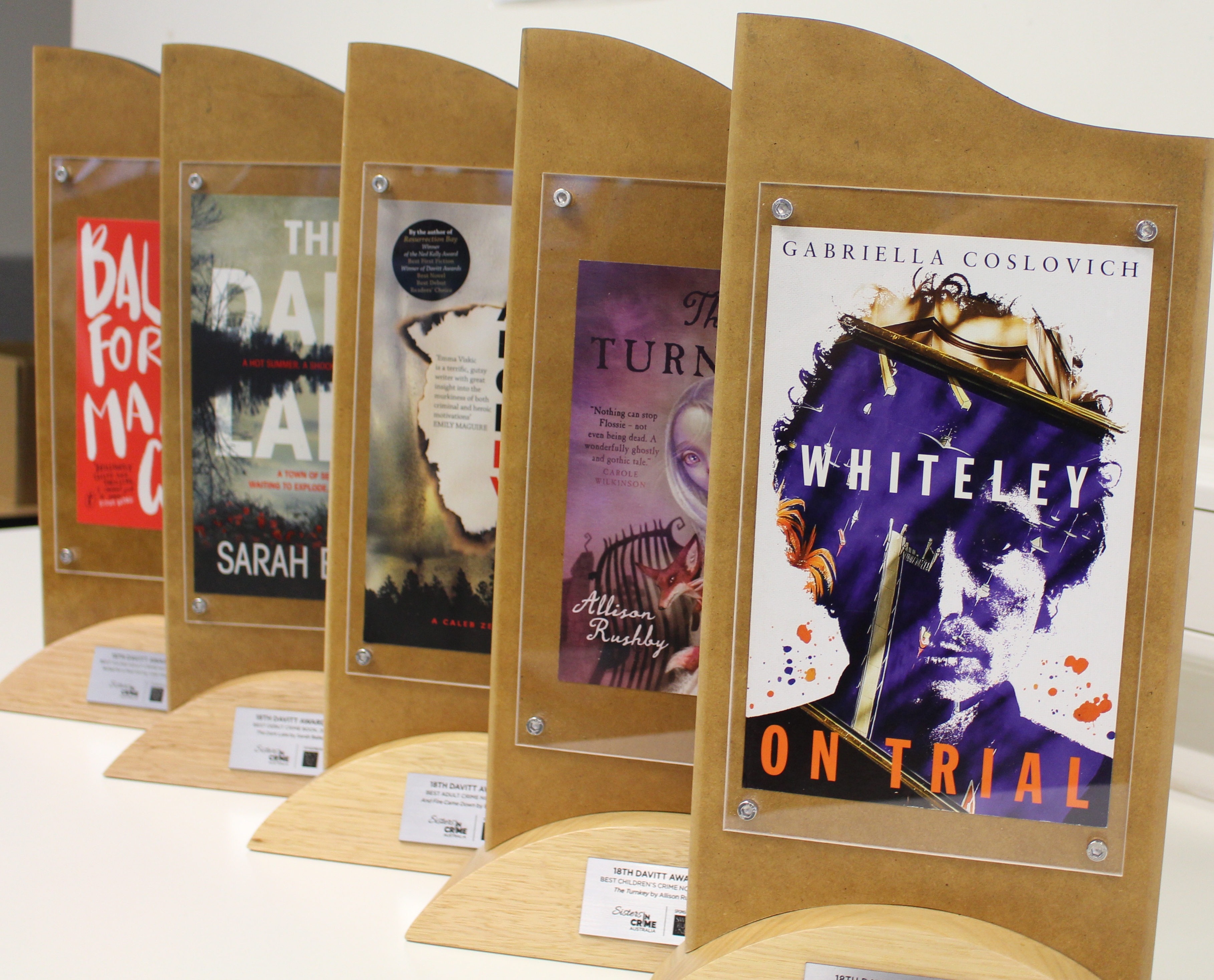 A record 127 books are in contention for Sisters in Crime Australia’s 19th Davitt Awards for best crime and mystery books by Australian women. This figure tips last year’s record by 16. An astonishing 73 adult crime novels have been entered. Almost  half – 49 books in total – are debut offerings.

“More and more women are turning to crime – and for good reason. Crime is the most popular – and best-selling – literary genre and it’s a broad church. Crime allows authors to apply the blow torch to contemporary issues whether it’s the gendered nature of so much violence or the dangers lurking in the dark web,” she said.

“When a lot of fiction has literally lost the plot (and a large readership), crime writing stands tall with compelling narratives, a keen sense of place, strong female characters and an acute sense of justice. And it’s not all deadly serious – there is lots of fun, lots of humour, and lots of irony. It’s just that the outcome is often deadly.”

Horwood said that a number of trends were already evident in this year’s Davitt entries.

“Crime continues to move from the mean streets of Australia’s major cities to small towns and the outback as evident in the books by Jane Harper, Aoife Clifford, Sandi Curtis, Sue Williams and Ellie Marney,” she said.

“Historical mysteries are increasingly popular with books such as Deborah Burrows’ ‘Ambulance Girl’ series set in the London Blitz and M J Tjia’s series featuring the 1860s’ London Eurasian courtesan sleuth. Often these books have a foot in both the past and present. L J M Owen’s novels skip from ancient cultures to modern-day Canberra while Kirsty Manning’s The Jade Lily is set in both wartime Shanghai and 2016 Melbourne and Toni Jordan’s book is located in 1938 New York and 1986 Brisbane.”

What Sisters in Crime calls ‘Tropic Noir’ is also in vogue, Horwood said.

“Crime has moved to the Tropics with Caroline de Costa’s series in Cairns and Candice Fox’s Crimson Lake books set nearby. Out in the Pacific, B M Allsop’s self-published police procedurals set in Fiji have met with much acclaim,” she said.

“Sisters in Crime is also pleased to see 17 Young Adult novels, 15 children’s novels and 22 non-fiction books in the mix. A lot of journalists have turned to crime – with some, like Rachael Brown, turning their award-winning podcasts into books.”

Horwood said that the number of crime books by Australian women had exploded over the past 19 years.

“Back in 2001 when the Davitts were launched at SheKilda, Sisters in Crime’s 10th anniversary convention, only seven books were in contention, though it’s true that non-fiction crime books weren’t then included. Nevertheless, a seventeen-fold increase in 19 years bears witness to just how the women’s crime writing wave has become seismic,” she said.

“The Dry is being produced by Reese Witherspoon who co-produced and co-starred in the Big Little Lies series with Nicole Kidman. The drama was based on the work of Liane Moriarty, the 2015 Davitt best adult novel winner. In June, HBO will be screening the second series which, this time round, also features Meryl Streep. Kidman will star in an adaptation of the Moriarty’s latest novel, Nine Perfect Strangers, which is under contention for this year’s Davitts.”

The film, Miss Fisher and the Crypt of Tears, based on Kerry Greenwood’s Davitt Award-winning series, is out later this year.

Details of the Davitt Awards ceremony will be announced shortly. Voting for Readers’ Choice Award by Sisters in Crime members will open on 10 June.

Anne Buist, This I Would Kill For (Text Publishing)

Kirsty Ferguson, What Lies Beneath Us (Elephant Tree Publishing) Debut

T J Hamilton, Echoes of the Past (Escape Publishing, an imprint of Harlequin Enterprises Australia)

Narrelle M Harris, A Dream to Build a Kiss On (Improbable Press)

Caroline Overington, The Ones You Trust (HarperCollins Publishers Australia)

Lee Winter, Under Your Skin (On the Record #2) (Ylva Publishing)

Allayne Webster, The Centre of My Everything (Penguin Random House)

Lili Wilkinson, After the Lights Go Out (Allen & Unwin)

Rebecca Lim, The Relic of the Blue Dragon (Children of the Dragon #1) (Allen & Unwin)

R A Spratt, The Mystery of the Squashed Cockroach (The Peski Kids #1) (Penguin Random House)

Leigh Straw, Lillian Armfield: How Australia’s first female detective took on Tilly Devine and the Razor Gangs and changed the face of The Force (Hachette Australia)

Grace Tobin, Deal with the Devil: The death of Matthew Levensen and the ten-year search for the truth (Penguin Random House) Debut

Cindy Wockner, The Pastor and The Painter (Hachette Australia)