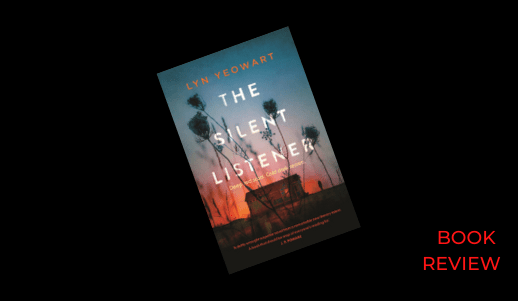 Lyn Yeowart’s The Silent Listener is a book that stays with you. Indeed, a trigger warning might be warranted. Its depiction of two children’s fearful vulnerability to their father’s corporal and psychological cruelty has the credibility to make you quiver as you read and to wince again as you remember what you read.

The setting for this novel, a struggling Victorian dairy-farm in the mid-twentieth century, resembles the one in Erina Reddan’s novel, The Serpent’s Skin. Like Reddan’s Jack McBride, Yeowart’s George Henderson exercises his dominion over his wife and children, the chief differences being that George is a Protestant and is sadistic and probably mentally ill.

Self-effacement is Gwen Henderson’s means of enduring. The insidious progression of her husband’s control is recounted in chapters describing the early days of her marriage in 1942. By 1960 she is a pale, buff presence “like a manila folder”.

George’s determination that his offspring will go to heaven manifests as browbeating and thrashing without regard for the incompatibility of this behaviour with the Biblical precept of loving kindness. A one-word order, “Room”, is enough to instil terror as a child is directed to wait in their bedroom for punishment.

Bookish 11-year-old Joy, Yeowart’s protagonist, survives by keeping stumm. She connects the admonitory message of the adage on the kitchen wall (Christ is the “Silent Listener to every conversation”) with her father’s reign. “If the hovering Christ saw one of them break a rule, he floated down to whisper in their father’s ear, and then it would start. The thump on the table, … the screams of eternal hell and damnation, his hot red face not ten inches away from the sinner’s.” Eels from the dam, converted to cheap meals in the Henderson kitchen, became anger writhing in Joy’s stomach.

It’s in the summer of 1960-61 that the family begins to fall apart. A young girl disappears from a neighbouring property, and then Joy’s brother uses subterfuge to leave home.

In 1983, when her father is dying, Joy is summonsed back to the farm by the town’s GP, a bumptious woman. Driving from Melbourne, Joy repeats to herself: “Never forget, never forgive”. Attributing proactively vengeful impulses to her mysteriously shadowy twin sister, Joy tells herself that simply seeing her father in excruciating pain will satisfy her.

The discovery of George’s dead body leads the local cop, Alex Shepherd, to put questions. No longer a silent listener, Joy spars with Shepherd, who regards her bravado as a defence mechanism born out of her childhood fear.

Reviewer: Robyn Walton. This review first appeared in The Weekend Australian 10-11 July 2021 and is reproduced with permission

Propelling the reader back and forth between the 1940s, 1960s and 1980s, The Silent Listener is an unforgettable literary suspense novel set in the dark, gothic heart of rural Australia.

In the cold, wet summer of 1960, 11-year-old Joy Henderson lives in constant fear of her father. She tries to make him happy but, as he keeps reminding her, she is nothing but a filthy sinner destined for Hell . . .

Yet, decades later, she returns to the family’s farm to nurse him on his death bed. To her surprise, her ‘perfect’ sister Ruth is also there, whispering dark words, urging revenge.

Then the day after their father finally confesses to a despicable crime, Joy finds him dead – with a belt pulled tight around his neck . . .

For Senior Constable Alex Shepherd, investigating George’s murder revives memories of an unsolved case still haunting him since that strange summer of 1960: the disappearance of nine-year-old Wendy Boscombe.

As seemingly impossible facts surface about the Hendersons – from the past and the present – Shepherd suspects that Joy is pulling him into an intricate web of lies and that Wendy’s disappearance is the key to the bizarre truth.