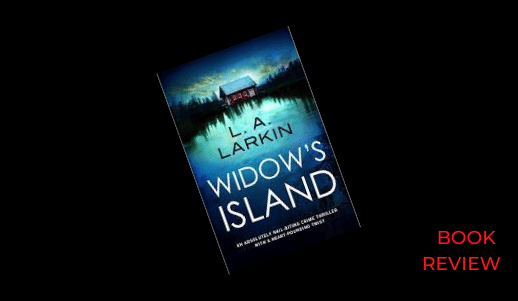 Widow’s Island opens on a peculiar, standalone first-person scene set in 2007. In it, an unnamed man and a woman named Emma are travelling on the Whisper Island ferry. By the end of the scene we know – this man is a killer, and he intends to kill again.

The action then jumps forward 10 years to the devastated Professor Stephanie Miller, whose whole life has been shattered by the death of her beloved husband, Patrick. His accidental death has also sent their teenaged daughter Amy into a spiral of anger – particularly with her mother.

Stephanie’s grief and Amy’s rage are compounded when Stephanie relocates them from Fayetteville, where too many memories make life painful, to isolated Whisper Island. Stephanie’s oldest friend, Jen, is there to give support but Amy’s not settling into school and Stephanie’s professional life is, with vicious outside help, going into a nosedive.

As a climate scientist, Stephanie teaches at the University of Washington. She is part of a campaign to raise a climate bill in the Senate, but life piles on. A concerted online hate campaign begins to undermine her work and paint her as at best unreliable, at worse a morally bankrupt flake – a campaign we soon learn is the result of a targeted trolling strategy.

Stephanie’s life is crumbling away, and she’s crumbling inexorably with it.

At the same time, the reader is privy to a threat Stephanie hasn’t yet seen coming. The serial killer from the opening chapter, having long ago killed that chapter’s Emma, has set his sights on her. We get glimpses into his plans, and we meet the FBI agent who is still looking for the serial killer who got away. The double threat of the vile and violence-inciting trolling and the slowly encroaching killer are the drivers behind Stephanie’s unravelling confidence, whose support systems (professional and personal) are failing.

LA Larkin states in her end notes that she wanted to create a “perfect serial killer victim” in Stephanie – someone “shy, vulnerable, grieving, lonely”. She sets Stephanie up almost too perfectly that way, and her helplessness and panic can verge on the exasperating. In true crime thriller fashion, she makes some poor choices that bring us to the climax, where the hate campaign, the killer and Stephanie’s vulnerability collide violently. We roar onto a finale in which Stephanie has to gather her scattered emotions, abandon her helplessness, and fight for her daughter and for herself.

Widow’s Island clips along at a great pace, building the tension and as Stephanie is cut off from family, friends and colleagues. Clues, both real and misleading, are scattered throughout so that the reader has no more certainty than Stephanie about who is behind the car crash her life has become – at least until those acting behind the scenes are finally revealed.

The story isn’t a byzantine psychological thriller – the themes, personalities and motivations are generally straight-forward and many characters fill archetypal roles – acting-out teen, lazy small town cop, tortured lawman, amoral capitalist – but the use of online trolling as a key plot element is a nice nod to concerns about social media, fake news and manufactured outrage.

Publisher’s description: Someone knows your secret. And they’re coming to find you…