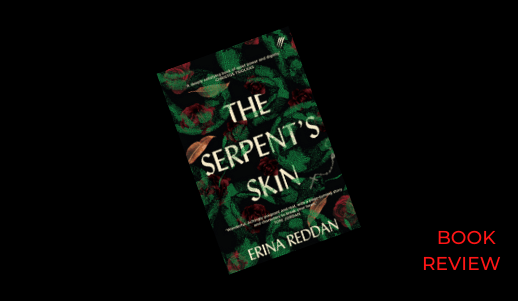 In The Serpent’s Skin Erina Reddan, a Walkley Award winning former foreign correspondent, draws readers into a stressed dairy-farming family in Victoria in the 1960s.

In marrying Jack McBride, a devout Catholic, Sarah chose “love and dirt”. With repeat childbearing, endless work and poverty, her lot has been hard. And, for all their bantering and energy, her four kids have it tough too.

Jack is hypocritical: outside the farm he is a good bloke occupying respected lay positions in his church while at home he is “shouty”, shutting down reasonable inquiry. As Reddan tells it, such power imbalances are facilitated by the patriarchy and can be a pre-condition for harm, even law-breaking.

After Jack is evasive and dishonest about the reasons for Sarah’s sudden disappearance and death, mistrust and bitterness fester in ten-year-old Jane (“J.J.”), Reddan’s protagonist. The ruling metaphors of Reddan’s novel emerge organically from the rural environment. Snakes hibernating in winter, “lurking below the surface”, and snakes shedding their skins in summer, present a cycle in which J.J. discerns a range of meanings, from latent anger through to renewal.

Reddan gives her protagonist distinctive, poetic turns of phrase. Here is J.J. describing how her rage diminished outdoors: “All that soft: the pale of the blue in the sky, the brush of the gold in the paddocks and the clear of the air in between, and all of it going on and on until it reached the end of the world. Melted away the red in me like butter.”

As an unsettled young adult with a boyfriend and a motley substitute family of fellow boarders, J.J. remains tormented by her father’s failure to tell the truth. Time passes, with the scattered McBrides staying in touch in an Irish-Catholic “tribal” way, until in 1982 the siblings reassemble at the decrepit farmhouse, J.J. having organised their reunion in hopes of goading their ageing father into revealing the facts after “all these long, rusty, lying years”.

Reviewer: Robyn Walton. This review first appeared in The Weekend Australian 10-11 July 2021 and is reproduced with permission]

It’s a cold and wintery night in 1968 and ten-year-old JJ’s mother isn’t home. The cows are milked, the pigs fed, and her dad won’t answer any questions.

Sarah is the lifeblood of their family, and her absence throws everyone off course: Tessa takes charge, Tim gets in trouble, Philly retreats, and JJ blames herself. Their father works hard to keep up appearances, but something’s not right. It’s always been JJ’s job to cause trouble, and when she can’t leave the clues alone, her sleuthing wreaks havoc in their tight-knit community, and she swears off troublemaking for good.

Fourteen years on, JJ has a new life, a loving partner and a good job. But she puts it all in jeopardy when she stumbles across a chance to solve the dark mystery of her childhood. While pretending to have made peace with it, she organises a final farewell for her mother so they can all put the past behind them. Will the explosive truth finally set them free?