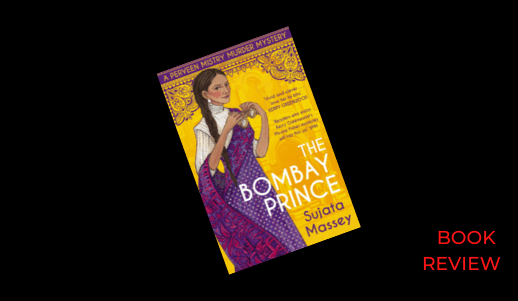 The third in Sujata Massey’s Perveen Mistry series is set during a period of political unrest and violence sparked by the arrival of Edward, Prince of Wales (and the future King Edward VIII) on a tour of India in 1921.

The story opens with a college student, Freny Cuttingmaster, visiting Perveen for legal advice on whether she can be expelled for refusing to attend the Prince’s procession as his entourage passes the school. She’s one of only a few female students and concerned that she won’t bring disgrace on her family by getting in trouble, while also wanting to express her desire for independence.

Perveen Mistry is at Freny’s college on the day of the Prince’s procession, visiting her English friend Alice who teaches there. Dramatic events unfold and the procession, which become more dramatic and personal as Perveen and Alice discover Freny dying in the school grounds, having apparently fallen from a second-floor gallery.

This sad coincidence puts Perveen at the heart of the book’s multiple dramatic storylines – Freny’s mysterious death; the Prince of Wales’ presence in India; and the related violence in Bombay, in which neighbours are turning on each other. Perveen is targeted herself, as a Parsi woman, but she sees the effects of violent division everywhere.

Perveen’s life is all about divisions and acceptable behaviours: as a woman practising law at a time and place where this is rare; as a person representing the law in the context of a society of different religious practices; as a divorced woman who society will judge.

This latter is highlighted, as it was in The Satapur Moonstone, with the re-appearance of Colin Sandringham – the government official who assisted Perveen to solve that book’s mystery. Colin, an old school friend of Prince Edward’s, has been summoned to in Bombay to form part of the Prince’s retinue. Perveen’s brief and awkward encounters with him are a reminder of the fondness they developed for each other over the course of that book, and all the impropriety and impossibility of any relationship between them.

The Bombay Prince isn’t really a story very focused on a murder mystery. Rather, it’s a setting of turmoil with multiple threads of social upheaval, with Freny’s death a significant thread running through the whole.

Perveen tries to navigate the heightened danger of Bombay, do her job well, and try to understand what happened to Freny. She follows that thread which seems so thin at the start, but by the final chapters we know she is coming to the end of it, and that we’ll discover what really happened.

Like its predecessor, The Satapur Moonstone (and presumably the first, A Murder at Malabar Hill, which I haven’t yet read), The Bombay Prince is rich in cultural and historical detail without bogging down the story’s progress with graceless info-dump.

Instead, it’s an intricate tapestry of a story and a fascinating insight into a complex culture. With the intelligent and kind Perveen as our guide, we get to be immersed in her world – and to watch Perveen, despite all the challenges of her life, unravel the knots (if you’ll pardon the extension of the threads metaphor) to get to the truth.

November, 1921. Edward VIII, Prince of Wales and future ruler of India, is arriving in Bombay to begin a four-month tour.

The Indian subcontinent is chafing under British rule, and India’s only female lawyer, Perveen Mistry, isn’t surprised when local unrest spirals into riots. But she’s horrified by the death of Freny Cuttingmaster, an eighteen-year-old student who falls from a second-floor gallery just as the prince’s grand procession is passing by her college.

Freny had come for a legal consultation just days before her death, and what she confided makes Perveen suspect that her death was not an accident. When Freny’s death is indeed ruled a murder, Perveen knows she can’t rest until she sees justice done.