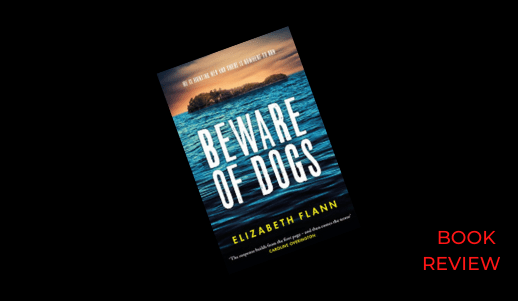 Elizabeth Flann’s Beware of Dogs won the Banjo Prize for Fiction in 2019 but owing to Covid-related production delays was not published until this year. It’s a carefully crafted cross-genre tale open to multiple readings: a contemporary castaway’s ordeal, a crime suspense story, a correlative of a psychological escape endeavour, and an exemplar of urbanised humanity’s need for the natural environment.

Flann’s adult protagonist, Alix Verhoeven, was reared in the cowed household of a religious zealot. Now circumstances force her into recalling that time and examining herself: what does she stand for if not her father’s faith?

The story opens with Alix hiding in a shallow cave on an uninhabited island off the south coast of Victoria. Two menacing men are searching for her, she believes. Alix’s predicament began when, facing being alone over Easter, she accepted an invitation from an acquaintance to join him and a mate on a coastal holiday. After being brought to the island and overhearing enough to recognise the men were serial sexual abusers, she ran.

As days pass, Alix’s rescue from her isolated, tech-free location looks unlikely, yet she remains disciplined, surreptitiously fetching water and foraging for native foods. By night she suffers bad dreams and memories. After years of self-protectively avoiding thinking about her Northern European missionary father, he occupies her mind.

Verhoeven’s oppressive rule over Alix and her brother and mother was at its worst on another island, Madagascar, where he was subjecting the Malagasy people to conversion efforts. Alix was sadistically punished for questioning anything in the Bible or breaking any of her father’s rules. Reliving one incident, she is back in the Punishment Room. “I don’t know what I have done, but it is a four-beatings punishment.”

For Alix and her brother, escape took the form of entry into other places of limitation and privation, a boarding-school and a seminary. In adulthood the two have scarcely communicated, let alone confronted their father.

In her state of extremity, Alix still cannot believe in the heaven and hell her father preached. Nonetheless, “Pray for me” will be the last words Alix writes in her field diary.

Not much daylight left now.

So begins the field diary of Alix Verhoeven, whose impulsive acceptance of an offer to spend Easter on a remote island has turned into a terrifying ordeal. Hiding in a tiny cave, she carefully rations out her meagre supplies, while desperately trying to figure out how to escape the men hunting her. She is determined not to be a victim.

What do they want with her? She knows it’s nothing good – she overheard enough on that first night to flee. But now she’s got little food or water, no way of calling for help, and only her skills as an exploration geologist and memories of Atkinson’s Bushcraft Guide to survive.

By day she is disciplined and lives by strict plans, but at night she finds herself haunted by questions about her life that she has never wanted to face.

And her time is running out.