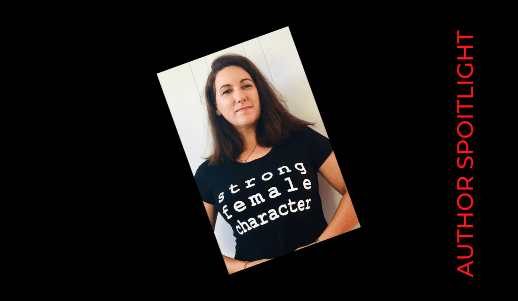 Robyn Walton, Sisters in Crime’s Vice-President, spoke to New Zealand author, Kirsten McKenzie, about her crime novel set during a 1966 flood in Florence, The Forger and the Thief (Squabbling Sparrows Press).

What an intriguing book, Kirsten. A dramatic moment in modern history, crimes small and large, and an unusual narrative structure. Will you tell us a little about why you chose the setting and date?

A few years ago, I was reading a book (that I’ve sadly long forgotten) with one line about a terrible flood in Florence in the 1960s and the ‘Mud Angels’who helped rescue the water-stricken contents of museums. My attention was caught by this line, and I abandoned the book I was reading to look up the flood. I couldn’t believe I’d never heard of it.

At the time I was working in the family antique store, and there’s an old adage in the trade that ‘every antique has been stolen at least once in its life’, and the idea of The Forger and the Thief was born.

Could there be a more perfect opportunity to steal priceless art and antiquities than during an apocalyptic flood with hundreds of good Samaritans all rushing to help?

I suspect you had fun creating this novel? What kinds of research did you do?

My family and I travelled to Florence in December 2019 and, as fate would have it, we stumbled upon a photographic exhibition detailing the 1966 flood, complete with artefacts and eye witness accounts in English. What a coup! Many notes were taken.

I also toured the city searching out the highwater flood markers. There’s a tour you can do to find them all, as the 1966 flood wasn’t the first time Florence has been inundated.

The most interesting part of my research was reading all the first-hand accounts from the ‘Mud Angels’. It was a terrible disaster, but for the visiting art students from America it was the adventure of a lifetime.

Your characters don’t know each other at the beginning, but as danger rises their storylines start overlapping. Could you introduce us to your characters and the issues confronting them? 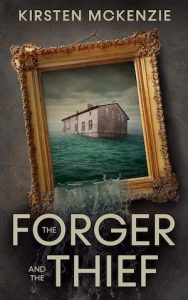 The first draft of The Forger and the Thief was written purely from the viewpoint of Richard Carstone, the ‘wedding guest who should never have been invited’. Carstone’s secret was the initial driver of the early draft, as he travelled to Florence in an attempt to woo his brother’s wife. Once you’ve read the book, you’ll recognise how far it progressed from its early stages of life. Carstone isn’t likable, but he has a heart, deeply buried. And my one hope is that the reader can uncover that softness in him.

Stefano Mazzi was the hardest character to write, mainly because his story is both sad and devious, with a secret so dark he doesn’t deserve any sympathy. Or does he? I found some uncomfortable delight in leading the reader along Mazzi’s path. And the end of his story was with me from the beginning. People do terrible things during terrible times. But they do what they have to do to survive… What would you do?

I’d read the book The Monuments Men before I’d seen the movie, and it’s just as well, I had as they are two very different beasts. I was well aware of the many pieces of art looted by the Nazis and still missing. Some were destroyed during the war, but where are the rest? I imagine they’re in basements and attics, and on unsuspecting walls. But perhaps they were packed away in soldier’s kit bags and transported back to America or England?

Even today, nearly 80 years after the end of World War II, the descendants of the owners of the looted art are still searching for their treasure. Daughters, granddaughters, great nieces. Hence the creation of Helena Stolar.

Fourth, the PolicemanAs an ex customs officer, I’ve worked with plenty of men like Antonio Pisani – old and disillusioned with their lives. Working in enforcement in the public sector burns you out as you tend to see the lowest points of the lives of the people around you. You don’t see people at their best; you’re interacting with either the victim or the suspected perpetrator. And that clouds your view on life, as it has Pisani.

As the book is set in 1966, I tried to portray him as a man challenged by women in the workplace. A man resistant to change or modernisation, as I imagine many men were in the 60s. But people can change, and that was the challenge with Pisani.

It was one of my Beta readers who changed the direction of this character, her reasoning being that the wife had been through so much and needed something more. It was after that feedback that I changed her ending. Can’t say too much, but suffice to say that is one of my favourite parts of the book!

This character is actually named after one of my readers. I asked permission to use her name, and I’m incredibly thankful that she said yes. The real Rhonda is blessed with the most incredible blue eyes, and they haunted me as I wrote her scenes. I needed to see justice done.

And Sixth, the River

I wrote the River chapters at the end, after I’d finished writing the narrative for the five main characters. The chapters told from the River’s viewpoint were done in a day, and they are some of the best writing I’ve done (hopefully the readers agree!).

After researching the origins of the flood, it was obvious to me that humankind’s interventions had only made the devastation worse, through deforestation, farming on wetlands, diverting watercourses. As we see now, with out of control fires, landslides, floods, massive heatwaves, our wanton disregard for nature is killing us. Which is exactly what the Arno River did in 1966. She killed over 100 people, many of them poor and elderly. And, sadly, we haven’t learnt from our mistakes.

I noticed a reference to Duca Lamberti, the protagonist in a noir crime series. Can you tell us more?

As I was setting a book in a different time-period, I didn’t want to spoon feed the readers by saying ‘and in 1966’… So, like fairydust, I sprinkled through references to the times: fashion, sports, smoking, cars, current events. And one of those references was mention of the Italian police officer Duca Lamberti, and I’m abnormally happy that you picked up on it! Lamberti was the fictional character in four crime noir novels by author Giorgio Scerbanenco, with the first two published in 1966. The timing couldn’t have been more perfect.

In a lot of ways this is a visual book. I could imagine a screen adaptation. Any thoughts on that?

I would love to see this transferred onto the screen. As I’ve done a fair amount of work on both film and television, mainly as an extra, not in any starring role, I find it easy to visualise how a scene may work. And you’ll often see me sitting at my desk, or in a cafe, randomly waving my hands around as I try to work out a character’s movement through a scene!

A character in this novel also featured in one of your earlier novels, Painted. Can you tell us about this?

I never meant for the artist Leo Kubin to appear in The Forger and the Thief. It’s almost like he slipped in under the cover of darkness and made himself at home. Typical. But once he appeared, it was easy to shape the younger Kubin into a shadowy player pulling the strings. I enjoy building in references to characters from my other books, almost as a reward for readers of my other work. I know we’ll meet Kubin again. He’s such a deep and fascinating character that I need to work with him some more. His origin story needs to be written.

Finally, Kirsten, where can we buy your novels, and in which formats are they available?