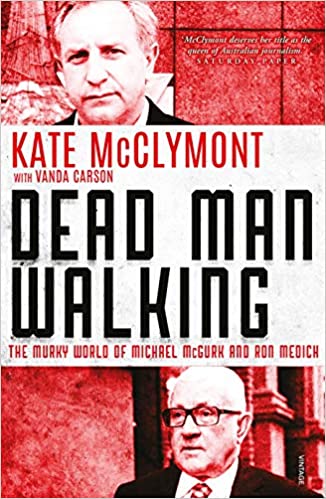 Rumour has it that Sydney is full of corruption and crime, but no one expected to read about a Sydney businessman being shot, in the back of his head, in his driveway, in Cremorne. Nor that, ultimately, a Point Piper millionaire would be convicted for ordering the hit. But this is not just a Sydney story. Its strands traverse Moscow, Brunei, Indonesia and Hawaii and involve property deals, fraud, conspiracy, false identities, kidnapping and a miniature Koran. There are bumbling criminals, turncoats, snitches, wealthy people brought down, and devastated families.

Just prior to his murder, Michael McGurk – who had a history of violence, threats, arson charges, intimidation and failed businesses – had informed Kate McClymont, Australia’s best-known investigative journalist, that he believed there was a hit out on him. They agreed they would meet, and then he was shot.

This is an extraordinary story of ten years of events that you simply could not make up.

The nature of true evil is sometimes tawdry and wears a flashy tie.  In Kate McClymont’s new true crime story, Dead Man Walking, two protagonists with poor taste lock horns over business deals gone south. Michael McGurk, labelled  ‘the sociopath next door’, is not averse to applying enforcer tactics to get his way; the other, Ron Medich, less charming and more of a ditherer, achieves his final solution by exploiting an array of ‘bumbling amateurs’.

Winner of multiple Walkley Awards, McClymont, along with the assistance of super-sleuth, Vanda Carson, consolidates more than a decade of her trademark investigative journalism in this tale. On the evening of September 3rd, 2009, two intoxicated stooges, Haissam Safetli, then 45, and Christopher Estephan, 19, set out to kill McGurk. The brazen, cold-blooded murder, committed in front of the family home in Cremorne, shocks Sydneysiders. It will be another nine years before the main protagonist, the man who ordered the hit, is held to account.

The cast of characters in Dead Man Walking is a motley assortment of underworld figures, corrupt developers, and seedy wannabes. Like Arthur Daley on steroids, McGurk is a seasoned conman and swindler. Paying no one for their labour and even scamming other parents at his kids’ school, he takes whatever he can get away with.  Apart from close family, few associates seem upset by his passing. Some say he had it coming.

But why was Michael McGurk killed? McClymont examines the extent of his complex business dealings with millionaire property developer, Medich, and how their paths fatally cross. When the property market plunges after the GFC, Medich assigns a debt on a Point Piper property to McGurk. He wastes no time trying to collect, even resorting to arson. McGurk faces charges and he and Medich become embroiled in a bevy of lawsuits. Each claim the other owes him millions.

Enter Fortunato ‘Lucky’ Gattellari, the former champion boxer, chosen to organise Medich’s deadly enterprise. Lucky has done some insurance jobs for Medich and they are ‘joined at the hip’, sharing dodgy business partnerships, ‘boozy’ lunches, and massage services. Out of a twisted sense of loyalty, Lucky is persuaded by Medich to set up the shaky chain of command.

Why the authorities take so long to lay charges is due in part to the long list of ‘associates’ with motive. These are dangerous individuals who take extreme risks and switch loyalties without compunction. For instance, it was never fully concluded who held the gun that killed McGurk. Safetli sniffs out a deal that gives him a sentence discount by agreeing to testify against Estephan. However, when the time comes, he prevaricates. The judge states that Safetli is “utterly unreliable” and the charges against Estephan are dropped.

From inside the Lithgow Correctional Centre, Gattelari, serving time for his part in the murder, meets with Roger Rogerson and Glen McNamara, who are simultaneously organising a murder of their own.  The mad slapstick they discuss is a plan to extort millions from Medich for favourable testimony in his upcoming trial. The plan is foiled.

The effortless journalistic pace makes reading a pleasure – there is a mountain of detail, but the reader is by no means overwhelmed. The writer’s wry sense of humour embellishes the text but never detracts from the grim subject matter. Chapters such as ‘The Miniature Koran’ and ‘Big Jim and the Krispy Kremes’ develop intrigue for the reader. They become stories within the story.

Shakespearean in its scope, the story is a tangled web of deceit. But McClymont never wavers from her task; to construct a clear, forensic picture of the era and its shady underworld machinations. Just days before his demise, McGurk signalled his concerns about death threats in a phone call to McClymont and they arranged to meet later that week. By then he was dead. She regrets not informing the police about the call until it was too late.

In a recent interview McClymont said that 20% of her time is spent dealing with ‘defamation black holes’. The current climate of litigation and industry change is challenging, but her employer, the Sydney Morning Herald, gives her enough rope. With her courage and conviction to run the gauntlet, including death threats to herself, McClymont may be part of a dying breed.

McClymont’s first long publication, He Who Must be Obeid, investigates corruption in the NSW Labor Party’s tumultuous years in power and will be added to my reading list.