New Zealand is a country of firsts, and Rotorua Noir was its debut crime fiction convention, held over the Australia Day weekend, 2019. The venue, appropriately the Shambles Theatre, was small, but a perfect confab resulted.

Writers appeared from NZ, but also Australia (Michael Rowbotham), Iceland, Finland and the North of the British Isles. Rotorua is a Māori centre, congoers experiencing a pōwhiri (closest Australian equivalent being Welcome to Country) at the Ohinemutu Marae.

Opening the convention was the panel ‘Fergus and the Dame’, about New Zealand’s rich history of crime writing, with Vanda Symon, Ngaio Marsh biographer Joanne Drayton, and yours truly talking about Fergus Hume, the New Zealand author of The Mystery of the Hansom Cab, the blockbuster novel lublished in Australia in 1886. 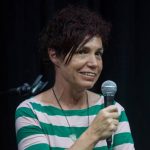 Cross-Tasman or ‘Ditch’ writers figured – Alan Carter living in Tasmania but writing about Marlborough, Josh Pomare born in Rotorua, affiliated with Ngapuhi iwi, but living in Melbourne. His debut Call Me Evie (Hachette) was launched at McLeod’s Bookshop. Jennifer Lane (left) won the debut novel section of the Ngaio Marsh award, and her Australian publisher is Clan Destine Press. [Jennifer will be speaking at Sisters in Crime’s event on Friday 14 April  at the Rising Sun in South Melbourne.)

New Zealand is a smaller market than Australia, but has writers with an established international reputation and local settings, such as Vanda Symon and Paul Cleave. These two were quizmasters at the convention quiz (at which the most Australian team was relieved not to come last). New author Nathan Blackwell, author of The Sound of Her Voice, is an Auckland cop, but his initially self-published novel made an international sale.

The sheer variety of voices was astounding, from police procedurals to genre-blenders, self-published to overseas deals. Film-makers appeared, including Michael Bennett, whose In Dark Places is both a documentary and winner of the inaugural Ngaio for non-fiction.

A constant presence was Māori culture, the convention beginning and ending with cultural leader and writer Ngahuia Te Awekotuku. Organisers Craig Sisterson and Grant Nichol were debut conrunners, but with most impressive results.

Dr Lucy Sussex was born in New Zealand, and has written extensively on women’s crime fiction. She is currently collaborating on a book on Mary Fortune.