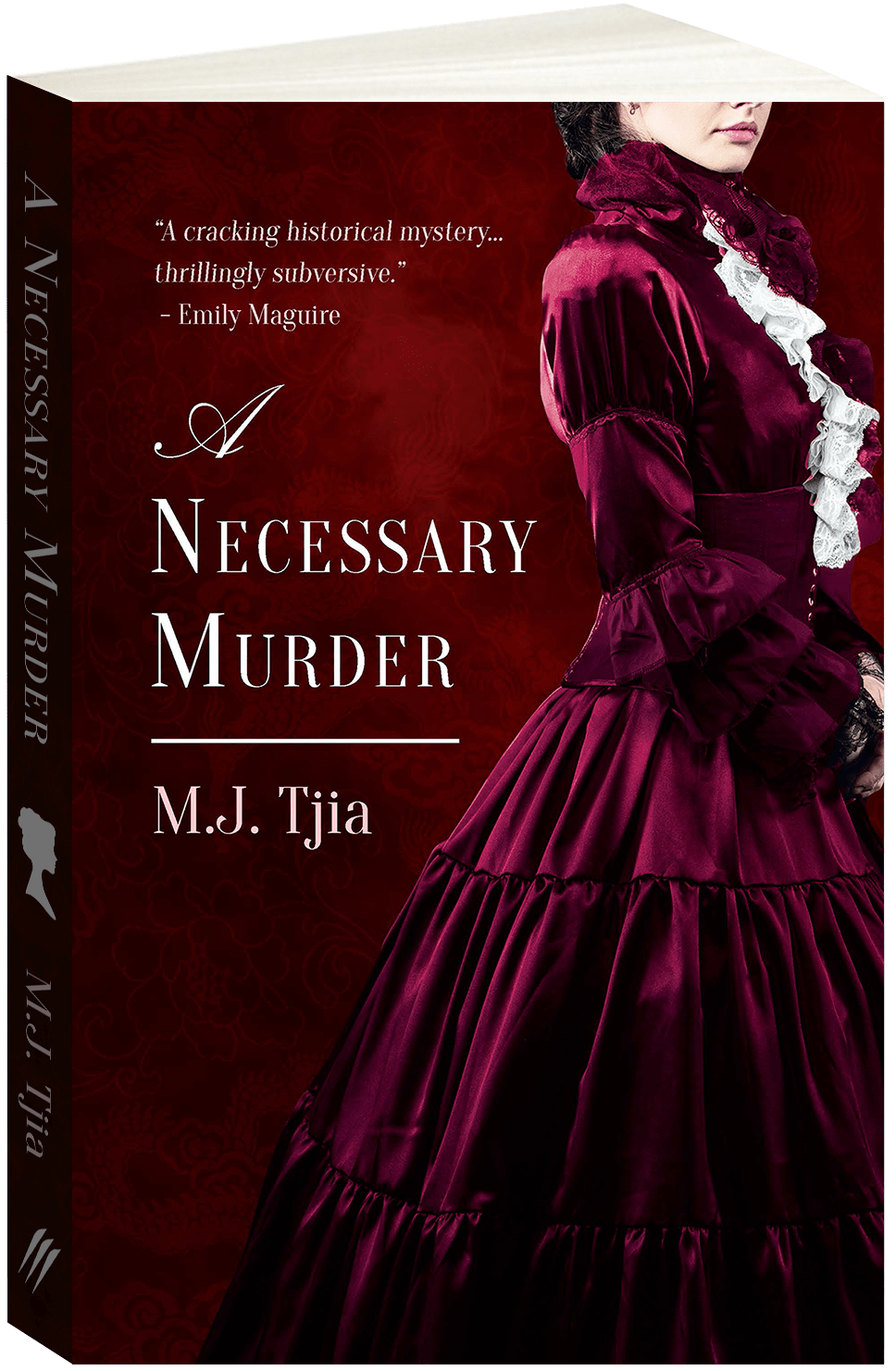 Stoke Newington, 1863: Little Margaret Lovejoy is found brutally murdered in the outhouse of her family’s estate.

A few days later, another victim is found on the doorstep of Eurasian courtesan and professional detective Heloise Chancey at her prestigious address. At the same time, Heloise’s mother, Amah Li Leen, must confront events from her past that threaten her present.

In a maelstrom of murder and deceit, Heloise is caught up in a crime that reaches into the very heart of her existence.

Stoke Newington, 1863: little Margaret Lovejoy is found brutally murdered in the outhouse at her family’s estate. A few days later, a man is cut down in a similar manner on the doorstep of courtesan and professional detective Heloise Chancey’s prestigious address during one of her soirees.

Last year, I read M.J. Tjia’s debut novel, She Be Damned and was impressed by her different take on the crime genre. Instead of the hard-boiled detective fare we are so accustomed to, M.J. Tjia sets her novels in London’s 1860s. Her protagonist, Heloise Chancey, is a courtesan and professional detective who uses her cunning and smarts in both professions.

As a protagonist, Heloise Chancey is a breath of fresh air. She is gutsy, self-centred, and not afraid to seek her own fulfilment. She must also carefully navigate the world of men to achieve her goal of solving crime. She has none of the wilting violet aspects of stereotypes of the era. In A Necessary Murder, Heloise goes undercover as a nursery maid in the home of the Lovejoys – after a second Lovejoy meets a violent end. In her charge is little Cyril who Heloise has absolutely no affinity with. She’s not above bribing him with a caramel or taking him with her while she’s investigating. Scenes between these two characters bring a lot of humour to the book.

Heloise is mixed race and her mother, Amah Li Leen lives with her, acting as a lady’s maid. In A Necessary Murder, part of Amah’s backstory is revealed when men connected to her begin turning up dead. Amah, must confront events from her past that threaten the safety of their household. Readers love equally the feisty women at play in M. J. Tjia’s books, but also love the backstories of Heloise and her mother.

Because she is a woman of independent means, Heloise is free to make her own decisions about where she can go in order to find the killer. Heloise’s world is vividly described within the ambiance of 1860s London: horses and carts, chamber pots emptied in the cobblestoned streets, corsets, and the warmth of a hearth fire. Lots of red herrings and suspicious characters to keep the reader guessing.

The Heloise Chancey mysteries are a fabulous way to spend a cosy afternoon. Preferably in front of a roaring fireplace if you can find one.

Heloise Chancey is a heroine who reminds me of Phryne Fisher, with her penchant for fine clothes, handsome and wealthy men, and an appetite for adventure. The characters’ backgrounds also seem somewhat similar, but that’s where the likeness ends. Heloise is a courtesan who has become wealthy through that profession and still depends on her current lover, who is conveniently out of the way when the murder count starts rising.

Reports of the horrible killing of little Margaret Lovejoy cause disbelief and sadness in Heloise’s “set”, but when Margaret’s father is also killed in the same gruesome manner, her friends start to worry they might be next. Like Lovejoy, they survived a riot in Sarawak decades before and they fear the remaining Chinese kungsi are out for revenge.

At the request of police Detective Inspector Hatch, Heloise goes undercover as a nursemaid to spy on the Lovejoy household. Unbeknown to Heloise, her maid, Amah Li Leen, embarks on a search for Heloise’s seaman cousin, Jakub, fearing that he could be involved in the murders, especially as a man from Amah’s past is killed on Heloise’s doorstep. Through Amah’s search for Jakub we learn of her early life and her connection to the victims. It was frustrating that she didn’t share her concerns with Heloise, but understandable due to her tough, independent attitude.

The murders become increasingly more horrific, but unlike some crime novels, the gore isn’t blatant and not dwelt upon. Plot threads are tied together neatly at the end.

The characters are well-drawn, and enough information is given about their backgrounds to make them “come alive” for the reader. Through Heloise’s undercover role we are given an insight into the restricted lives of the poorer classes. It also lets us see that Heloise isn’t as cold and unfeeling towards children as she purports herself to be. Forced to battle for everything in life, she fiercely defends her courtesan status and rarely lets anyone know her innermost feelings.

At times I felt the descriptive passages might be a little longer than necessary, but the pace didn’t falter, and the style actually allowed the author excellent opportunities to plant clues and red herrings, as well as evoking images of the disparate living conditions of London dwellers of the era.

Although we learn a fair bit about Heloise’s past, there are enough gaps there that make me want to read She Be Damned, the first in the Heloise Chancey Mysteries series.

Heloise Chancey is a fine addition to the historical fiction female sleuth line-up.