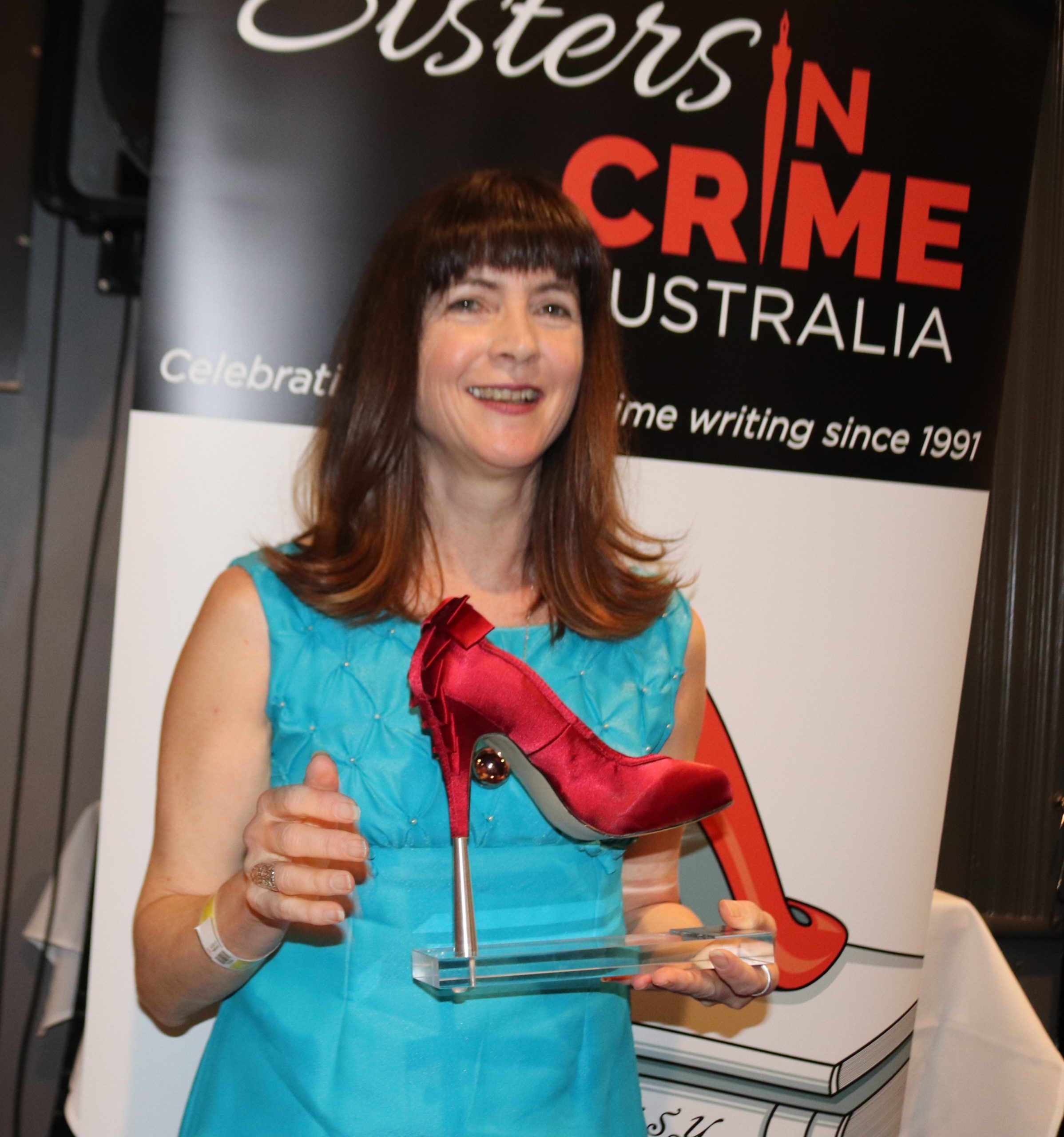 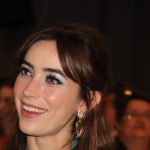 As well as winning Swinburne University of Technology First Prize ($1500), Clark’s story, “At Length I Would Be Avenged”, also took out the Melbourne’s Athenaeum Library’s Body in the Library Prize ($1000).

Clark said that title came from Edgar Allan Poe’s The Cask of Amontillado.

“As a teenager I loved Poe’s Gothic rage and the words were in keeping with my setting, which was inspired by a photo of an abandoned American library. The voice of the dead librarian came to Blanche when I looked at the photograph wouldn’t go away until I wrote her story. As much as it’s a whodunnit, it’s also about the friendship that develops between the dead librarian and a homeless girl, who helps her find her killer,” she said.

Clark attributes her perseverance to winning the Melbourne Review Short Story Competition in 1995 plus the highly commended certificate she received in the Scarlet Stiletto Awards back in 2010. She also took home the coveted stiletto trophy, a scarlet stiletto shoe with a steel stiletto heel plunging into a mount.

“The Scarlet Stiletto Awards continue to uncover the most astonishing array of female criminal talent. For all of us, not just men, it’s lucky women’s darker impulses and imaginings can be channelled into fiction rather than being put into practice”, said Carmel Shute, Sisters in Crime national co-convenor.

“This is just as well as this year there were some deeply satisfying tales of revenge as well as women meting out justice from beyond the grave. Not surprisingly, aged care is an increasingly popular scene of the crime.”

Of the 184 stories submitted this year, 29 were shortlisted with 15 prizes, and $10,060 in prize money, awarded. awarded. Over the past 26 years, 3655 short stories have been entered with 27 Scarlet Stiletto Award winners and other category winners going on to have crime books published. 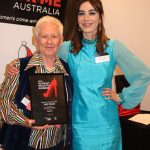 Adelaide author Bridgitte Cummings won the Sun Bookshop & Wild Dingo Press Third Prize ($500) for her story, “The Fossil Hunters”. Cummings has had stories published in Australia, Ireland and the UK and is currently working on a supernatural thriller set in a remote South Australian school.   (Cummings was unable to attend.) 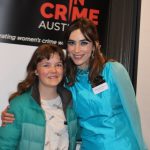 Thirteen-year-old Lyra Philp (Apollo Bay, Vic) won the Elephant Tree Publishing Young Writers’ Award under 19 ($500) for “Death by Couch”. She was inspired to write a story about a killer couch was because she went to a crime writing workshop at the Apollo Bay Word Fest where the presenter Angela Savage [whom incidentally won the Scarlet Stiletto in 2011] was talking about someone with a name like David Kellercowel and she thought it was David Killer-Couch.

The Mystery with History Award ($750) presented by Every Cloud Productions, the producers of both the Peregrine and Phryne Fisher series, went to government lawyer Eugenie Pusenjak (Theodore, ACT) for her World War 11 story, “Loose Lips”. Pusenjak’s  stories have been previously published in the UK anthology Zonal Horizons, as well as a number of anthologies produced by Stringybark Press in Australia.  (Pusenjak was unable to attend.) 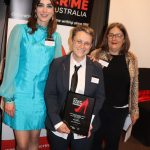 The Melbourne Athenaeum Library Body in the Library Runner up Award was won by Dr Kelly Gardiner (West Heidelberg, Vic) for her story, “Death in the Catacombs”, set in Melbourne’s State Library. Gardiner teaches creative writing at La Trobe University and has written a number of prize-winning books for Young Adults. Her new series is the time-slip trilogy, The Firewatcher Chronicles. (Right is Barbara Gliddon, Vice-President of the Melbourne Athenaeum Library.) 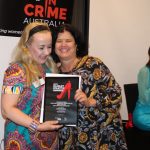 Warooka (SA) journalist and teacher, Kristen Murdock, is set for a three-month residency in Old Melbourne Gaol thanks to winning Writers’ Victoria Award for the Most Satisfying Retribution for her story “Plenty More Fish”. Poisons are generally her weapon of choice and having lived in rural SA for most of her life, her next project is a farm-based crime novel. She won the Malice Domestic Award in 2010 for her story “Sally’s Sea Change”. (Pictured with Tara Mitchell (r) representing Writers Victoria.) 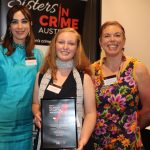 The International Association of Forensic Linguists Award ($800), now in its second year, was won by speech pathology student, Jaimee Sharrett (Lynwood, WA) for “Marie’s Voice”. She is currently writing an adventure novel for kids. (Pictured with Dr Georgina Heydon (r).) 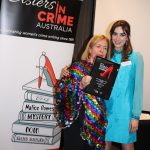 Cairns obstetrics and gynaecology professor, Caroline de Costa was awarded the Kerry Greenwood Malice Domestic Award ($750) for “Screwed”. De Costa has published three novels in her Detective Cass Diamond series, set in Cairns; the first, Double Madness (2015), was shortlisted for the Davitts in 2016 and this was followed by Missing Pieces (2018) and Blood Sisters (2019). 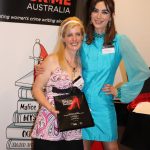 The HQ Fiction Romantic Suspense Award ($500) went to Sandi Wallace (Mt Dandenong, Vic) for “Sweet Baby Dies” Wallace won the Harper Collins Romantic Suspense Award in 2016 and 2018. She was also highly commended for “Abandon”. She has made the shortlist on six occasions since 2013 Her fourth rural thriller is due out next year. 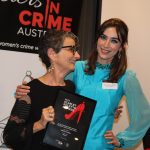 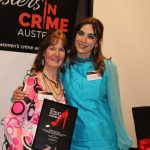 A brand-new award – the Terror Australis Readers & Writers Festival Award for Best Bushranger Story ($500) went to Missy Jane Birch (Werribee, Vic) for “The Emerald Lady”. With eight direct ancestors who were convicts, and at least five others in her extended family, Birch has always been fascinated with this part of Australian History. She has previously published non-fiction works exploring World War Two and Ned Kelly and Knox Historical Society short story competition. 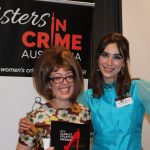 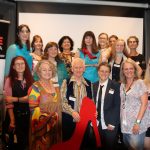 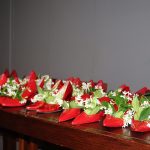 Hakewill also launched Scarlet Stiletto: The Eleventh Cut (ed. Phyllis King), a collection of the 2019 winning stories, is available from Clan Destine Press as an e-book for $5.00 https://www.clandestinepress.net/ or iTunes, Amazon and other platforms for $5.99.

To read what was said about the authors, their stories and much more, read Scarlet Stiletto Awards running sheet 2019 – website