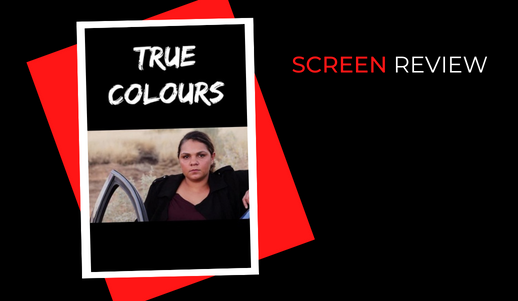 This four-part TV series – the first ever NITV-SBS Drama co-production – is a slow burn.

A young woman from the fictional remote community of Perdar Theendar dies after a car accident. The accident was in an area reserved for men’s business and the accident isn’t the cause of death. Detective Toni Alma (played by Rarriwuy Hick) is sent to the community to investigate. She is not happy.

Toni’s cultural and family ties limit those she can speak to and what she is permitted to know. She isn’t confident in her cultural knowledge and doesn’t always trust what she is told. Her white ex-boyfriend is sent to assist. That’s another complication she could do without.

You recognise the red earth of Perdar Theendar as Central Australia. It was filmed in the Amoonguna Community and around Alice Springs, using the Arrernte culture and language.

This series does not shy away from the complexity of the issues in a remote community. The creators were Warren H. Williams (who also did the music and stars as a local cop and Toni’s maternal uncle) and Erica Glynn. It was directed by Erica Glynn and Steven McGregor.

The creative team has runs on the board with Redfern Now, The Gods of Wheat Street, 8 MMM Aboriginal Radio, Little J and Big Cuz. They integrate aspects particular to the Northern Territory into a compelling story.

In the first episode, we see the effect of the Intervention’s discriminatory restrictions on obtaining alcohol. Toni’s reaction to that leads to her allocation to the case and to you, as the viewer, not trusting her judgment. She seethes with anger throughout the series.

The use and abuse of cultural knowledge is a central theme. The white art dealer may be ripping off the older women. Speaking in language keeps secrets, or protects culture – it depends on your view and could be both.

The ending is interesting – no spoilers – but is it justice?