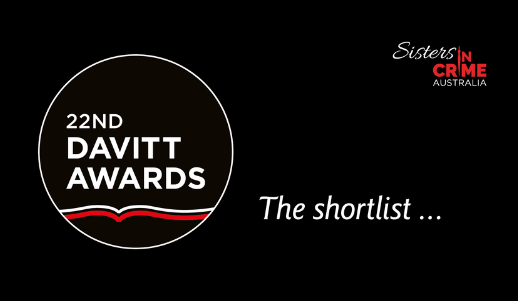 Sisters in Crime has announced its shortlist for its 22nd Davitt Awards for the best crime and mystery books: 11 adult novels, four YA adult novels, three children’s novels, four non-fiction books, and 11 debut novels (most of which are nominated in other categories).

What the judges say:

Judges’ coordinator, Dr Philomena Horsley, said 33 books on the shortlist wasn’t all that excessive given that 169 books had been in contention.

“The Davitt Awards are riding the crest of an enormous wave of popularity for crime writing by Australian women. Women like writing it, the publishers like printing it, and we all love reading it,” she said.

“The quality of the prose and the diversity of the themes and scenes of the crime are on an upwards spiral. The six judges have especially been blown away by the standard of the debut books. The authors demonstrate an impressive expertise in their craft. The calibre of the shortlist reflects the leap taken by crime writing generally in Australia.”

Two of the shortlisted debut novels are self-published: The Waterhole by Lily Malone, and Crime Writer by Dime Sheppard.

“These books, along with the volume of self-published books submitted for judging, reveal a determination by many women writers and readers to share their love of crime,” Dr Horsley said.

“In Charlotte McConaghy’s Once There Were Wolves the driving force is the relationship between the protagonist and wolves. In Sarah Barrie’s, Unforgiven, B.M. Carroll’s You Had It Coming, and Debra Oswald’s The Family Doctor, justice is meted out, not by the law, but by members of the community. Loraine Peck’s, The Second Son, tells the story of a Sydney crime family from a woman’s perspective and cries out to be adapted for the screen,” she said.

“The Silent Listener by Lyn Yeowart and Bodies of Light, the novel by 2022 Miles Franklin winner Jennifer Down, feature explorations of the devastating lifetime impact of the trauma inflicted on some children by their families and by state institutions such as foster families, group homes and resi units.”

Dr Horsley said that the judges were also impressed by the Young Adult novels.

“The Gaps, by Leanne Hall, is not so much focussed on the crime but the impact of ‘not knowing’ on young women. Sugar Town Queens by Malla Nunn takes on issues of corruption, class, and race in Mandela’s freed South Africa whilst celebrating friendship,” she said.

The shortlisted children’s novels feature a fabulous range of locations, according to Dr Horsley, from London (Laura Sieveking, Ella at Eden: The London Thief (Ella at Eden #6), 1874 Eastern Australia (Jackie French, Night Ride into Danger) and the RMS Aquitania on a voyage to New York (Nicki Greenberg, The Detective’s Guide to Ocean Travel).

“The Winter Road: A story of legacy, land, and a killing at Croppa Creek by Kate Holden uses a single, brutal murder to explore Western beliefs about ‘ownership’ and use. Other books challenge concepts about women’s empowerment, and take the readers into the mysteries of unsolved crimes,” she said.

About the Davitt Awards

The awards are handsome wooden trophies featuring the front cover of the winning novel under perspex. No prize money is attached. Self-published books are eligible. Books co-authored or edited by men are not.

The shortlist is attached here.