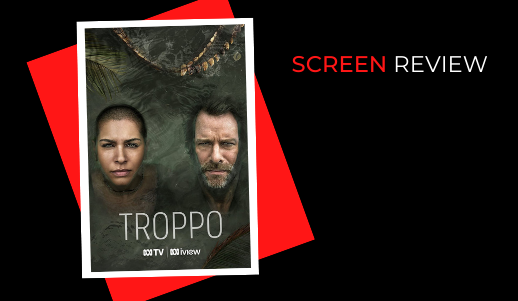 This series has stayed with me. The reason is Amanda Pharrell. The series is based on the book Crimson Lake by Sydney Sisters in Crime member, Candice Fox. Fox created a character in Amanda who is difficult to like and more difficult to understand. Nicole Chamoun plays her to perfection. She is compelling from her first appearance.

My initial feeling was one of curiosity, trying to work out what was going on. The story has some wonderful twists and turns, nothing is what you expect. Fox treats her characters brutally and they suffer the consequences. That raises the tension but not necessarily the engagement. Ted Conkaffey, Amanda’s partner in her amateurish private investigation business, was treated very unfairly. That was upsetting to my sense of justice but nothing more. For Amanda, it was a different experience. It was visceral. By the end of the series, I was raging, storming around the house, fuming at the rottenness of the treatment of Amanda. I’m not saying why – no spoilers.

My resistance to Ted may have been due to his American accent. His story is that he was an Australian policeman. It’s a longbow. My first response was to cringe – do we really need an American to get a show up and running? After the initial anti-American bias, he won me over.

Australians are harder on homegrown product than they are on dramas from anywhere else in the world. We look out for anomalies. When a series is set overseas, we accept what we’re served up. Place a series in Australia and we’ll itch to find a fault. We think the accents are laid on too thick, the setting is twee or we’re not really like that.

Troppo is set in far north Queensland. You can feel the heat and humidity. The cliches are there: crocodiles, snake husbandry, and escapees from normal (southern) life. But there is more to it. There are scientists and foreign tech innovators. Each of the characters is well-rounded and well-cast. They felt like real people rather than the background.\None more so than Amanda. I will never forget her racing around on her pushie. I want more of her. I want to know how she’s going, is she all right? I think she’d hit me if I offered a hug.