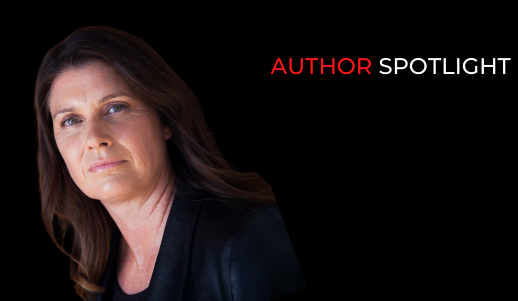 Newcastle author Kelli Hawkins drew some of her inspiration for her second novel, All She Wants (Harper Collins Australia), from her work for a firm of private investigators. She discusses that and much much more with Georgie Baron-Ross.

Hello Kelli, firstly congratulations on your successful career as a writer for adults, children, and private investigators. I’d like to shine a light on your 2022 book – All She Wants, which introduces us to siblings Jack and Natalie, and Lindsay the sweet primary school teacher who is desperate for a child and family. Following a breakup Lindsay meets Jack; she thinks her future is rosy, but as the story unfolds, a string of secrets is revealed…

I saw the job advertised online and I just had to apply. That was six years ago and I still write a couple of reports a week. Before that, I’d been a journalist, blogger, grant writer, and copywriter as well as a graphic designer among other things, but as an aspiring novelist I couldn’t pass up the opportunity to work for a private investigator. I find people endlessly fascinating, so there’s something about surveillance that really appealed to the frustrated detective in me! But as the work I do is for insurance cases, it’s far less salubrious than it sounds. It’s still interesting though!

I really enjoyed the timeliness in the story. How did you map out the story across the timelines and how do you keep track of the goings-on?

I found the timelines quite challenging to get right. The novel is from the point of view of two characters set in the current day. And the ‘Before’ chapters needed to keep the current day plot moving forward, while not giving away too much at the same time. It was difficult, but I enjoyed the challenge and the change from my first book, which was largely written in first person. My desk was covered in piles of loose pages with scribbles on them! The worst thing about working with different timelines and points of view is that one small change can have a cascading effect, and suddenly you need to go through the manuscript with a fine-tooth comb. It was certainly one of those times when coming back later to edit was extremely important. Also having other sets of eyes on it helped. Where would we be without editors?

Was the story inspired by any of your previous cases with private investigations?

No. I was inspired by lots of other things, but not a particular case. Most of the reports I write aren’t about anything as interesting as what happens in the book! Though knowing what surveillance is like helped me with Natalie’s personality and the back story.

What are you working on now and what can we, the fans, expect next?

I’m working on my third book for adults (as yet untitled). It’s a thriller as well, this time set in Sydney and with a younger protagonist (mid-twenties). It’s just as challenging writing book three as it is your debut novel, or so I’ve found!

I have also just finished editing my second book for kids, called Birdbrain, which will be out in September this year, and I’m in the planning stages for my third kids’ book as well.

Who is in your writing community – are there people who have helped you grow your concept to the published work?

Wow, there are so many. My agent, Melanie Ostell, is my first reader and a great help at knocking my manuscript into shape. Obviously, there are numerous people at HarperCollins Australia who help get my manuscript to a higher standard, from my publisher Anna Valdinger to various editors and proofreaders.

And the other writing community I have is online. Bloggers, Bookstagrammers, booksellers, other authors, podcast interviewers – it is amazing how many of those people have become virtual friends, sometimes even real-life friends. The book community in Australia is close and a lovely group of people.

What has been one of the surprising things you’ve learned about yourself when writing this book?

I’ve pushed myself with this book. I’ve learned to keep going and get the words down, even when I feel under the pump, knowing I can always come back and edit later. And I’ve learned that research can be a rabbit hole! I spent days reading about witness protection in the UK, first-hand accounts of it, legislation, and how it works. It was fascinating though.

What’s one piece of advice would you offer to current writers trying to finalise a debut book and get published?

I would encourage them to keep going. It’s very easy to give up when life – family, a day job, and a host of other commitments – get in the way. Particularly when writing is such an isolating thing to do. You never really know whether what you are writing is good enough. And I guess the other thing is to try to gather that writing community around you. Join a writing group, do a course, show other writers your work. You need to get feedback, you need to edit and improve your manuscript until it’s the best it can be. And then send it out into the world – and put on your thickest skin! Be prepared for rejection but stay hopeful. It will happen!