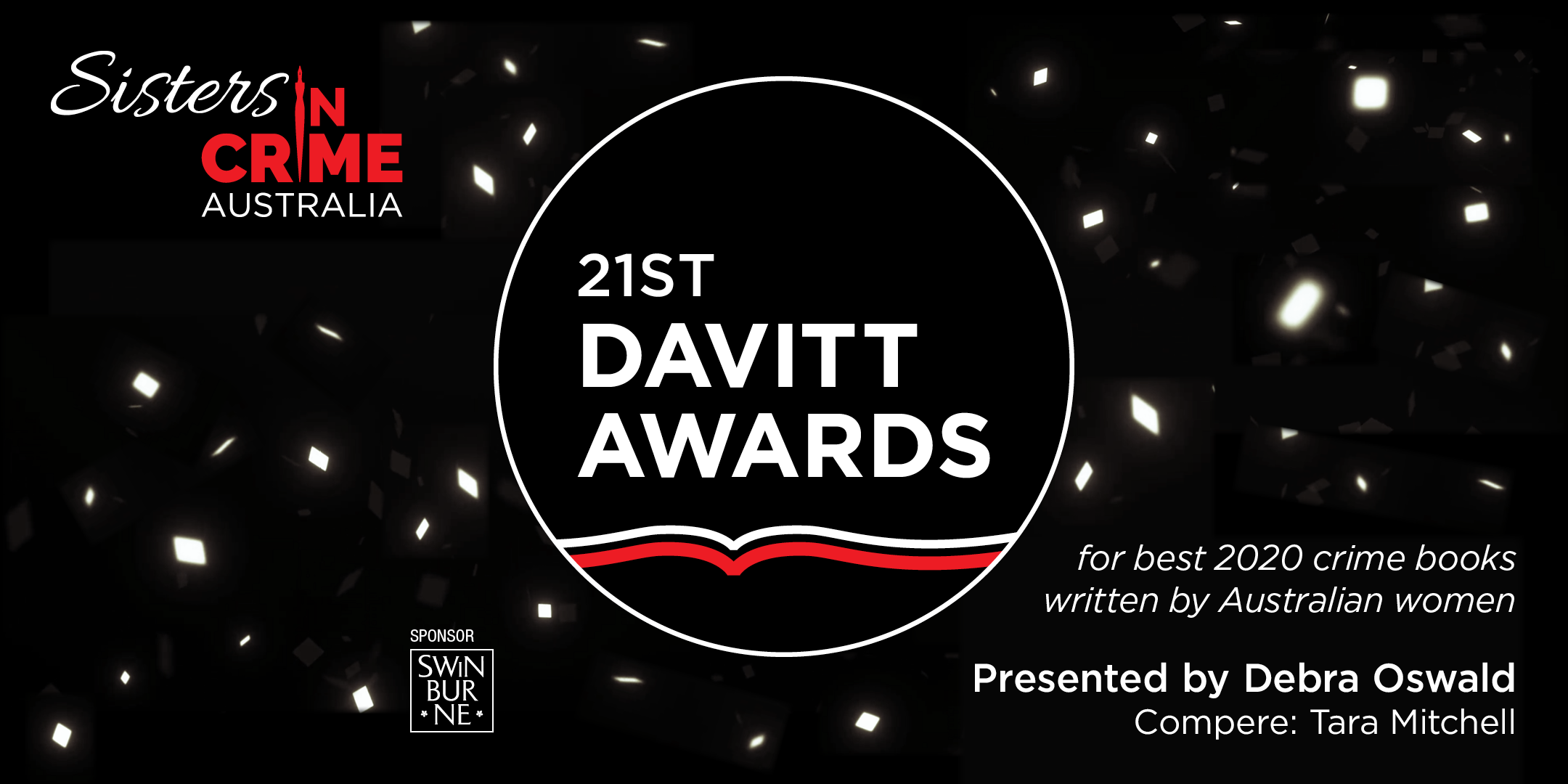 Hepworth, based in Melbourne, is the New York Times bestselling author of six novels. Her 2019 book, Mother in Law, has been optioned for a TV series by Hollywood actress and producer, Amy Poehler.

“If I’m perfectly honest,” she said, “it’s still a surprise to me that I write crime. I always start out with a happy, uplifting premise, and before I know it, I’m Googling the best instruments with which to bludgeon someone to death. I blame my teenage fixation with Law and Order SVU. That said, I like to think that there is a market for happy uplifting books that include a little bludgeoning – I may be wrong, but this is my line and I’m sticking to it.”

The Davitt Awards were presented by Debra Oswald, the award-winning playwright, screenwriter, and novelist, and hosted by Tara Mitchell, Sisters in Crime’s Vice-President. Before presenting the awards, Oswald was quizzed on her brilliant career and her latest book, The Family Doctor, an explosive novel about domestic violence.

“Last year our plans for a big gala dinner for our 20th anniversary were scuppered by the pandemic and this year it’s been the same,” Mitchell said.

“The one silver lining is that thanks to the miracles of modern technology, the Davitts now reach a global audience. Our lists now include crime fans from New Zealand, Singapore, Indonesia, South Africa, Canada, the USA, the UK, France, Germany, Switzerland, Italy, and Russia.”

Altogether, 127 books were in contention.

The other Davitt awards were presented to:

Christie Nieman for her debut crime book, Where We Begin (Pan Macmillan Australia) for the Best Young Adult Crime Novel. Nieman said: “I have been plugging away at this career now for twenty years and my writing has been longlisted and shortlisted for various things, and this book itself has been shortlisted for two Premiers Lit Awards and the CBCA, but this is the first thing I have ever actually won. And for my first win to be awarded to me by a bunch of incredible women whose interest is lifting women’s writing, and to pay attention to women writing the darkness of the world into the open when so much crime is men’s crime, who wish to elevate women’s voices in this area… well, for myself to be lifted and recognised by Sisters in Crime – how absolutely bloody wonderful. And to get a trophy too. Oh, my giddy heart. Thank you.”

Lian Tanner for her debut crime book, A Clue for Clara (Allen & Unwin Children’s), for Best Children’s Crime Novel. The hero is a scruffy chook who dreams of being a famous detective with a TV show and teams up with the daughter of the local policeman to solve crimes in the town of Little Dismal. Tanner said: “A huge thank you to the judges for picking my little chook out of the shortlist and turning her into a prize winner. I love crime novels and mysteries, and have been reading them all my life, but this is the first one I set out to write – and, for that, I owe an enormous debt of gratitude to my late chooks, Dolly, Floss, and Clara, who were the inspiration for this book, as well as its primary research subjects.”

Sue Whiting,  who was highly commended for The Book of Chance (Walker Books Australia) in the Best Children’s Crime Novel.  Whiting said: “The Book of Chance was inspired by a true crime that took place in 1998 but wasn’t solved until 2017. As the story unfolded in the world media, I started to wonder about how the young victim at the centre of the crime would cope with the realisation that her whole life had been a lie. And it was this wonderment that led me to creating the character of Chance Callahan and the novel The Book of Chance.”

Louise Milligan for Witness: An investigation into the brutal cost of seeking justice (Hachette Australia) for Best Non-Fiction Book. Milligan, an award-winning ABC Corners journalist, is also the author of Cardinal, The Rise and Fall of George Pell. Her work in Cardinal led to Louise being a witness in his committal proceedings, which she found “unnecessarily brutal… So, it’s wonderful for me to get recognition like this for Witness, because I want as many people as possible to read the book – lawyers, judges, policymakers, ordinary members of the public – and to think about how we can make the system less traumatic for people who summon the enormous courage to come forward and tell their story.”

Leah Swann for her debut crime novel, Sheerwater (4th Estate, an imprint of HarperCollins Publishers Australia) for Best Debut Book. Swann said: “I embarked on writing Sheerwater with excitement – and some trepidation. It opens with a woman who stops to help at an accident and gets back to her car to find her children have gone missing. The story took me to some frightening places, and there were many times I was convinced it would never come together! Awards like the Davitts, which support the work of women, are a vital source of encouragement – a signal that yes, you’ve made something that can take readers into another world. Right now, we need these worlds more than ever, as inspiration, as provocation, as adventure, as comfort, as the release of strong emotion, and finally, as a kind of freedom.”

Katherine Kovacic for The Shifting Landscape (Alex Clayton #3) (Echo Publishing, for the Readers’ Choice Award, as judged by the 500+ members of Sisters in Crime. The Shifting Landscape is the third novel in her series featuring the art dealer, Alex Clayton. This time the action takes place in the Western District. Kovacic said: “Winning the Reader’s Choice Award is a special thrill, because it’s the readers who make it worthwhile. To know that people embrace your stories and characters is so incredibly heartening given that writing can be such a solitary pursuit. Thank you so much to everyone who voted for The Shifting Landscape. It was such an incredible lineup of books to choose from this year, which just makes this even more special. In my (many) moments of self-doubt, it’s going to keep me writing.”

The 2021 Davitt Awards were again supported by the Swinburne University of Technology.

The Davitt Awards ceremony can be viewed on Sisters in Crime’s YouTube channel.