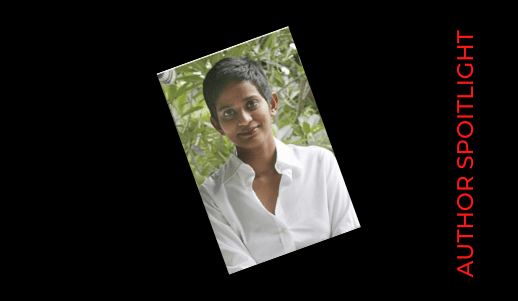 Singapore-based author, Shamini Flint, talks to Robyn Walton about her latest book, The Beijing Conspiracy (Allen & Unwin), which marks a radical departure from her Inspector Singh series. Politics sparked her new venture. Shamini was one of the international guests at SheKilda#2, Sisters in Crime’s 20th anniversary convention, and she also presented the Davitts that year. She had us rolling in the aisles.

Many crime fiction readers will already know and love your Inspector Singh series, and some may know your writing for children/YA. Can you tell us about your careers as an author and lawyer and how you came to write your international thriller, The Beijing Conspiracy (first published in 2019 and released in 2021 as a paperback)?

The Beijing Conspiracy was a venture well outside my comfort zone in many ways and yet perhaps also a natural destination in my writing career. Looking back, it seems the most powerful spark for me has always been politics, whether tiny and domestic or on a grander scale.  I was cross when there were no children’s picture books reflecting the lived experiences of Asian kids, so I embarked on the Sasha picture book series that began my writing career. The injustices that are insufficiently discussed and debated within Asian countries, whether it is the laws against homosexuality in Singapore or the complex court systems in Malaysia, triggered the Inspector Singh series.

Most of these issues are inherently political. Unfortunately, the planet is becoming ‘smaller’ and there the problems facing society are no longer isolated, whether we are discussing the climate crisis or the Trumpian fiasco. I also felt that the burgeoning tensions between a more assertive China and a US determined to maintain its hegemony is not dissimilar to the old Cold War dynamics of the previous era. So, I thought I would write an old-school thriller but featuring this modern-day antagonism

There’s a famous filmed sequence from June 1989 in Tiananmen Square, Beijing: a lone civilian walking to stand in front of a cavalcade of tanks. Why did you describe this in the prologue to your novel?

Tiananmen Square in Beijing was the location of the crackdown on student activists and reformists in 1989. Much of the events of that day are shrouded in mystery and the Chinese government has been indulging in a multi-decade exercise in propaganda to obfuscate the truth. However, that lone act of rebellion, and the subsequent disappearance of the Tank Man, is part of the global consciousness now (thanks to the film being smuggled out in a journalist’s sock). Aside from my deep admiration for that man and the desire to pay homage to his courage, I also find when writing topics that are not completely familiar to readers it is good to root the story in the familiar as an entry point to trigger engagement, hence my using that description but also weaving his mysterious disappearance into the book.

Thirty years after 1989 your protagonist, Jack Ford, is prompted to fly from the US to Beijing via Singapore. What’s motivating Jack? And, considering you live in Singapore, might it be the case that you wanted to sneak a bit of your city into what is chiefly a Beijing-Washington story?

It was a shameless moment of writing in my comfort zone! I needed an incident to occur outside China to trigger various events within and outside. My first thought was to place the scene in China but then I thought, why not down the street? I found it amusing that the last time the Singapore Botanic Gardens featured in one of my books it was in Sasha Visits the Botanic Gardens for ages 3-5. This time, the body count is higher!

Am I right in thinking your Washington leaders bear a passing resemblance to President Trump and his people? And what about your Chinese leadership contenders: was Xi Jinping an influence on your characterisations?

I am pleased to say I enjoyed tearing into the orange moron – although he is not expressly named because the publisher felt it would shorten the shelf life of the book. Mind you, he is unmistakeable. I named the VP, who is a woman of some principle, after Kamala Harris and Elizabeth Warren, so I also feel smugly prescient at present. As for the Chinese characters, they are more a composite of various leaders – some of the reformist zeal of Xiang Jemin with others representing the various factions, hardliners, reformers, corrupt officials, etc as they exist at the pinnacle of Chinese power.

Readers may hope that Jack’s reunion with his long-ago lover Xia will be romantic, but I can’t promise them it is. How did you decide how to represent this relationship? Was it a plot-driven or character-driven decision?

Hmmm, that is a difficult question because I don’t think I distinguish between plot-driven and character-driven as I write. In a sense, the characters have to act ‘in character’ and a man like Jack Ford is too cynical to try and save the world but is too empathetic to be able to walk away from a personal plea for help or where he feels a personal sense of responsibility. In the circumstances, I knew he would only go to China at the behest of a woman he once loved to save the girl who might be his daughter.

Of course, as for all thriller heroes, the stakes escalate exponentially for him and for us. I don’t like the characterisation of women in the thriller generally, the femme fatale or the loyal, self-sacrificing wife or girlfriend (how awful is the wife in the Jack Ryan movies??) so I was determined to try and create a complex character with her own agenda for my main female protagonist.

I should also say that I am pleased to have joined the cultural appropriation gravy train by writing a white male protagonist!

You’re also a committed environmental activist. What kinds of things do you do?

Personally, I try and adopt a more responsible lifestyle, zero plastic, no beef (hope to be vegetarian soon but still haven’t quite managed it), less travel, support environmental charities, ethical shopping etc. In the public sphere, I advocate for change especially through my children’s books and on school visits. I have a new book, the first in a series of graphic novels featuring a couple of kids trying to save the animals of Borneo, coming out in a couple of weeks.

Honestly though, over the span of my writing life the situation has gotten substantially worse and the right-wing nutters take their cue from the right-wing nutter press, all dedicated to preserving the status quo in the comfortable (flawed) belief that their wealth will insulate them when the waters rise or the country burns. Maybe, this pandemic, a direct result of man’s treatment of nature, and the consequences, a direct result of incompetent management and a lack of global cooperation, will open people’s eyes. But I doubt it. We won’t fix this problem until the Murdoch boil is lanced. In the meantime, thank god for Biden.

Last word to you, Shamini.