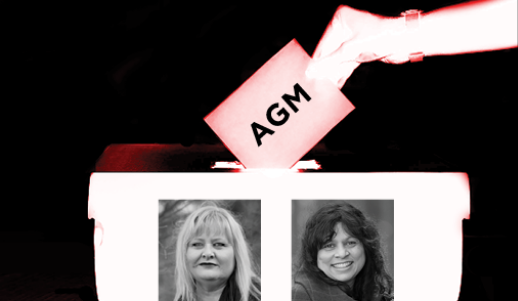 Sisters in Crime Australia held its 2021 Annual General Meeting on Saturday 28 May 2022. It was delayed due to so many lockdowns. Twenty-six members participated online with a further 26 via proxy so the meeting was quorate.

Carmel Shute reported that the pandemic had posed big challenges but Sisters in Crime had managed its way through.

“One of the silver linings of two terrible years of lockdowns has been Zoom which has allowed Sisters in Crime to feature authors from all over Australia and parts beyond. It has enabled us to reach a national and indeed global audience, and to hold AGMs such as this where all members can participate, irrespective of geographical location. Temporarily, at least, we have overcome the tyranny of distance.

“Looking at the numbers from our YouTube channel, it shows we have reached hundreds and in some cases over a thousand viewers, which is amazing compared with the size of our normal face-to-face events.”

The highlight of the meeting was a twenty-minute ‘in conversation’ between Vikki Petraitis and Sulari Gentill about writing, their forthcoming books, and what being involved in Sisters in Crime has meant for them. Check out YouTube in early June.

“It was our first proper live event in more than two years. It was thrilling to meet up in person and eat, drink, sing, talk and laugh. Sue Turnbull, Sisters Ambassador-at-Large, came from Wollongong to host the event – and was, as always, brilliantly attired. Some surmised she had stepped out of Harry Potter,” she said.

“We were chuffed to receive birthday greetings from Sara Paretsky (her V I books have just turned 40 by the way), Kathy Reichs (and her cat Skinny), Shamini Flint, Vanda Symon, Sigrid Thornton, and Cate Kennedy. You can see their videos on our YouTube channel,” she said.

“A video of the ceremony will also be available soon. Seeing Jane Clifton and Chele Cooper lead us all in singing “Sisters Are Writin’ It For Themselves” is worth a watch – and many thanks to short-story guru, Cate Kennedy, for the lyrics.”

She congratulated Sydney member Candice Fox for Troppo, the 8-part series based on her book Crimson Lake, which has just been on ABC TV, and Jane Harper. Production has just started on the film of Jane’s second Aaron Falk novel, Force of Nature. Jane had her very first literary event with Sisters in Crime in Melbourne in June 2016. The event was entitled, “Making a Killing: How to write a best-selling crime book”.

“Were we prescient or what?”, Carmel asked.

“More generally, we have been able to enjoy a busy calendar of events over the past twelve months, despite the pandemic. We’ve had monthly Murder Monday one-on-one author interviews thanks to former convenor, Karina Kilmore. So far, 40 different authors have been interviewed, including leading overseas writers, Sara Paretsky, Kathy Reichs, Val McDermid, Ann Cleeves, Louise Candlish, Sara Vaughan, Vanda Symon, and Tara Moss.

“In Melbourne, monthly events have been Zoomed, as has the occasional event in Sydney. There’s been a lot of fun with everything from ‘How to Get Away with Murder’ and Jacqui Horwood’s interview with the inimitable Lynda La Plante who last spoke to Sisters in Crime in 1997 when she was still riding on the wave created by Prime Suspect. We’re thrilled that Lynda has joined Sisters in Crime Australia.

“The 2021 Davitt Awards and the Scarlet Stiletto Awards were both Zoomed and tarted up with music and graphics thanks to Kathryn Lamont. Both ceremonies were very engaging, featuring the talents of Debra Oswald, Tara Mitchell, Catherine McClements, and Jane Clifton. So far, the Davitts video has attracted 421 views, the Scarlets 320.”

Carmel said that in Queensland, members have gotten together most months, either face-to-face or on Zoom. The South Australian chapter has hosted several events.

“We trust you’ve enjoyed the monthly e-newsletter, A Stab in the Dark, produced by fellow convenor, Sara Hood, and me. Sara and our review editor, Moraig Kisler, now put out a mid-month review edition featuring six book reviews and Siobhan Mullany’s pithy television reviews. Siobhan is a NSW convenor who won the Scarlet Stiletto trophy back in 1997,” she said.

“Sara Hood also had the bright idea of The Crime Stack where 20 members are chosen at random each month to receive a free book donated by publishers. It’s yet another reason to be a member.”

Carmel paid tribute to her fellow convenors and to two convenors who resigned last year: Karina Kilmore, who continues to do an outstanding job in hosting Murder Monday interviews, and other initiatives such as the Bares Bones of True Crime with Port Phillip Library Service, and Tara Mitchell, who did a fantastic job with coordinating events, especially our big events, like the Davitts and the Scarlet Stiletto Awards. She also presented last year’s Davitt Awards.

She also offered big thanks to Caz Brown, a former convenor, who has done such a great job in designing most of our graphics, plus trophy plaques, t-shirts, tote bags, convenors badges, and medallions to go on the shortlisted and winning Davitt books.

“Caz has been made a life member as she served on the national committee for 10 years but, because of the pandemic, we’re still to make a formal presentation. Hopefully, it will happen next month,” said.