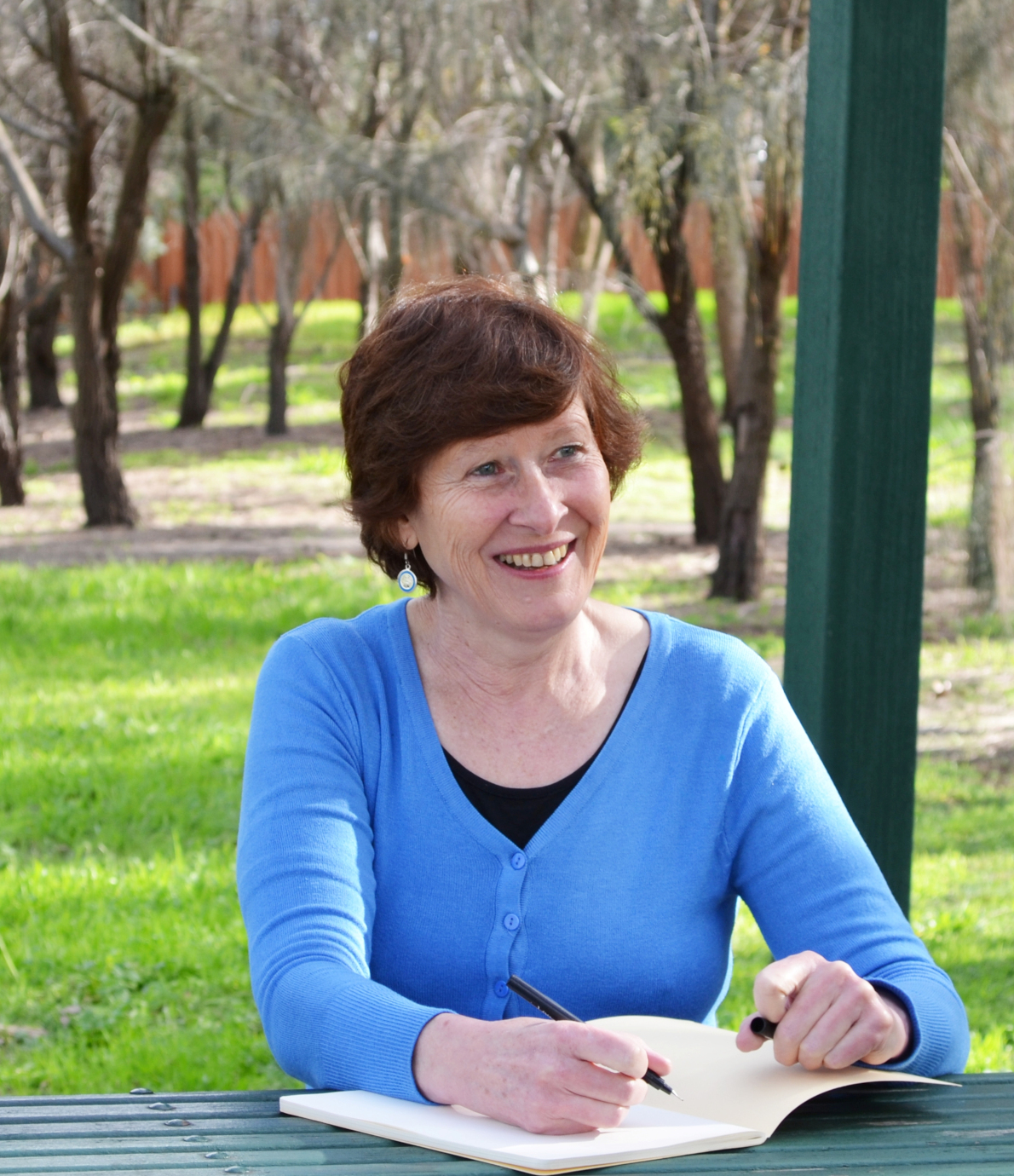 Hello Robin. Is Traffic your first publication? And what led you to choose crime fiction?

Thanks for the opportunity, Robyn.

In relation to the first half of your question, I self-published a thriller called Novice Death more than twenty years ago, but this is the first time I’ve been picked up by a publisher.

In my twenties, crime fiction written by women enticed me. I was working in the area of family violence and the injustices for women infuriated me. Through reading crime fiction, I felt a sense of justice that in reality is rarely delivered by police or courts.

I also loved the gritty reality of crime fiction and strong female characters, like Sara Paretsky’s V. I. Warshawski. My own Private Investigator, Sandi Kent, took form and insisted I write about the crimes she needed to solve.

Your bio tells us you’ve been a social worker in the community health and family violence sectors. Did you plan to tap into that experience for your novel?

My experience working in a women’s refuge, at the start of my social work career, helped me understand the trauma and upheaval of women and children escaping violent situations. Back in the 80s, there was no point involving police, because they dismissed family violence as a ‘private matter’ and blamed the victim, so it was up to us refuge workers to pick up women escaping their violent partners in the work van, support them to recover and start a new hidden life.

We were obsessive about keeping the refuge location secret, even from funding bodies. Some women decided to go back, or were manipulated by their partners into going back and if the refuge address was revealed both residents and workers were at risk.

I used the knowledge about the risks for both women experiencing violence and the workers who assist them in writing Traffic.

I’ve also read that you love travelling in Spanish-speaking countries and learning Spanish. Did any of that make it into Traffic?

When I was in my twenties, I spent six months travelling around Latin America, starting off as a brigadista in a coffee-picking brigade in revolutionary Nicaragua. My interest in the Spanish language, the continent and its struggles was ignited the moment I landed in the tropical and decimated capital Managua.

I introduced some Spanish speaking characters into Traffic, partly so I could include the beauty of the Spanish language in the novel. PI Sandi Kent and I share our interest in Spanish. I’ve been learning for many years with minimal progress, but Sandi is naturally talented and so although she has studied little, she has picked up heaps, spurred on by a previous love interest.

Other beginner authors might be helped by knowing how long it took you to produce a full draft of your novel and what stages or phases you went through to get that far.

As I’m sure other authors will attest to, getting published is a long process. I’ve learnt that perseverance and patience are two essential qualities for an author.

The process of writing my first draft of Traffic took six years. I began by researching sex trafficking, and developing relevant characters before starting to write.

Three years later, I was at the pointy end of the first draft when I attended the Brisbane Writers Festival. As I listened to a Nordic noir author, I realised, with a grenade in my gut, that I’d approached writing the novel the wrong way. I’d been letting the characters dictate the plot. I know this works for some writers, but it wasn’t working for me.

I returned home to my laptop, opened an Excel spreadsheet and planned the purpose of each chapter, the clues that would be revealed, the weather, mood, character development etc. Once I’d achieved that task, the novel flowed. The only problem was when the characters chose to rebel against my detailed plan. They always won over the spreadsheet.

And what else happened before you had a finished book in your hands? I’m thinking: securing a publisher, dealing with editors, checking information, etc.

The next stage of my journey was to find a publisher. I attended a useful session at the Victorian Writer’s Centre about how to pitch to a publisher. Once I’d stripped back the content of the novel to one sentence, I sent the manuscript off to several publishers who accepted unsolicited manuscripts. I heard nothing back.

I was searching for other options, when Sisters in Crime held a conference in St Kilda Town Hall. The program included a pitch to publisher session. Despite the fact that as an introvert the idea made me quake, I signed up.

I thought I’d be speaking to one publisher at a time, but as it was, I presented to three publishers together. Part of the challenge was that I’d developed a particular focus for each publisher. I’d read on the Clan Destine Press website that they loved fictional animals and Sandi Kent lives with a tortoiseshell cat, Flicker, so she had to be part of my spiel. Faced with three publishers at once, I had to make a quick call about whether to include Flicker. Flicker featured and Lindy Cameron from Clan Destine Press asked me to send her the first three chapters of the manuscript. A few months later we met to discuss a contract.

The process of working with editors from the publishing company involved several years of reworking, polishing, checking and proofreading. Finally, it got to the exciting stage of developing a blurb and reviewing the proposed cover.

When I met Lindy Cameron to celebrate and pick up a box of paperbacks of Traffic outside the Sun Theatre in Yarraville – coincidentally a setting in Traffic – black clouds swooped across blue sky and waterfalls of rain threatened to drench our precious cargo. It seemed a perfect climax for the publication of a crime novel. 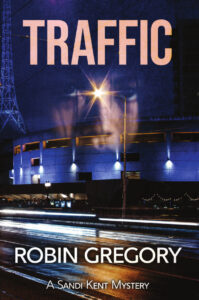 Your book’s cover image of St Kilda Road at night alongside Melbourne’s Arts Precinct suggests a CBD or inner-city storyline with vehicles and people on the move. Am I on the right track?

You’re right Robyn. Like the title of the novel Traffic, the cover image highlights the movement of people, especially those involved in trafficking women around the inner-city. The indistinct pedestrians on the back of the novel suggest hidden aspects of Melbourne, sometimes in full view but yet invisible to the casual passer-by.

Scattered through your text are snippets of information about your protagonist’s personal appearance, physical activity level, car, home. Can you say a little about how you visualise her and who might act her part in a screen version?

Sandi is fiery, strong and brave, sometimes recklessly so. She’s a tall, solidly built woman, with an olive complexion, spiky bleached hair, green eyes, and a brilliant smile. While not traditionally beautiful, she has a soft, rectangular face.

In terms of who could act in her role, Alia Shawkat from Arrested Development is a definite candidate as a strong, outspoken and passionate woman.

Your plot brings Sandi into unsettling contact with an ex-girlfriend or two. Did you want to say anything about the fact that Sandi is a lesbian? What do you think about the label ‘lesbian crime fiction’?

I was in my early twenties, when I came out as a lesbian and discovered there was a distinct lack of lesbian characters in novels or on the screen. The ones that did exist either died tragic deaths or were forced back into heterosexual relationships. Thankfully, that’s changed, but I believe you can never have enough lesbian and gay characters represented in all their complexity, not only for our community but for everyone. These days, I think there is a desire from the wider community to have a diversity of characters reflected in novels.

While I quite like the idea of ‘lesbian crime fiction’, I think there is a risk it might narrow this genre to a particular audience, and that would be a shame.

Your cover tells us Traffic is “A Sandi Kent Mystery”. You’re working on a sequel or series?

Sandi Kent has been around for twenty years – she featured in a story of mine that was shortlisted in Sisters in Crime’s Scarlet Stiletto Awards – and remarkably hasn’t aged. She continues to be a vibrant presence in my mind and on the page, and I am now working on a sequel Sandi Kent Mystery and have a number of future plots bubbling.

Last word to you, Robin. Anything more you’d like us to know?