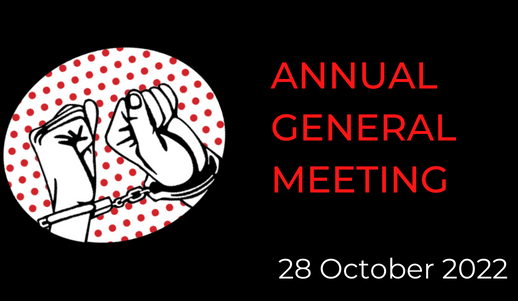 Sisters in Crime Australia held its 2022 Annual General Meeting on Friday 28 October 2022, following its Felony and Fun event at South Melbourne’s Rising Sun Hotel. It had convened a delayed 2021 AGM on Zoom only five months earlier, on 28 May, but needed to get back in sync with the schedule required by Consumer Affairs Victoria.

Sisters in Crime President, Moraig Kisler, declared the meeting quorate as there were 25 in attendance and 47 members had sent proxies.

Carmel Shute reported that Sisters in Crime now has a record 583 paid-up members.

“With supporters, our mailing list for our monthly newsletter, A Stab in the Dark, is now a record 4002.

A new chapter was launched in Tasmania a few weeks ago with LJM Owen, the director of Terror Australis, the convenor. As LJ reported: “On Thursday 6 October, we gathered a few bad apples from around the state and country –as well as some ring-ins from New Zealand – to celebrate the new Tasmanian Chapter of Sisters in Crime Australia at Frank’s Ciderhouse in the Huon Valley. We were incredibly pleased to welcome Dr Angela Savage, CEO of Public Libraries Victoria, and Lindy Cameron, vice-President of Sisters in Crime Australia, to officially launch the new chapter.” (To see her full report, go here.)

Carmel said that it was wonderful that Sisters in Crime could finally meet in person all around Australia.

“In July, Victorian members met back here at the Rising Sun for the first time in two and a half years. In August, over 80 crime authors and fans turned up here for the Davitt Awards. It was a brilliant night – a wonderful ‘in conversation’ with ABC broadcaster and true crime author, Louise Milligan, conducted by Jacqui Horwood – and so much joyous networking between the authors and between the authors and their many fans. We were impressed that so many authors travelled from interstate even though they knew they hadn’t won a prize. This place just buzzed,” she said.

“The same weekend crime fans descended on a Sisters in Crime Festival in Cobargo, organised by the very energetic Melissa Pouliot, a Merimbula crime writer. Two of the featured authors are here tonight – Vikki Petraitis, and Caroline de Costa. Please give them a clap!

“Over the past few months, we’ve also hosted four Sisters in Crime in the Library events – two in Bayside and two in the City of Port Phillip. We hope these partnerships will continue into the future.”

Carmel reported that the monthly Murder Monday one-on-one author interviews are in abeyance following the withdrawal of Karina Kilmore who had undertaken an amazing 43 interviews since 2020, including a number with leading overseas writers, Sara Paretsky, Kathy Reichs, Val McDermid, Ann Cleeves, Louise Candlish, Sara Vaughan, Vanda Symon, and Tara Moss. I did two myself though I am yet to get the courage to watch them. Any ideas of how we should proceed in the future would be appreciated, so long as it doesn’t involve me.”

There have been other developments, Carmel said:

Carmel reported that Sara Hood also had the bright idea of the Crime Stack where 20 members are chosen at random each month to receive a free book donated by publishers.

“In September Allen & Unwin went one further and donated 5 copies of 7 different crime novels. Not surprisingly, the Crime Stack has proved a winner with members,” she said.

Carmel paid tribute to the amazing efforts of the National Convenors and also offered big thanks to Caz Brown, a former convenor, who does such a great job in designing most of the graphics, plus trophy plaques, t-shirts, tote bags, convenors badges, and medallions to go on the shortlisted and winning Davitt books – and lots more.

Treasurer Lesley Gillis reported that for the period 1 July 2021 to 30 June 2022 reflect there was an operating income of $50,080 and an operating expenditure of $54,176 giving us an operating loss of $3,880. “Overall, I believe the funds of Sisters in Crime are in a reasonable shape to proceed into the forthcoming financial year,” she said. For further details, see the Treasurer’s Report, SinC Profit & Loss [Accrual] 2022 06 30, and SinC Standard Balance Sheet 2022 06 30.