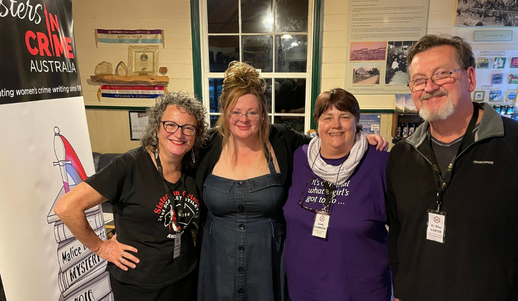 On Thursday 6 October 2022, we gathered a few bad apples from around the state and country – as well as some ring-ins from New Zealand – to celebrate the new Tasmanian Chapter of Sisters in Crime Australia at Frank’s Ciderhouse in the Huon Valley.

We were incredibly pleased to welcome Dr Angela Savage, CEO of Public Libraries Victoria, and Lindy Cameron, Vice-President of Sisters in Crime Australia, to officially launch the new chapter.

In 1830, the first novel published in Australia was released in Hobart – Henry Savery’s Quintus Servinton, a crime novel. It’s marvellous to realise that the Australian publishing industry began almost 200 years ago with Tasmanian crime fiction.

Then, by the time Agatha Christie visited us in 1922, Australians around the country were reading crime and mystery fiction written by the Tasmanian-born Hilda Bridges. In October that year, exactly a century ago, Hilda published the Tasmanian-set serialised novel The Indian Desk.

Of her 1922 travels, the Queen of Crime wrote: “Incredibly beautiful Hobart, with its deep blue sea and harbour, and its flowers, trees, and shrubs. I planned to come back and live there one day.”

The world’s most celebrated crime fiction author may not have returned to Tasmania’s dark and glorious shores, but she and Hilda did inspire generations of writers to follow her in her footsteps.

To celebrate the centenary of Agatha’s visit, earlier this year I set about creating an exhibition of Tasmanian crime and mystery fiction, Tasmania: A Century of Mystery.

In doing so I discovered more than 100 novels of crime and mystery fiction written by Tasmanians, or set in Tasmania, published in the past century. At least half of these works were written by women.

So to me, as the convenor of Tasmania’s new chapter of Sisters in Crime, Em Cutting and I aren’t forging a new path. We’re continuing a century-old tradition of Tasmanian women writing crime and mystery fiction and non-fiction that is enjoyed by readers right around the country.

The launch at Frank’s was a criminally good way to begin the Tasmanian heist, and we look forward to welcoming many more women crime writers to the barrel.