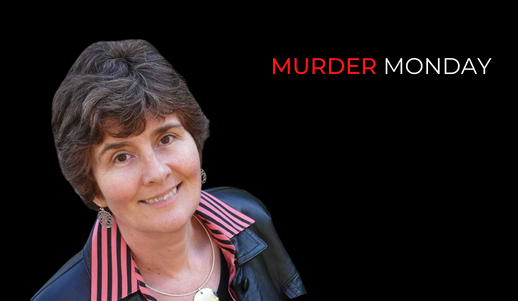 Sue Williams has an unusual background for a crime writer. She has a PhD in marine biology and has worked as a science writer and chartered accountant. Her four novels are set in the tiny town of Rusty Bore in the Mallee. Sue grew up in the country and the Rusty Bore cafe might sell fish and chips but it’s a hell of a long way from the sea … She talked about her career and her crime craft with author Karina Kilmore for June’s Murder Monday.

Sue first spoke to Sisters in Crime in Melbourne back in 2013 when her first crime novel to feature Cass Tuplin, owner of the Rusty Bore Takeaway, was just out. It had the wonderful title of Murder with the Lot. Kerry Greenwood called it “a well-sauced outback caper, with Chiko Rolls – and murder”.

That was followed by Dead Men Don’t Order Flake, which might just win the prize for the best Australian crime novel title ever, Live and Let Fry, and now Death at the Belvedere (just out with Text Publishing).

Over that time, the population of Rusty Bore has remained steady at 147 and Cass Tuplin has remained an unlicensed investigator. Under pressure from her very annoying policeman son, Dean, she has more or less agreed to abandon sleuthing but, of course, circumstances conspire against that promise.

Cass is pretty much an accidental detective – mysteries just come knocking at her door in Rusty Bore while she is relentlessly cleaning every speck of oil and grime from her takeaway counter. She is a sleuth with a difference, to say the least.