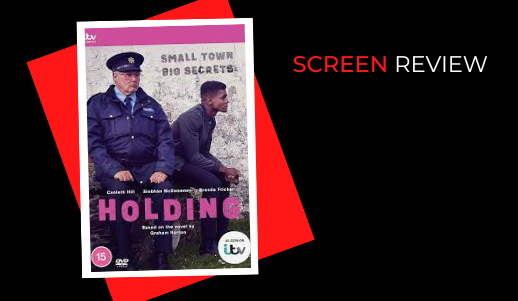 If your life is getting back to normal and you only have time for a short series, I recommend Holding. Intelligent, compassionate, and funny.

Holding is a who’s who of writers and actors. The director is Kathy Bourke, the English actress, comedian, writer and producer, and director. You know her on-screen from French and Saunders and she was Magda in Ab Fab. She won Best Actress in the Cannes Film Festival for Nil by Mouth.

Based on a novel by Graham Norton, the script is written by Dominic Travedwell-Collins (started in Midsummer Murders) and Karen Cogan (Young Offenders). Graham Norton and Karen Cogan are from Cork and know their county well. It is said that County Waterford is the Dubbo of Ireland, County Cork is west of that and West Cork is another step back into the country again.

PJ Collins, the local policeman, is called in when builders find a body. Identifying the body highlights the complex connections between the women in the village. Everyone’s history is dragged through the mud – it’s Irish farming country and so there is plenty of it – both real and metaphorical.

PJ Collins, played by Conleth Hill, has an eating disorder from some unnamed trauma. The nod to Cold Comfort Farm doesn’t end there, Brid O’Riodan’s mother definitely saw something nasty in the woodshed.

The cast is a checklist of those you have enjoyed on screen for years. Brid O’Roidan is played by Siobhan McSweeney (head nun in Derry Girls). PJ Collin’s housekeeper is Brenda Fricker (the mother in My Left Foot and in our own TV series Brides of Christ). Pauline McLynn is the local know-it-all (the housekeeper in Father Ted, and her voice is the same). Conleth Hill looks very different from Lord Varys in Game of Thrones (he is also on iView right now as Dr Thomas in Why Didn’t They Ask Evans).

Too many to mention them all, you could base a whole game of Trivial Pursuit by naming who was in what before they were in Holding.

Holding made me smile while watching it and I’m still smiling thinking about it.