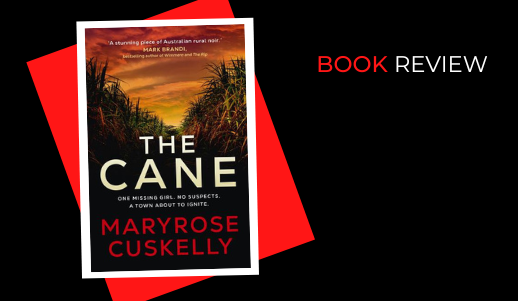 A TOWN ABOUT TO IGNITE.

Barbara McClymont walks the cane fields searching for Janet, her sixteen-year-old daughter, who has been missing for weeks. The police have no leads. The people of Quala are divided by dread and distrust. But the sugar crush is underway and the cane must be burned.

Meanwhile, children dream of a malevolent presence, a schoolteacher yearns to escape, and history keeps returning to remind Quala that the past is always present.

As the smoke rises and tensions come to a head, the dark heart of Quala will be revealed, affecting the lives of all those who dwell beyond the cane.

Not in The Cane.

In this magnificent debut novel, Maryrose Cuskelly has turned that structure on its head. This is the story of a community in which a terrible thing has already happened. It’s about how a terrible crime, or more accurately the fear of a terrible crime, affects the individuals and their relationships. Yes, there is a detective and yes our detective pursues clues and sleuths in good order, often against the odds and those odds are often man-made, but that’s not the central focus.

The Cane is a close observation of a community that is under stress due to the impact of the missing girl. And it’s mesmerisingly good. Those who knew Queensland in the Seventies and know the Queensland cane fields say it’s utterly accurate. For me, I enjoyed the window into that world, but it was the observation of the characters and their reactions that I found so compelling. And to think this book is a debut!

Many things had me madly turning pages, but two in particular. It’s no spoiler to say that the crime is a missing young teen. She’s been gone for some time. You find this out in the first page, which is a gut wrenching observation of her mother in utter anguish outside the local shop. If that doesn’t suck you in then you have a heart of stone. The other story strand that kept grabbing my heart was the two teen girls and their friendship, and how one of the teen girls is tottering on the edge of disaster, and whether her friend (who is a tad smarter) will get sucked in too. Oh my. You just want to jump into the book and grab them by their ears and pull them back from the edge.

Do you find out who, why and how the crime was all done? Yes. And that’s a fine ending, but it’s not portrayed as the triumphant success that it is in more traditional crime books where the cops all go to the pub to celebrate. Someone still died. There’s no going back from that. This community has been changed by the crime and will never be the same again. I felt that the importance of that is respected. You know that there is no end to this for them. Life goes on and it will be same, same, but irrevocably different.