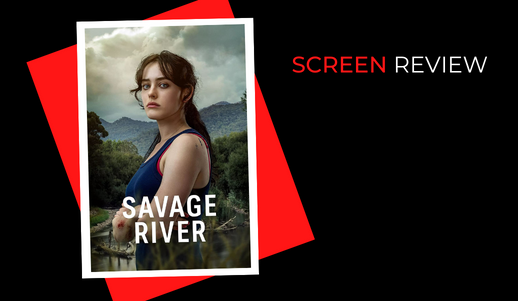 Australian film royalty is involved in this series. The director is Jocelyn Moorhouse (Proof, How to Make an American Quilt, The Dressmaker). The cinematographer is Don McAlpine whose long history began with The Adventures of Barry McKenzie, continued with Australian classics such as The Getting of Wisdom and My Brilliant Career, filmed numerous blockbusters such as X-Men Origins: Wolverine, and was the filmmaker with Moorhouse on The Dressmaker.

The series begins with a young woman cycling around her hometown. She has been released from prison after serving her sentence for killing another young woman from the town. Sound familiar? This is not Troppo.

Savage River is set in Victoria, not in far north Queensland. That change in location is essential to the story that places Miki Anderson (played by Katherine Langford) in a community that knows her and her family. While the characters in Troppo were escapees from elsewhere, the characters in this series are embedded in the community. The snug fit of the people to their town is reflected in the cinematography with long shots of the town nestled into the river banks.

The lead writer in this series, Giula Sandler (Glitch), knows country towns. Her characters are familiar without being caricatures. The only employment is the local abattoir. It employs locals and refugees who have no other options for work. When a local man is killed in the abattoir suspicion falls on Miki.

Again, there is a parallel with Troppo but the difference between Troppo’s Amanda and Savage River’s Miki is stark. Miki has family, they are not always reliable and their motives are confusing, but she is not alone.

This series is worth watching in its own right and also interesting in how a change of location can affect character – Amanda’s character from Troppo would not work in Savage River.