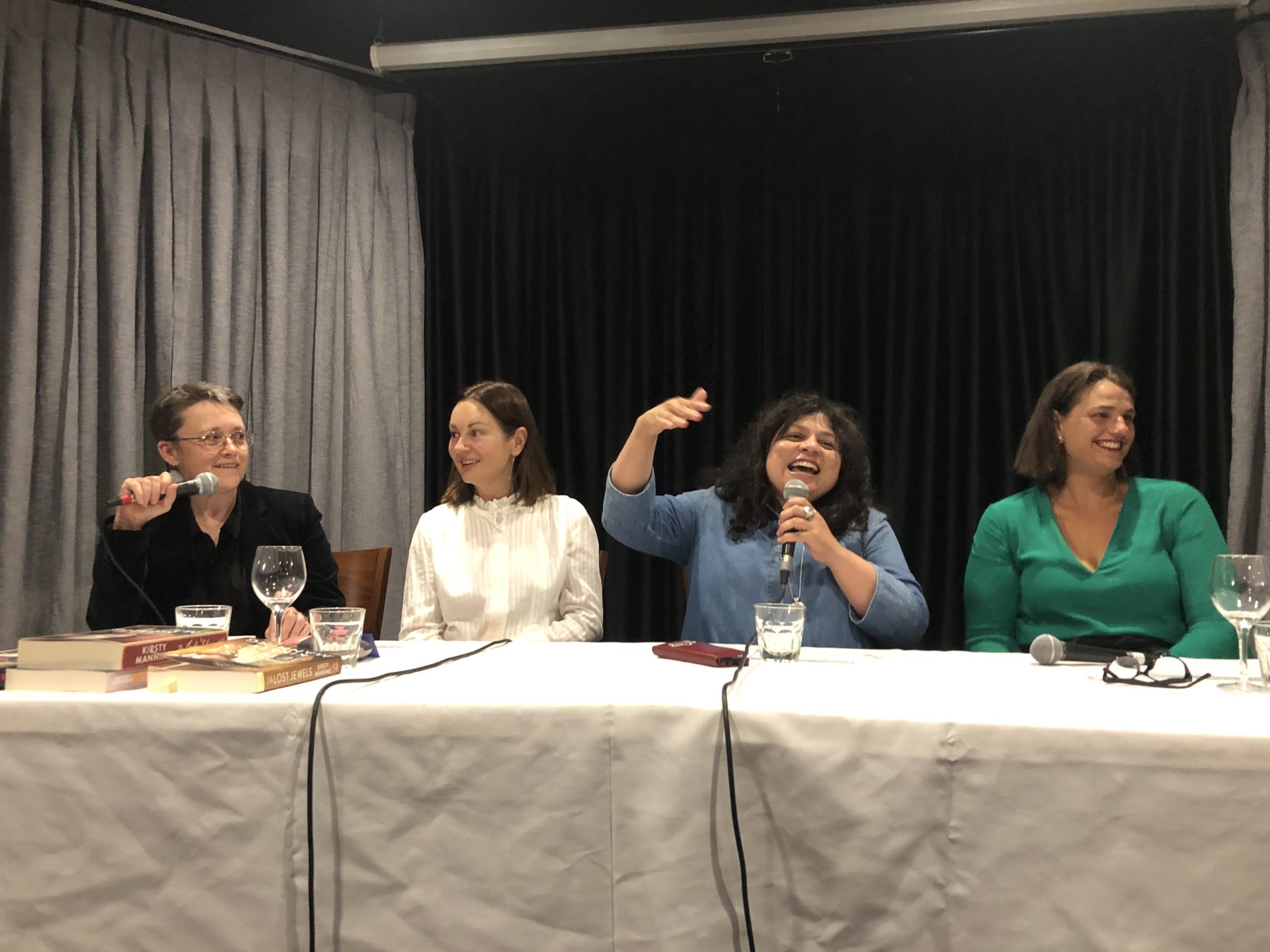 Sulari Gentill, Kirsten Alexander and Kirsty Manning dissected their most recent historical mysteries with Kelly Gardiner at Sisters in Crime’s Melbourne event, The Past is Never Dead, on 21 February. It was wonderfully successful – big crowd, big ideas and big laughs.

Since then, we asked all panellists to comment on how writers use readers’ historical knowledge or hindsight to create compelling stories of the past. 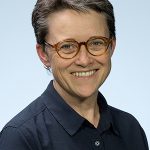 Kelly Gardiner, a convenor of Sisters in Crime, and author of a number of children’s and YA books including the time-slip trilogy The Firewatcher Chronicles, 1917: Australia’s Great War, and the Swashbuckler pirate trilogy, plus the adult novel, Goddess, said:

You all know the scene. A woman walks out of an office block into the dark night, assuming she can walk home safely. Children playing by the river near a quaint English village wonder what is floating in the water.

We know what’s coming. They don’t. This foreshadowing is a powerful element in crime fiction and, for that matter, in true crime. It’s particularly poignant in stories set in the past. There’s the crack of a cricket ball and the shouts of young men in the golden summer of 1914. A family gathers for a Sabbath meal in their Warsaw apartment in 1939. Blokes arrive for work one morning on Melbourne’s great new bridge span. Historical hindsight can build tension and empathy in the reader – we worry about what might lie ahead for these characters who are dancing after dinner at Raffles Hotel in Singapore or ignore the air-raid sirens. Their peace is about to be shattered. What will become of them? How will they navigate through the treacherous years ahead? It’s not so much whodunnit but who will survive?

A clever (some might say cruel) writer uses this to their advantage, acknowledging the historical understanding of readers and using it to engage them in the story, even if later the story heads off in unexpected directions. It can be funny (as in Kirsten’s Alexander’s Riptides, where Charlie says – circa 1974 – that Bali will always be an unspoiled paradise) or moving (in Kirsty Manning’s The Jade Lily, a family member is sent to a ‘work camp’ called Dachau, and his mother is convinced for years that she will be able to get him released). It can be downright threatening, like the undercurrents of violent fascism erupting in Sulari Gentill’s Rowland Sinclair series set in Sydney in the 1930s. Whichever way we use it, hindsight is one of the many useful tools in the historical crime and mystery writers’ toolbox, and one that can pack an emotional punch that is sustained and sometimes subverted throughout a novel. 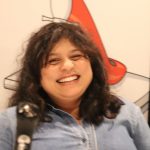 Sulari Gentill, who made it to Melbourne from fire-ravaged Batlow at the foot of the Snowy Mountains, is the award-winning author of 14 books including the Rowland Sinclair series set in the 1930s. Crossing the Lines won the 2018 Ned Kelly Award for Best Fiction. A Testament of Character (Pantera Press, March 2020) is the 10th in her Rowly series. Sulari said:

Just when you thought it was dead, the past has an awkward habit of resurrecting itself. Never was that truer than right now. The 1930s have risen again. The world flirts once more with extremism, and ’strong men’ are lauded as leaders—men who fan the flames of racism for their own political ends, men who are willing to trade the lives and security of some citizens for power, men who are following a playbook which led to the Second World War. Now as then, artists are steadfast in the resistance. And part of our role is to remind the world that we have been here before, and it did not end well.

A Testament of Character is the tenth book in the Rowland Sinclair Mysteries. It is based around a love story in a time of intolerance. The thirties saw the Western world regress socially from the new freedoms of the twenties. Economic hardship invited the simple solutions of far right-wing rhetoric then, as it does now.

We seem determined to repeat past mistakes while we refuse to acknowledge or recall the consequences. How often are we told that comparisons to Nazi Germany are taking things ‘a bit far’? But perhaps the role of writers is to do just that—to draw the comparisons that are not socially acceptable or comfortable, to remind our readerships of the past, and to point out its echoes in the present. Sadly, the Rowland Sinclair Mysteries are not just about the 1930s. 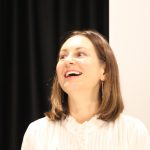 Kirsten Alexander has followed up on the success of her debut novel, Half Moon Lake, with another historical thriller, Riptides (Bantam Australia, February 2020), set in suburban Brisbane in the 1970s – and yes that now meets the historical novel criteria. Kirsten said:

I’m still wrestling with the idea that the 1970s can legitimately be called history or subjected to any version of hindsight. That decade was yesterday. But it is history, of course, though recent enough that I was alive.

I couldn’t call on personal experience for my first novel, Half Moon Lake. Neither the 1910s nor Louisiana featured in my own life. But for Riptides, which is set 46 years ago, I summoned memories of being a child in Brisbane, watching Countdown, eating mangoes and bananas picked from backyard trees, walking on seagrass matting, wearing appalling combinations of orange, brown and green, swimming unsupervised, and overhearing my parents despair about Joh Bjelke-Petersen (while they drank cask Moselle, because… 1970s). I remembered watching Harry Butler and the Leyland Brothers on tv as they showed us the wonders of the Australian bush, and told us to take our rubbish home when we went camping. I wore a Save Water Shower with a Friend t-shirt at primary school (I know, I know). I decided, with hindsight, that this was a golden era for environmental thinking and cinema and a godawful era for many other things.

But the world is complicated, and memories can’t entirely be trusted. Mine or anyone else’s. They’re selective, patchy, sometimes sentimental and simplistic, sometimes protective or defensive. They depend on where your seat is in the room. So hindsight is rarely pure, even when based on provable fact. It can be ‘judgey’. (We’re certain we would have acted better, been braver, not worn blue eyeshadow…) It can also lend wisdom and compassion. (Because, back then, without money or property perhaps any woman would make x, y or z choice…)

And this is fine, because complexity is good. Fiction set in the past captures the essence of a time and place, walks around in it, uses some of its language, watches as imagined people make questionable and uninformed decisions. If I want analysis and explanation, I’ll read nonfiction. My sweet spot as a reader is fiction that marries fact, speculation, thoughtful invented conversations, interactions between people who have never existed, and a dash of subjective hindsight. 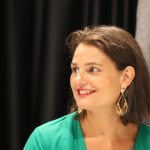 Kirsty Manning is the author of The Midsummer Garden and The Jade Lily (both Allen & Unwin). The Jade Lily has also been published in Germany, The Netherlands, the US and Canada as The Song of the Jade Lily. Kirsty’s new historical mystery, The Lost Jewels, is due out in April – and it’s based on a true story! Kirsty said:

I like to start on my novels with a little-known pocket of history. The Jade Lily was inspired by a holiday visit with my family to the Shanghai Jewish Refugees Museum, where I discovered that Shanghai had opened its doors to over 20,000 refugees fleeing Europe, at a time when no other country—including my own—would. How had I missed this crucial snippet of history?

I discovered it was possible pre-1940 to be released from a concentration camp if you had a valid passport, visa, permit to take up residency in another country and proof of transport. Such release was always subject to the prisoner leaving Germany within a limited time. The timeframe varied case to case. A Chinese visa did not guarantee passage to the Far East. If you failed to leave within the stipulated time, you were taken back to the concentration camp.

Ideas for The Jade Lily started to bloom. I started to think about friendship and loyalties, the price of love and the power of war. How hardship and courage can shape us. The unexpected bargains that are made when we make our own rules. What does it mean to be generous as a person? And as country? What is our duty?

It isn’t lost on me that while I wrote a story about refuges and how China opened their doors and hearts to the Jews, Australia locks up refugees who attempt to come here via boat, and in one particularly disturbing development, had left refugees on Manus Island to fend for themselves. Still more have been lost in boats from Africa and Turkey trying to make their way to Italy, Greece and onto northern Europe. Thousands of Syrian refugees remain stranded along borders in Jordan. President Trump wants to build a wall. Why haven’t the lessons of history taught us to treat people better? Is while I’m writing historical fiction, I’m trying to shine a light on contemporary issues and create some empathy for the reader.

My upcoming novel The Lost Jewels (out in April) is also an imagined tale woven between the facts. I particularly love bringing to life women’s voices that have long been overlooked or dismissed. For me, a novel begins between the gaps of history. I build my world on the bits we don’t know. This gives me opportunity to explore the dark, difficult and joyful parts of human nature.

In the 1600s, Cheapside was the hub for gold, silver and precious gems that had threaded their way around the world to London. However, this century was also filled with fire, plague, revolution and an expanding empire … Seventeenth-century London was a city equal parts thriving and in turmoil. There were a million reasons why someone might not return for their precious jewels. Today, the world feels precarious and unsteady. We now have lethal viruses threading around the world, sections of Australia are on fire, and around the world we see questionable leadership and brinksmanship between leaders. Now more than ever we need the lessons of history to help us navigate the future. Lest we forget, indeed.