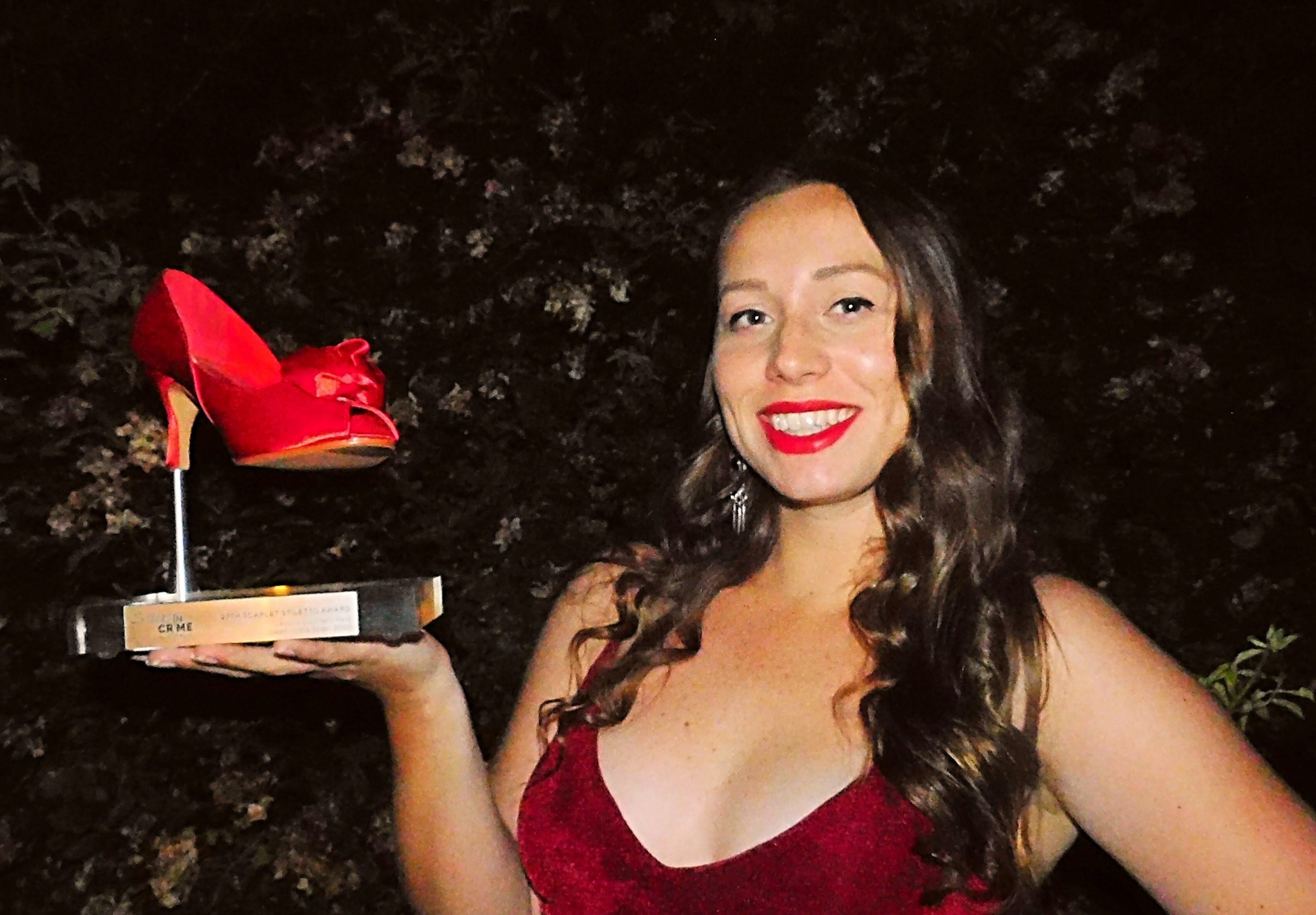 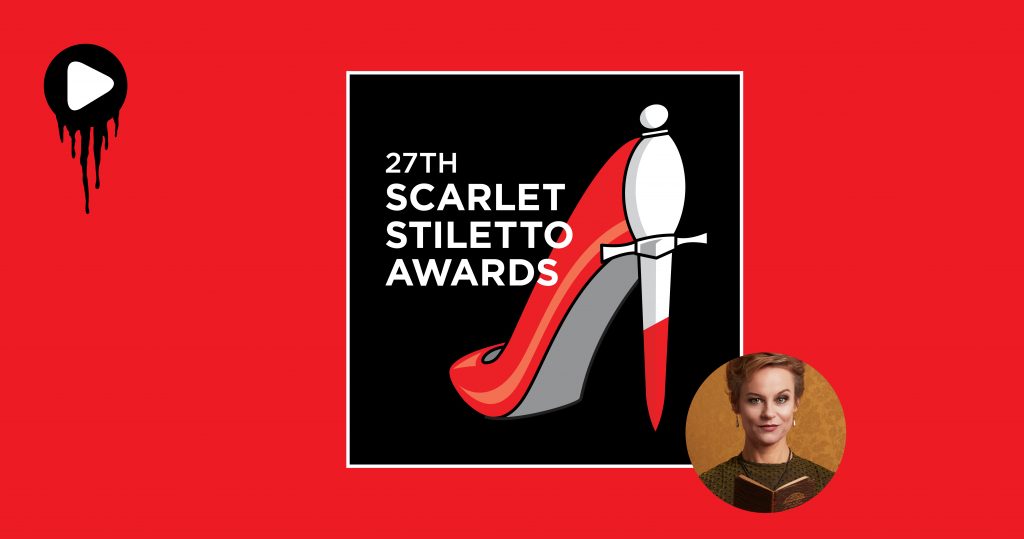 Southern-Reid, a first-time crime writer, was awarded the Swinburne University of Technology First Prize ($1500) and the coveted trophy, a scarlet stiletto shoe (this year in satin) with a steel stiletto heel plunging into a mount. Her World War 11 story about women pilots, “Death in The Skies,”, also took out the Every Cloud Production’s History with Mystery Award ($750).

Southern-Reid grew up on a farm on the NSW coast. In 2013 she went to Scotland and accidentally stayed for seven years, falling utterly in love with the UK. The pandemic cut short her stay – she had almost notched up the seven-year residency needed to study literature and archaeology in Edinburgh – and she is now back in Bermagui, working in a bar and contemplating her future.

Southern-Reid has four “more or less fantasy” novels on the go but has been reticent about trying her hand at crime. “With fantasy, you can make it up. With crime, it’s more complicated,” she said.

“I’ve been stalking Sisters in Crime for a few years now and, with the pandemic, I thought I might as well give it a crack. I’m smiling ear to ear. When I was rung with the news, I had just started reading Tara Moss’s novel, The War Widow, and she got her start as a writer with the Scarlet Stiletto Awards. It was a moment of serendipity.”

This year, a record 241 short stories written by Australian women competed for a record $10,460 in prize money and benefits. Over the past 27 years. 3896 stories have been entered with 28 (soon to be 29) Scarlet Stiletto Award winners, including category winners, going onto have novels published.

Participating online at different stages were nearly all 25 shortlisted authors, together with Professor Christina Lee, who presented the judges’ report and Dr Carolyn Beasley from Swinburne University, the first prize sponsor.

Professor Lee, a two-time Stiletto winner, said that the pandemic had made for an ‘interesting’ writing environment.

“There’s been tragedy for some of us, of course, but for many it’s been endless months of lockdown Endless months of lockdown, quarantine, curfews. Same same same. Can’t go out, can’t bear staying in, can’t eat another crumb of sourdough without exploding, can’t bear the sameyness another minute. It’s illegal to murder your housemates, so why not write some nice juicy crime fiction?” she said.

“[The result has been] a wonderfully diverse bunch of stories. There were bushrangers and time travellers and pilots and hitwomen and nice old ladies; there was poisoning and bludgeoning and some things too distressing to recall. Quite a few stories mentioned the pandemic, some just in passing, some as a central pillar of the plot. This year also saw a lot more horror and rather more supernatural weirdness than usual, perhaps inspired by those strange COVID dreams we’ve all been having,” she said.

The Simon & Schuster Second Prize ($1000) went to WA writer, Cheryl Rogers (West Swan) for her story, “Monitor,” set during the Spanish flu pandemic following World War 1. “Monitor” also took out the Writers Victoria Crime and Punishment Award for the story with the most satisfying retribution and the prize of a three-month residency in Old Melbourne Gaol.

Rogers said that writing stories for the competition over the past 16 years had brought out her inner ‘Erin Brockovich’ and she puts quite a bit of her time and talents into objections to flawed planning proposals.

The Sun Bookshop & Wild Dingo Press Third Prize ($500) was won by Ashgrove (QLD) author, Veronica Lando, for her story, “A View for Tea and Biscuits”, set in a retirement village. Lando is physiotherapist who has previously been published through the Queensland Writers Centre. This is her first entry in the Scarlet Stiletto Award.

The inaugural Monash University New Writer Award ($500) for 19-25 years old went to Ellen Vickerman (Carindale, QLD) for her story “Leash”. Vickerman is an emerging writer who fell in love with crime and noir fiction through entering Scarlet Stiletto competitions as a teenager (and winning a swag of awards, especially in the youth category). She is currently studying a Master of Philosophy at QUT, where she is researching uses of experimental narrative structures for telling stories of climate change. She is only 21 so will be eligible to enter this award for years to come.

Natasha Nette (Brunswick, VIC) took out the Affirm Press Young Writer’s Award ($500), for under 19s, for “Signs of Life,” a story told through the ghostly eyes of a young mother. Nette, 14, is a Year 9 student and huge theatre nerd, who enjoys writing, music and movies. In 2019, she was part of a team that won second place in the Improv Melbourne’s state school championship. She has more ideas for stories than she has time to write them down. Both her parents are crime writers and her mother, Angela Savage, won the Stiletto in 2011.

The Melbourne Athenaeum Body-in-the-Library Library Award ($1250) went to Kristin Murdock (Warooka, SA) for “The Irony of Silence”. Sharing a birthday with Agatha Christie, Murdock was bound to turn to crime – fictionally at least! Her current project is a rural crime novel where the victim meets a grisly end courtesy of a sharply-pointed bale hook.

The Melbourne Athenaeum Body-in-the-Library Library Runner-Up Award ($750) was won by Fin J Ross, for her story, “Murder by the Book”, where the murder at a writers’ retreat (loosely based on Varuna) is accomplished via a volume of the Complete Sherlock Holmes. Ross has several Scarlet Stiletto awards to her credit. Her historical novel-with-a-mystery, Billings Better Bookstore and Brasserie, was released in June. She has almost completed a sequel to her rural crime novel, and is looking for a publisher. A true crime anthology, written with her sister, will be released in February 2021.

The International Association of Forensic Linguists Award ($800), now in its third year, was won by Dr L. J. M. Owen (Cradoc, TAS) for her story, “The Wrong Verdict”, about a blind court stenographer with a passion for justice. This story also took out the Queensland Chapter of Sisters in Crime’s Liz Navratil Award for the Best story with a Disabled Protagonist ($300). A second story by Dr Owen, “House of War,” set in 1938 Brisbane, won ScriptWorks’ Great Film Idea ($200).

Dr Owen is an author, librarian and archaeologist with a passion for reclaiming women’s history. The host of TAF’s Booklove Tuesdays and director of the Terror Australis Readers and Writers Festival, Her novels include The Great Divide, a police procedural.  and the Dr Pimms’ archaeological mystery series: Egyptian Enigma, Mayan Mendacity and Olmec Obituary.

Nicola Wardley, who hails from New Farm, QLD, won the Kerry Greenwood Malice Domestic Award ($750) for “The Garden Fork Murder”. Wardley snoops through dusty accounting records by day and saves her creativity for early morning coffee dates with her keyboard. Under her pen name, Stella Quinn, she about to publish two rural romances with Harlequin. She is plotting a not-so-cosy crime series for her characters Elsa and Inspector Fox from “The Garden Fork Murder”.

The HQ Fiction Award for Best Thriller ($500) went to Hayley Barry-Smith (Sunshine Plaza, QLD) for “Mrs. Betty Jones: Lady Vigilante,” featuring an Avon Lady with a dark past in 1940s’ New York. Barry-Smith has a background in archaeology and science and has published books in sci-fi and gaming before turning her hand at crime to win The Kindle Book Review Reader’s Choice Award in 2019.

The Clan Destine Press Cross-Genre Award ($500) was awarded to Jane E Lee (Kensington. NSW) for her story “Viral,” set during the pandemic. Lee has published mystery stories in magazines and her work has been shortlisted three times for the Scarlet Stiletto. In 2019 her story “Into the Park” was commended in the non-fiction section of the Thunderbolt Prize. When not writing, she volunteers with Lifeline and with elderly or terminally-ill people to help them write their life stories for loved ones. 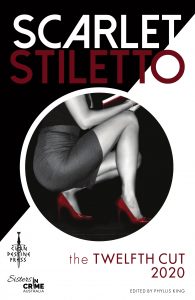 Garner also launched Scarlet Stiletto: The Twelfth Cut, a collection of winning stories from this year’s competition  edited by Phyllis King – $5 as an e-book from the publisher Clan Destine Press or $5.99 from Booktopia, Amazon, or iTunes. Eleven earlier collections are also available: https://www.clandestinepress.net/