A record $10,460 is up for grabs in Sisters in Crime Australia’s 27th Scarlet Stiletto Awards for best short crime and mystery stories by Australian women.

Cate Kennedy, whose literary career was kick-started by winning the first two Scarlet Stiletto trophies back in 1994 and 1995, launched the awards online. (Click on the image below for the YouTube link.) 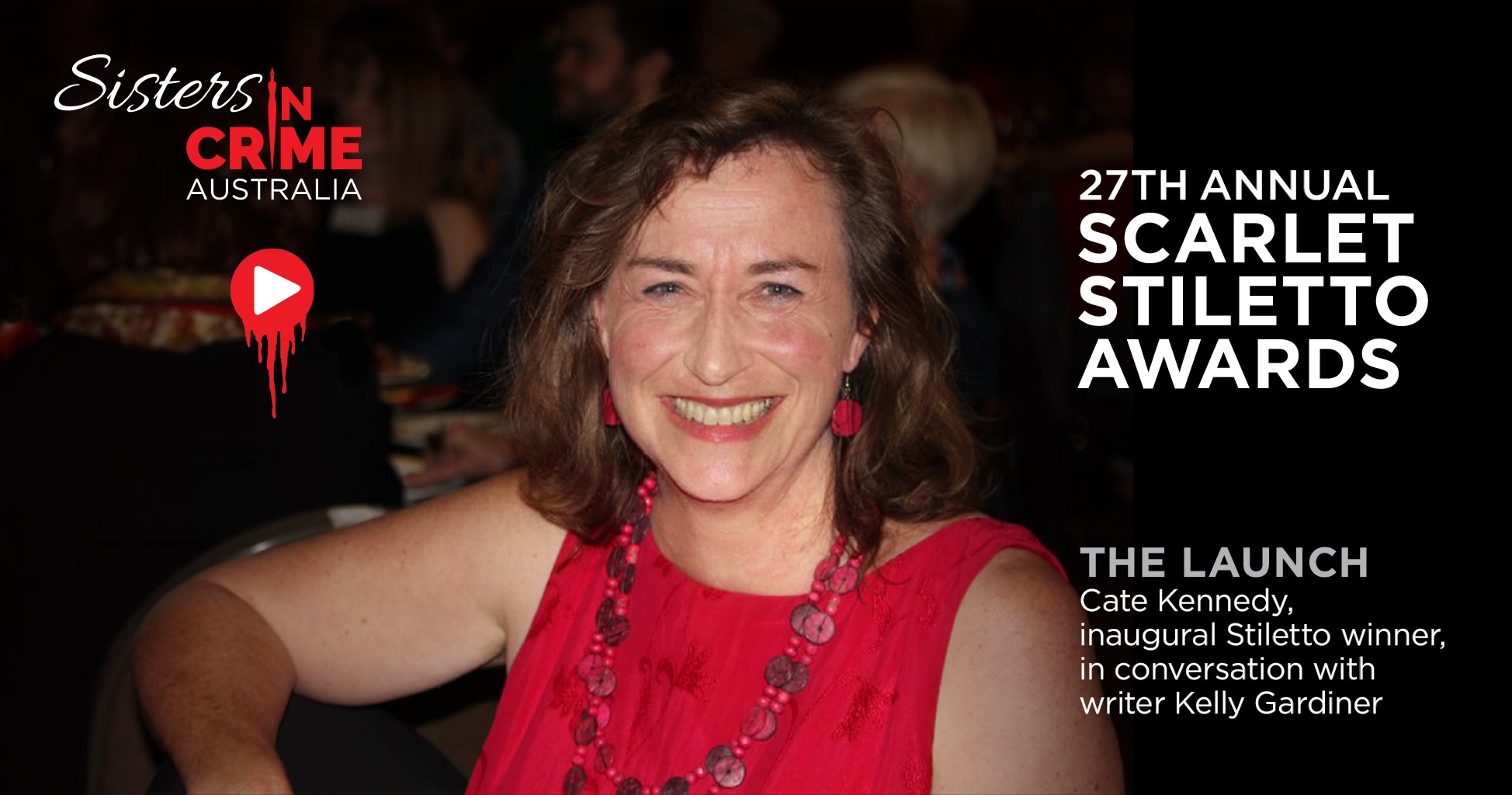 “Crime does pay – at least on the page,” said Carmel Shute, secretary of Sisters in Crime. “And writing is a lot safer than robbing a bank.”

“We’re thrilled that nearly all sponsors have continued their support despite these financially fraught times – and that new supporters have come on board.”

“As crime fiction scholars we are always interested in emerging writers who push the genre in new directions and to take an active role in this is a great honour. We set up the Monash Crime Fiction Project to bring scholarship and practice together in new and innovative ways that will hopefully make a tangible impact on crime writing in this country. In this respect we value our partnership with Sisters in Crime.”

Martin Hughes, Publishing Director (and CEO), said, “Affirm Press is delighted to sponsor the Scarlet Stiletto short story competition Youth Award because there is no better way for new writers to cut their teeth than through short fiction, and no better curators of crime/mystery fiction than Sisters in Crime.”

Melbourne Athenaeum Manager Sue Westwood said that the library had been proud to support the Body in the Library Award over the past eight years – and has now increased the overall prize money by $500 to $1250 ($750 runner-up).

“Melbourne Athenaeum has been delighted by the calibre of the stories that the Body in the Library Award has elicited since 2012. They have been a tribute to the creativity of crime writing and a homage to the famous 1942 novel of the same name by Agatha Christie. In her foreword, Christie describes ‘the body in the library’ as a cliché of detective fiction and then proceeds to parody it,” she said.

“The Body in the Library Award allows crime writers from all over Australia to play with this staple of ‘cosy’ crime fiction. It’s such fun!” (To read the previous winning Body in the library stories go to https://www.melbourneathenaeum.org.au/partnerships)

The Best Bushranger Story is not being offered. (In 2019 it was an initiative of the Terror Australis Readers and Writers Festival which is not held this year.)

Shute said that the sponsors were a diverse bunch. They include Swinburne University and Monash University; book publishers Simon & Schuster, Affirm Press, HQ Fiction, Wild Dingo Press and Clan Destine Press; the Melbourne Athenaeum Library; Every Cloud Productions and Scriptworks from the world of film and television; the International Association of Forensic Linguists; Writers Victoria; long-term supporters the Sun Bookshop; the Queensland Chapter of Sisters in Crime; and individuals such as author Kerry Greenwood, a founding member of Sisters in Crime Australia.

“What all fifteen sponsors have in common is an unswerving commitment to women’s writing. which has paid off in spades. Since the awards began 27 years ago, 3655 stories have been entered and 28 winners – including winners of the Shoe and category winners – have gone on to have books published,” Shute said.

Closing date for the awards is 31 August 2020. The entry fee is $25 or $20 for Sisters in Crime members. Maximum length is 5000 words. The awards will be presented at a ceremony in Melbourne in late November, pandemic permitting.

To download an entry form and a list of FAQs or to pay the entry fee, go to:
https://sistersincrime.org.au/the-scarlet-stiletto-awards/