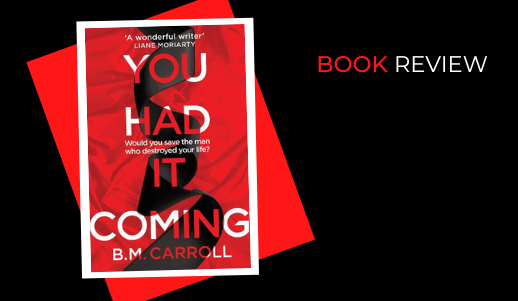 by B M Carroll

WOULD YOU SAVE THE MAN WHO DESTROYED YOUR LIFE?

When paramedic Megan Lowe is called to the scene of an attempted murder, all she can do is try to save the victim. But as the man is lifted onto a stretcher, she realises she knows him. She despises him. Why should she save his life when he destroyed hers?

Jess Foster is on her way home when she receives a text from Megan. Once best friends, the two women haven’t been close for years, not since the night when they were just the teenage girls whom no-one believed; whose reputations were ruined. All Jess can think is, you had it coming.

Now Megan and Jess are at the centre of a murder investigation. But what secrets are they hiding? Can they trust one another? And who really is the victim?

BM Carroll’s You Had It Coming hits the ground running with a Sydney ambulance being called out to an emergency where a middle-aged man has been shot several times. Very quickly, one paramedic, Megan Lowe, realises that she knows – and loathes – the victim, William Newson. The man whose life she has tried to save was a lawyer who effectively destroyed her life 12 years before, when he destroyed her reputation during a rape trial.

Newson’s death – and the coincidence of Megan’s presence – is the catalyst that blows open past trauma for Megan and her former friend Jess Foster, who was likewise cruelly dismantled in the courtroom while their rapists were set free.

It’s important that from the start of the story, the reader understands that there’s no ‘alleged’ in the assault that took place when they were teenagers. Whatever the court decided, and however Newson persuaded the jury of his clients’ innocence, Megan and Jess’s trauma is real and unequivocal. We believe them. We also believe in their airtight alibis for the night of his shooting.

As the story unfolds, that certainty is almost the only one that exists. Carroll’s book explores not only the traumatic impact of that event upon their lives, but how it has affected everyone around them – parents and siblings, current boyfriends, colleagues. The families of the accused boys – and the boys themselves – are also affected in a variety of ways that don’t become clear until much later in the story.

As lead detective, Bridge Kennedy, investigates the shooting, the case encourages her to reflect on the rape in the context of her own teenage daughter and son. Megan and Jess have alibis, and the suspect list keeps growing rather than diminishing. Are their loved ones angry enough to have acted? Are other young women and their families – devastated in other cases when Newton helped their accused rapists get off or avoid charges – angry enough to have killed him?

And so a 12 year old rape trial continues to have repercussions for everyone who comes into contact with it and its new consequences.

You Had It Coming reads easily, with Carroll’s light and compassionate touch leading you through an emotional and psychological minefield. The complexity of the characters’ histories, lives and feelings unfolds at the perfect pace, as do the revelations about people in their lives which result in Bridget Kennedy’s ever-growing list of suspects. Carroll even offers a thoughtful examination of Newton’s motivations, allowing the man we only see through other people’s eyes, and in courtroom summary flashbacks between some chapters, to have a degree of complexity himself.