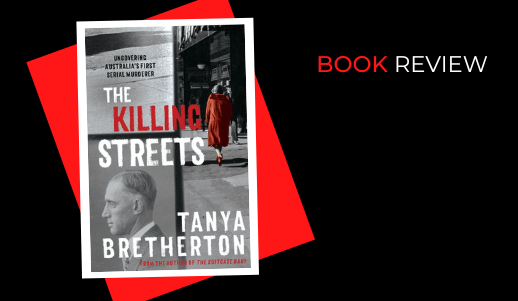 From the acclaimed author of The Suitcase Baby and The Suicide Bride, the story of a series of horrific murders that began in 1930s Sydney – and a killer who remained at large for over two decades.

In December 1932, as the Depression tightened its grip, the body of a woman was found in Queens Park, Sydney. It was a popular park. There were houses in plain view. Yet this woman had been violently murdered without anyone noticing. Other equally brutal and shocking murders of women in public places were to follow. Australia’s first serial killer was at large.

Police failed to notice the similarities between the victims until the death of one young woman – an aspiring Olympic swimmer – made the whole city take notice. On scant evidence, the unassuming Eric Craig was arrested. But the killings didn’t stop…

This compelling story of a city crippled by fear and a failing economy, of a killer at large as panic abounds, is also the story of what happens when victims aren’t perfect and neither are suspects, and when a rush to judgement replaces the call of reason.

This book about a series of murders of women in Sydney’s eastern suburbs from the 1930s onwards sits in the intersection between true crime, history, historical fiction and crime fiction. By the author of The Suicide Bride and The Husband Poisoner, it catches the reader’s attention from the start and leads them on an intriguing and at times emotional journey.

The bodies of the first identified victims, Hilda White and Iris Marriott, were found in 1932. That year is often remembered as the year the Sydney Harbour Bridge opened with great fanfare, but at the time Sydney was still suffering through the Great Depression, with high unemployment and associated poverty and homelessness. Iris and Hilda were struggling to make a living as many women did at the time, selling sex to strangers. They were murdered with extreme violence, their stripped bodies abandoned in Sydney parks. A third victim, Bessie Connor, was murdered in a similar fashion in December 1932. The police identified a connection and labelled them “the Park Murders”. Eventually a suspect is identified.  But there are more twists and turns to come, as well as more murders.

Like Hallie Rubenhold’s book The Five, about the victims of Jack the Ripper, The Killing Streets does not define the victims by their murders. These are real women, with lives, loves and difficulties, as well as loved ones left behind. Bretherton is not only interested in the crimes and who committed them, but what they tell us about the growth of the city and its public spaces, the role of the motor car, the power of the media to shape attitudes, the lives of women and the failures of the legal system.

While the book has been marketed as “uncovering Australia’s first serial murderer”, the reader should not expect an expose or a sensational finish. Bretherton has found a number of murders of women with common factors which were overlooked by police at the time, but there are no easy answers. This is a meticulous and sometimes lyrical examination of how a murderer (or possibly murderers) operated on Sydney’s “killing streets”, and of the trail of destruction left behind.

‘Serial Killer’ is a term that’s been in use for a relatively short period of time and certainly unheard of in early 20th-century Sydney. A series of brutal murders in the Harbour City brought to light the vulnerability of women simply trying to get by in Depression-era Australia. Tanya’s extensive research into the period lays bare the prejudices which still exist today –  the hunt for the murderer of young women dismissed as ‘prostitutes’ (to use the vernacular of the time) wasn’t taken seriously until an aspiring Olympic swimmer was found dead, presumably killed by the same man.

The shortcomings of police, not only hampered by the lack of forensic understanding we have today, but also a culture of victim-blaming and presumption of guilt, saw a possibly innocent man convicted. Despite the absence of significant hard evidence, Eric Craig was charged and imprisoned for the murders. Was he wrongly incarcerated whilst the real murderer was free to continue the killings that plagued Sydney for several years to come?

As a voracious reader of true crime, I find some true crime authors can be dry and academic, however Tanya’s style is incredibly engaging, weaving snippets of court documents, newspaper articles and police interview transcripts into a gripping and engaging tale. I particularly admire the descriptive passages, depicting the nuances of everyday Australian life that’s rarely captured by glamorous movies and TV shows set the 1920s and 30s. The conversations and emotional reactions of the players in this story, whether taken directly from transcripts or creatively constructed based on research, transported me directly to Eric’s dreary lodgings, the sinister atmosphere of a CIB interrogation room and the high drama of the magistrate’s court in 1930s Sydney. I felt like a voyeur (in a good way!) looking on as these unfortunate events unfolded.

The Killing Streets highlights how many things may have changed, yet how attitudes and prejudices towards women have not progressed has much as we would like to believe. This, along with Tanya’s other two books, The Suicide Bride and The Suitcase Baby are a must for any historical true crime fan’s bookshelf.