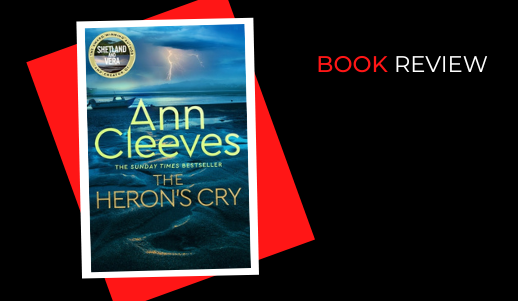 North Devon is enjoying a rare hot summer with tourists flocking to its coast-line. Detective Matthew Venn is called out to a rural crime scene at the home of a group of artists. What he finds is an elaborately staged murder – Dr Nigel Yeo has been fatally stabbed. His daughter, Eve, is a glassblower, and the murder weapon is a shard of one of her broken vases.

Dr Yeo seems an unlikely murder victim. He’s a good man, a public servant, beloved by his daughter. Matthew is unnerved though to find that Eve is a close friend of Jonathan, his husband.

Then another body is found – killed in a similar way. Matthew finds himself treading carefully through the lies that fester at the heart of his community and a case that is dangerously close to home . . .

The Heron’s Cry features characters previously introduced in the first book in the Two Rivers series The Long Call. DI Matthew Venn and his husband Jonathon; and Venn’s team of DS Jen Rafferty, DC Ross May and their families feature in the novel along with minor characters from Jonathon’s place of work, the Woodyard.

Cleeves’ wonderful imagination conjures a vivid and detailed world set between the Torridge and the Taw rivers in North Devon.

A murder occurs in a group of artist’s rural home in which the murder weapon is a fragment of a glassblower’s vase. The deceased is the glassblower’s father which raises questions as to why the artist’s pieces of work were used in two murders. Did the murderer intend to incriminate the artist or was the murderer out for revenge?  And why did the victim want to meet DS Jen Rafferty at a party hosted by her friend and local magistrate Cynthia Prior?

The Heron’s Cry highlights the long lasting effects of mental health in both families and the communities, creating the perfect atmosphere for a murder or two!

DI Matthew Venn and his team pursue leads through many twists and turns, and with a touch of inspiration finally solve a baffling murder mystery.

The Heron’s Cry is a character driven story with strong performances by the sombre DI Matthew Venn, the single mum with two teenagers DS Jen Rafferty and the newest uppity member of the team DC Ross May. Conflict in the personal lives of all three of the main characters demonstrate how even with a busy and stressful work life there is a personal life that also takes just as much energy and input as solving the murders.

I recommend The Heron’s Cry and believe it can be read as stand-alone novel without reading the previous book in the series.