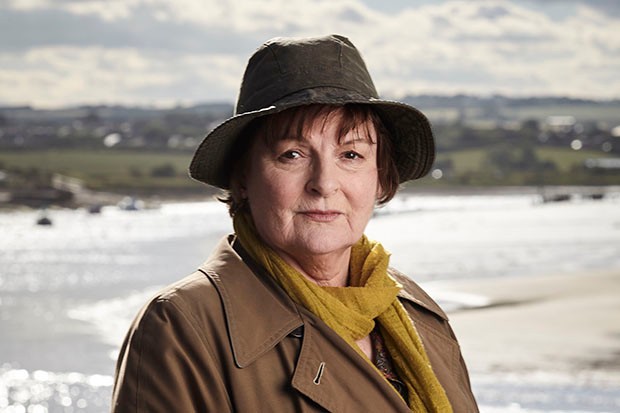 In a new series in The Conversation, writers pay tribute to fictional detectives on the page and on screen. Here Sisters in Crime’s Ambassador, Sue Turnbull, pays homage to Vera.

Vera stands on a windswept headland contemplating the disgruntled North Sea. She’s clad in her usual garb; the battered hat, the annoying scarf and the tent-like mac that swirls around her stocky legs and scruffy boots.

When I first met Vera Stanhope in the crime fiction of Ann Cleeves, I liked her, but not so much. It wasn’t until Brenda Blethyn brought her to life in the 2011 ITV series Vera that I became truly enamoured.

Ten seasons later, with series 11 already commissioned, Blethyn has made Vera well and truly hers through a variety of mannerisms that are easy to mock but hard to get right.

A woman with quirks

Emily Taheny recently had a go on Sean Micaleff’s Mad as Hell but didn’t quite get there. Vera is much more than the hat, the Columbo mac and the attitude.

Blethyn’s version of Vera includes a wide range of audible “hmmphs”, the interrogative “hmmmms?”, and a chesty cackle. Blethyn also does a lot with her eyes. There’s Vera’s hawk-like gaze that can spot a lie at a hundred paces. There’s the evasive sidelong glance when she’s got something to hide, usually her drinking or a sugar fix.

And let’s not forget Vera’s walk, that determined short-legged stride that somehow gets her where she wants to be faster than anyone else.

In terms of genre, Vera sits within the tradition of the elderly female sleuth. This would include Miss Amelia Butterworth who first appeared in Anna Katherine Green’s That Affair Next Door first published in 1897. Thirty years later, Miss Marple picked up her knitting and nosed onto the scene of crime.

The key difference is that Vera is no amateur, but a Detective Chief Inspector in charge of a major team whom she routinely berates like recalcitrant school pupils who haven’t done their homework.

No doubt about it, Vera can be rude and impatient. She’s also partisan, favouring her young male colleagues over her female ones, while torturing Detective Constable Kenny Lockhart (Jon Morrison) with endless boring routine investigations. Sometimes she’s hard to like.

But Vera also has extraordinary empathy with the hard done by in an area where people have been doing it tough for a very long time. The North East of England is a region of spectacular beauty, deeply scarred by the effects of the industrial revolution that ended with the closing of the mines and the shipyards in the 1980s. It’s also my home, although I left it a long time ago.

Read more: From crime fighters to crime writers – a new batch of female authors brings stories that are closer to home

One of the now well recognised pleasures of reading crime fiction or watching a TV crime drama is the sense of place. Whether the location is evoked on screen or on the page there is always a significant relationship between the characters and the environment that has shaped them.

In a fascinating essay on the phenomenon of the TV detective tour, cultural heritage professor Stijn Reijnders outlines the difference between two sorts of places: the lieux de mémoire (places of memory, as described by Pierre Nora) and his concept of lieux d’imagination (places of imagination).

While the former are “real” locations that serve as places of pilgrimage to memorialise past events (think Gallipoli), lieux d’imagination are the places we visit that are associated with fictional happenings, such as the Morse tour of Oxford or the Wallander tour of Ystad.

Such forms of cultural tourism enable readers, or indeed viewers, to pass from the real world into the fictional one and back again on a journey of the imagination.

Read more: My favourite detective: Kurt Wallander — too grumpy to like, relatable enough to get under your skin

As convincing as Reijnders’ argument might be, it doesn’t quite encompass how I relate to the landscape inhabited by Vera which evokes my own lieux de mémoire.

Vera’s stone cottage on the moors reminds me of our family holidays in Northumbria where I would ride the moors on a grumpy, rotund, Shetland pony that might well have been called Vera.

Every time Vera goes to Newcastle, I’m fascinated by how much cleaner the quayside looks since I last stood on the sooty pavement and contemplated the mucky Tyne bridge, the junior sibling of the Sydney harbor bridge: two bridges that connect where I was then with where I am now.

And I’m particularly delighted when Vera ends up in South Shields, my home town, and has an intense conversation with a witness or a suspect on the foreshore when there’s no reason to be outside except to capture the view.

Although I take great delight in the familiar locations, I’m constantly arguing with the geographic logic of the series while being surprised that it’s not raining — although in my memory it always is.

And so I oscillate, between the fictional and the remembered, with Vera as the character who tethers me to both through a narrative that takes me to another time and place where the answers will always be found by a smart, dumpy, older woman in a raincoat.