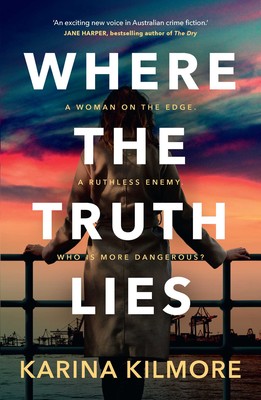 She was slipping away. The further she fell, the closer the clouds seemed to come. Wispy transparent slipstreams of white. Cirrus. Pain smashed her head. Floating …

When investigative journalist Chrissie O’Brian lands a senior job at The Argus, she is desperate to escape the nightmares of her past. Her life has become a daily battle to numb the pain. But her job is something she can do better than anyone else – and the only thing that keeps the memories at bay.

A face-off on the waterfront between the unions and big business is just the kind of story to get her career back on track. But after a dockworker who confided in her turns up dead, Chrissie becomes obsessed with unravelling the truth. When a gruesome threat lands on her desk, it’s clear someone is prepared to do anything to stop her.

But who is more dangerous – a ruthless enemy or a woman pushed to the edge? Used to fighting her own demons, this is one battle Chrissie is determined not to lose.

Where the Truth Lies was shortlisted for the prestigious Unpublished Manuscript Award in the 2017 Victorian Premier’s Literary Awards.

Reading Karina Kilmore’s debut novel, Where the Truth Lies, I was reminded of US author Sara Paretsky’s first books. Appearing in the early 1980s, they identified webs of wrongdoing in contemporary industry, corporations, government, and institutions. Their storylines were propelled by a tough-minded female investigator at a stage when there’d been a slump in women writing detective fiction with female protagonists. These books earned their popularity, alongside those of authors such as Sue Grafton and Marcia Mueller, so much so that this year Paretsky releases the 20th novel in her series.

Melbourne-based Kilmore, a former finance journalist, looks to have a range of interests and understanding of interconnectedness rivalling Paretsky’s. And she writes fluently, her descriptions often lyrical. There’s every chance we’re seeing the beginnings of a substantial antipodean series that will inform and analyse while it entertains.

Kilmore’s protagonist is a journalist employed in the commercial media during a recent period of sackings and automation. Eager for Australian recognition after investigative successes in New Zealand, Chrissie O’Brian has been researching tensions at the Port of Melbourne, where for six months unionists have been protesting a run of worker injuries and deaths and the automation of container handling.

Chrissie’s first story on this was slashed, but she continues arguing for space: “the strike, the city, big business. Whole place is a fire cracker.” Readers who remember the ferocious images and disputation produced by the 1998 lockout on Australian wharves will take Chrissie’s point.

Shortly after Chrissie visits the docks, the female crane operator she interviewed dies in an alleged accident. Grange Industries, a US multinational investor in terminals, manoeuvres to deflect Chrissie’s investigation, and Chrissie is reassigned from News to Obituaries.

Regular readers of mainstream crime fiction will recognise other tropes, including the hungover wake-up, the grungy streets, the disastrous personal history, and the attractive cop. Chrissie’s acute psychological vulnerability has the advantage for readers of rendering her somewhat unpredictable: the novel can deviate from the successive-interviews pattern of some former journalists’ books.

One year ago, Chrissie O’Brian packed her bags and moved away from her failed life in rural New Zealand to take up a position with The Argus newspaper in Melbourne, Australia. She is struggling to fit in with the office crowd, is a loggerheads with her boss, and  refusing to acknowledge the depths of her alcoholism.

After being sent to do a fluff piece on a female crane operator at a Melbourne shipping terminal, O’Brian uncovers a number of workplace health and safety issues that have resulted in a series of suspicious, poorly reported accidents and deaths. She becomes convinced that there is more to the story than union powerplays and employee negligence and undertakes an investigation to uncover the truth.  But her efforts are hampered by issues at the paper. There are redundancies looming large, she’s uncertain if she can trust her police contacts, someone on staff seems to be leaking her findings to the shipping company management, and just when she starts getting traction on the story, she is moved off the news desk and into the Obituaries department.

Where the Truth Lies has a real Melbourne/Nordic Noir feel about it. I suspect this is partly due to the seasonal descriptions of Melbourne and the grungier suburbs featured (mainly Fitzroy and the docks areas), or perhaps it’s my recollections of the now abandoned Argus building in Elizabeth Street.

Chrissy O’Brian is a fantastically flawed heroine, whose every pain is etched deeply into the pages of the story. The other players are a fascinating and mixed bunch with varying levels of character development. The plot builds smoothly, enticing the reader to keep pushing until the end. It is a hard one to put down.

I thoroughly enjoyed this story and consider it an excellent debut novel. Kilmore’s experience as a journalist shines through in every part of the tale. It’s well written with believable and flawed characters. My only criticism is that I worked out who the snitch was pretty early in the piece – but I do read a lot of crime fiction.

If you’re fond of the works of Peter Temple, Garry Disher and Jane Harper, you will love Where the Truth Lies by Karina Kilmore.