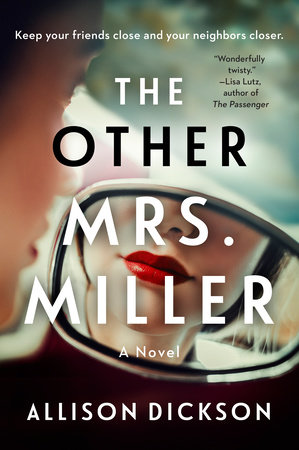 Two women are watching each other.

Phoebe Miller isn’t sure when the rusty car started showing up in the cul-de-sac she calls home, or why its driver would be spying on her. What could be interesting about an unhappy housewife who drowns her sorrows in ice cream and wine and barely leaves her house?

Only one knows why.

When a new family moves in across the street–the exuberant Vicki, who just might become the gossipy best friend Phoebe’s always wanted, and her handsome college-bound son, Jake, who offers companionship of a different variety–Phoebe finds her dull routine infused with the excitement she’s been missing. But with her head turned she’s no longer focused on the woman in the car. And she really should be…

An addictive domestic thriller for fans of The Last Mrs. Parrish and The Couple Next Door, The Other Mrs. Miller serves up a delicious brew of dark secrets and stunning plot twists that will keep you captivated until the very last page.

Phoebe Miller is a woman who appears to have everything. Everything material that is, but her home life is a shambles. Following the death of her father, a public figure and business tycoon of considerable wealth,  it becomes apparent that his personal behaviour was less than exemplary, with many complaints of sexual harassment hitting the press. On the domestic front, Phoebe and her husband are coming to terms (or not) with their irreconcilable differences relating to starting a family. Aside from monitoring the strange courier who seems to spend a lot of time parked in her street,  Phoebe has withdrawn from the world, and taken to drinking in isolation to get through the days. That is until the Napier family and their very striking teenage son move into the house across the street.

The Other Mrs Miller is packed with deeply flawed characters, all battling their personal demons. The female characters, especially the Mrs Millers, are relatable on some levels, and the believability of their thoughts and actions carry the book through to its conclusion. They are difficult to like, but perhaps this is because they are a little too like us.

I have mixed feelings about this book. The author has a beautiful style and there are some wonderful, emotive and thought-provoking sentences throughout the book. The chapters switch between the points of view of Mrs Miller, and unknown narrators, creating an intriguing mystery that keeps you reading.

I enjoyed the story, however, I felt that the second half lacked the consistency of pacing and credibility of the first. The story is a little far-fetched. Having said that, The Other Mrs Miller by Allison Dickson is a fun and thrill packed ride, which will be enjoyed by people who like books/shows like Big Little Lies.