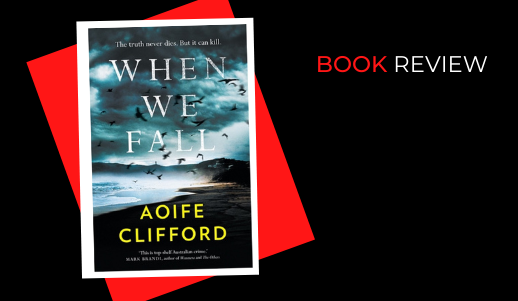 It isn’t strangers you need to worry about here. Blood lines run deep and in unexpected places. Every victim, every accused, we’ll know. The past runs alongside us all the time. Some days it spills into the open.

In the wild, coastal town of Merritt, Alex Tillerson and her mother make a shocking find on the beach. The police claim it’s an accidental death but there are whispers of murder and that it is not the first.

Bella Greggs was found dead at the bottom of a ravine but drowned in salt water. Maxine McFarlane was pulled from the ocean but with no water in her lungs. Black feathers were found with both bodies but what do they mean?

As Alex fights for answers to honour the dead, and to discover why her mother fled town as a teenager, good people keep looking the other way, memories become unreliable and secrets threaten to reveal the past.

Alex discovers the truth never dies but it can kill…

First published in The Age on March 25, 2022 and reproduced with permission.

Murder and dementia: welcome to the latest twist in crime fiction

Crime fiction as a genre has always responded to the big issues of the day, refracted through cleverly crafted stories about the kinds of trouble in which people find themselves in difficult times. But there’s been a shift of late.

While the private eyes and the police detectives are still out there on the urban streets, front and centre now are the inadvertent investigators, the ordinary people from all walks of life who find themselves dealing with a crime that usually begins at home. Even more interesting is the fact that these days, home is more likely to be somewhere on the margins.

While Ned Kelly Award-winning author Garry Disher has written incisively on the characteristics of “rural noir” in Australia, a term he prefers to “outback noir”, two new crime novels – by Australian Aoife Clifford, and New Zealand-based writer Charity Norman – offer a twist on the now familiar trope of the rural, and indeed regional, crime novel. Both feature a daughter coming home to deal with a parent suffering from dementia while featuring a crime in the past that inevitably resurfaces with the prodigal’s return.

The main character in Charity Norman’s Remember Me belongs to “the sandwich generation”.

In Remember Me, book-illustrator Emily Kirkland is summoned home from London by a Maori neighbour, Raewyn, who lives in the adjacent property at the foot of the Ruahine Mountains on New Zealand’s north island. As Emily ruefully informs the reader, she belongs to “the sandwich generation”, caught between parents and children and never quite coping with either.

As Emily patiently deals with her father’s decline, she begins to discover how little she really knew him. This leads to the suspicion that he, and perhaps her brother as well, may have been involved in the disappearance of Raewyn’s daughter Leah 25 years earlier.

When We Fall author Aoife Clifford is a keen observer of people and place. Remember Me begins with a flashback as Leah heads into the local service station to buy chocolate from the young Emily before heading off into the rain-soaked wilderness never to be seen again. The fact that Leah was a brilliant young academic on a quest to discover a rare carnivorous snail only compounds the possible intrigue.

While Leah’s disappearance kick-starts the narrative, it is the beautifully observed account of how Emily and her father deal with the incremental cruelty of dementia that makes Remember Me such a moving and memorable read.

When We Fall also begins with a return. Summoned by her aunt Prue to the fictional seaside town of Merritt somewhere along Victoria’s broken shore, barrister Alex Tillerson has her work cut out with her feisty mother Denny. The 17 jars of raspberry jam sitting in the pantry are only one of the signs that all is not well. But while Denny might appear “diminished like a bird losing its feathers”, she is still full of ferocious energy and would rather go for a walk on the beach than talk about her situation.

On that beach, in sight of the ominous lighthouse that will loom large later, Denny is filled with inappropriate “childish delight” when she discovers a sneaker attached to a severed leg with a feather tattoo. Signs matter in Merritt. Alex snaps into action calling the police who arrive in the form of the substantial Senior Sergeant Kingsley “King” Kelly who will also loom large over the somewhat perfunctory investigation that ensues.

Clifford has always been a keen observer of people and place, and there are some nice descriptions of the intimacies of life in a small town where everyone only thinks they know everyone else. As Kelly warns Alex: “It isn’t strangers you need to worry about here. Bloodlines run deep and in unexpected places.” And so they do.

As the body count rises from one woman to three, and suspects start to proliferate, Merritt begins to rival the county of Midsomer as somewhere you might not want to linger. It’s also a place where the past is inescapable even when it’s in danger of being forgotten. That’s the important lesson here.