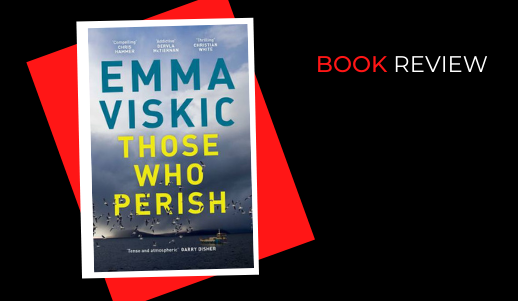 ‘You should be careful, Mr Zelic. Because the person who killed Peter Taylor will almost certainly kill again.’ The detective’s glassy eyes didn’t blink. ‘And you’re already in their sights.’

Deaf PI Caleb Zelic has always been an outsider, estranged from family and friends. But when he receives a message that his brother, Anton, is in danger, Caleb sees it as a chance at redemption.

He tracks Anton down to a small, wind-punished island, where secrets run deep and resentments deeper. When a sniper starts terrorising the isolated community, the brothers must rely on each other like never before. But trust comes at a deadly price …

First published in The Age on April 21, 2022 and reproduced with permission.

There’s a sniper on the foreshore in Resurrection Bay, and Caleb Zelic is hurtling towards the scene in his unreliable Commodore. Caleb has always been an unlikely action hero given that he is deaf, although this has never deterred him. So here he is again impulsively rushing into danger for the fourth time in Emma Viskic’s award-winning series, but with good cause. His brother Anton, for whom he feels a weighty responsibility, is in the direct line of fire. There’s a big family backstory here that adds to the heft of this always compelling series.

For those following the misadventures of Caleb since his first appearance in Resurrection Bay, this scenario will seem somewhat familiar. For a start, Caleb blames himself for his Ant’s fragile mental health and drug dependency. But to be fair, the brothers Zelic just can’t help themselves when it comes to landing in trouble, and Those Who Perish proves no exception to that rule. As always, it’s tightly written in often staccato prose that packs a powerful punch. It’s also elegantly plotted, darkly humorous and occasionally very moving.

Much of the emotional weight has to do with Caleb’s vulnerabilities. As a person who has been deaf since childhood, he is constantly frustrated by a world of “hearies” who don’t know how to enunciate for someone trying to lip-read. Take the bloke with the “mouth like a constipated turtle”. On the other hand, Caleb communicates fluently with both Ant and his partner Kat in the sign language Auslan. Once again the insights into how this works are revelatory. Ant’s sign name, for example, is two hands scrabbling sideways like ants chasing each other.

In Those Who Perish, Caleb has two missions. While the first might involve saving Ant from whatever fine mess he has got himself into this time, the second is to find out who has stolen the local footy club’s mascot. Norman Numbat (or rather his costume) has gone missing. Unfortunately, while this is supposed to make the wearer “look like a cute marsupial”, in Caleb’s opinion, the effect is actually “halfway between a Tassie devil and a coked-up squirrel”. To make matters worse, someone is now taking compromising photos of Norman involving drugs and lewd acts. It’s not a good look for the team.

While Numbatgate percolates entertainingly along in the background, Caleb can’t help but insert himself into his brother’s secret business, which given the presence of a sniper is clearly much more dangerous. This entails following Ant on a vomit-inducing ferry ride to Muttonbird Island where Caleb discovers his brother has signed up for an expensive rehab in a mysterious facility run by the enigmatic Doctor Locke. Even more worrying is the fact that the ubiquitous sniper is also active on the island, thereare bullet holes in the mail-boxes and a dead fox delivered in a box as some kind of ominous warning.

Despite this grim scenario, Viskic has fun with the quirky inhabitants of the island. They include the woman in the hand-knitted cardigan featuring ugly goats whose eyes seem to follow you around the room, and the randy wife of the local shopkeeper who has taken a shine to Caleb who is, we discover, also “hot”. This explains a lot.

Underpinning it all is Caleb’s on-again off-again relationship with Kat, a beautiful and intelligent Indigenous woman who is close to giving birth to their child. Like everyone else, Kat is completely bewildered by Caleb’s need to be in the thick of it, even when it puts everyone he loves in danger. There’s a lot at stake here and Viskic does not disappoint.