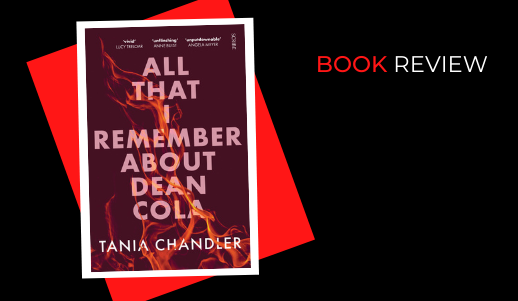 Entry in 2022 The Davitt Awards

The boys from back home stand beside the bed, watching her bleed onto the white sheet. ‘He only said to scare her,’ one of them says.

Sidney is happily married to her firefighter husband and thinking about having a child, but her life has been marred by psychotic breakdowns. Haunted by memories of Dean Cola — the teenage crush who is an essential piece of the puzzle that is her past — she returns to the town where she grew up. Something unthinkable happened there, but is she strong enough to face it?

A compelling portrait of mental illness, memory, and the ways that the years when we ‘come of age’ can be twisted into trauma.

Tania Chandler’s story of old crimes crawling out into the light begins with adult protagonist, Sidney, rediscovering an old school art textbook in a packing box and the poem she’d written as a teenager folded inside its pages. The box also contains her 1989 diary, written curiously in the third person, the last entry noting that she is going to a party with her crush, Dean Cola. Sidney studies the poem and the diary entries and she tries to remember what Dean looked like, but she knows her meds are muddying the waters.

Sidney clearly has a troubled history. She wears pressure bandages over her long-ago burned hands, sees a therapist and takes medication to manage her mental health disorders. She also secretly takes the Pill, though she and her attentive husband/carer Christos (a firefighter) are meant to be trying for a baby.

Disturbed by this memory of Dean Cola, which she can’t quite grasp, and haunted by snippets of other memories that never coalesce, Sidney tries to assemble the fragments of her memory – and to do that, she goes off her meds.

Before long, the “I” of the narrative is displaced by the disassociative “she” of the diaries. Sidney’s home life and work life become less lucid as she stumbles toward the past – the time and place where she burned her hands, where frightening snatches of dialogue break through to the surface, and Dean Cola’s name is a sinister mantra.

With memory playing tricks, revealing only enough to be alarming, present Sidney returns to her late mother’s house seeking her second, missing diary. We also watch as 16-year-old Sidney navigates school, family, boys, parties, and the onset of her first psychotic breakdown.

All That I Remember About Dean Cola is mesmerising and chilling. It’s also intriguingly topsy-turvy, beginning with small fragmented chapters that become slowly more cohesive as Sidney gives up her chemically assisted “sanity” to allow her illness and the voices in her head guide her towards the truth.

Inexorably, the past is revealed in all its abusive horror. The unvarnished portrayal of it can make for hard reading, but that same eyes-open gaze is also part of why it works. There is no painting over this truth, or presenting it in a softer light. But a naked truth is necessary to free Sidney from this awful past.

Tania Chandler gives us a compassionate portrayal of Sidney’s mental illness while keeping the atmosphere tense about what Sidney may have done or experienced. The narrative is often deeply uncomfortable, but the unfolding story also lights a path for Sidney’s future. It’s a gripping novel and a brilliant achievement.