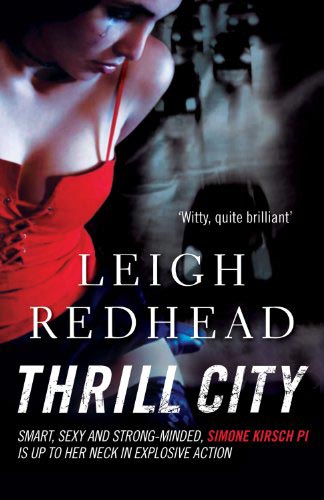 Author: Leigh Redhead
Publisher: Allen & Unwin
Copyright Year: 2010
ISBN: 978-1-74114-737-7
No of Pages: 438
Review By: Karen Chisholm
Book Synopsis: Simone Kirsch, ex-stripper, sleuth and bad girl, is back in business – and before she has time to crack open a bottle of cheap champagne to celebrate the launch of her very own detective agency, she’s up to her neck in lethal fun and games.

It all starts off quite innocently, when bestselling crime novelist Nick Austin wants to follow her around for a few days as background research for his next novel.

THRILL CITY has arrived. The fourth Simone Kirsch book from Australian writer Leigh Redhead has been much anticipated by fans of this fantastic, Melbourne-based, stripper turned Private Investigator series.

Mind you, it’s not just Simone that I was pleased to see back, but Chloe, Sean, Alex, Curtis, all the other strippers, the bars and the way that the streetscape comes alive. When bestselling crime author Nick Austin pays Simone to let him follow her on a few jobs – to get the feel of how a female PI works – that leads to a writers festival, a crime panel, a couple of well known “names” as no-shows and a confrontation between Nick, his ex-wife Isabella and the man she left Nick for – thriller writer and all-round action man type Rod Thurlow. Later, when Simone stumbles over Isabella’s body, murdered in Nick’s house where he is passed out upstairs, drunk, things become very very personal.

All the elements that fans of this series have come to expect are here. Chloe’s pregnant, fabulous, and happily running her business providing strippers. Sean’s back from Vietnam, gorgeous and very supportive. Alex is newly married, lurking on the edge of Simone’s tempted eyeline, creating even more tension in her life. And if there’s one thing that Simone doesn’t need it’s more tension in her life. Still vaguely chaotic, hanging onto her PI licence by the very tip of her fingernails, things are getting increasingly complicated. As if finding a dead body; losing a suspect; dealing with personal death threats and investigating where she is most definitely not welcome isn’t enough, she’s also trying to decide if she wants to move to Vietnam with Sean; decide if she’s even got a long-term future with Sean at all and then there’s Chloe’s impending motherhood. Simone’s extremely stressed out.

Added to the expected elements, however, there’s also a sense that Redhead is really starting to hit her mark in this storytelling game. There is a sense of fun, a slightly tongue-in-cheek sense of humour, as well as the titillation and sheer entertainment from all the other books in THRILL CITY. What’s particularly pleasing though is a more fully rounded, dare I say, confident and complicated (without being complex) plot in the mix as well. There is still a bit of rushing around, and don’t be put off by the occasional feeling of impending fem-jep. Simone is never really in jeopardy, just temporarily short of a solution.

If you’re not already aware of the Simone Kirsch series, then you could pick it up from THRILL CITY. There is the occasional back reference to events in CHERRY PIE, but not enough to throw a new reader to the series. And the best part of that is if you love THRILL CITY as much as I did, then you’re very very lucky. There are 3 earlier books for you to track down. The rest of us are now patiently waiting for the next instalment. We fans don’t really want much do we!