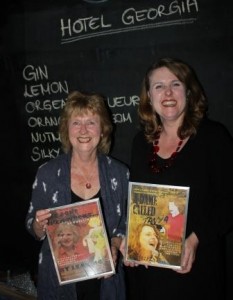 Sisters, I hate to start with a quote from a male crime author, even if it is by Raymond Chandler, but here it is:

“If in doubt, have two guys come through the door with guns.”

In the case of Sisters in Crime, it was more a case of: “If in doubt, have two King women come through the door with pens.”

Phyllis King and Tanya King (as she then was) came through the door of St Kilda Town Hall as volunteers for SheKilda 2001, as I recall, on the Thursday night before the grand opening the following night.

It was the usual chaos. They soon showed their mettle and we wasted no time in snaffling them as convenors. For a time, some of us referred to Phyllis and Tanya as the ‘King Women’ but we should have called them ‘Queens – Queens of Crime’.

It was our first – and so far only – mother-daughter pairing amongst the convenors and it’s been to our great benefit as while they share core beliefs, not to mention a passion for crime, their talents are multifarious.

Phyllis brought her great organisational know-how to the Scarlet Stiletto Awards, liaising with all the talent, organising the prize presentation, giving the judges’ report and much much more. She then took charge of the Davitt ticketing – both exacting jobs though not without their compensations. We know Phyllis loved being the bearer of good news to the aspiring authors on the Scarlet Stiletto Awards shortlist.

Tanya became a Davitt judge and then, since 2010, the judges’ wrangler. Tanya reformed the judging process. Her reports have always been insightful and highlights of the Davitt Awards ceremony.

Tanya has also been a top event host and we hope that she will still consider taking the odd turn.

Both Phyllis and Tanya have brought their considerable intellects to bear on crime writing itself – through their contributions to different judging processes, their reviews and in general discussion. They also exhibited flexibility in their critical processes.

Phyllis always professed a loathing for stories with ‘woo woo’, or as Cathy Martin, used to call it, ‘oomby-goomby’, so imagine our surprise when she nominated a vampire story at one Scarlet Stiletto Awards judging and, from memory, I think it won a prize.

We’re already missing both Phyllis and Tanya heaps. They are both welcome to join in the Scarlet Stiletto Award judging.

We hope they won’t be strangers or we may have to resort to coming around with menaces.

Three cheers for the King Women, our Queens of Crime!