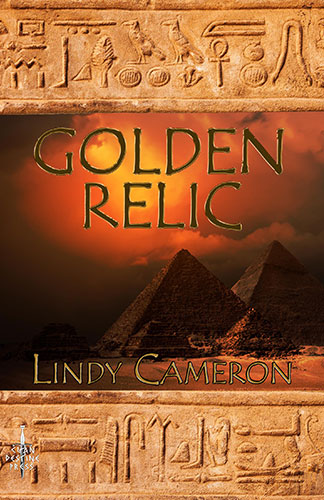 When local Crime and True Crime Author Lindy Cameron decided to re-release GOLDEN RELIC as an ebook I was very very pleased (DISCLAIMER – I did the conversion of the manuscript into the ePUB file). I remember the story of STOLEN PROPERTY (as it was originally titled) when it was released on the website of the International Council of Museums (ICOM) ’98 website and I was lucky enough to get a copy of the paperback GOLDEN RELIC when it was released (which I’ve still got!). I do like to go back and re-read books, and I simply don’t get that opportunity that often these days. One of the things that intrigued me the most about re-reading GOLDEN RELIC was to see how it stood the test of time, particularly as the story was originally released on the Internet, in the very very early days of the Internet. Yes there was a time when wireless / broadband access from anywhere wasn’t even contemplated, so much was still text-based (and I don’t mean SMS), and the idea of using a website to release a murder mystery was, well unheard of.

GOLDEN RELIC, is a story built in and around the world of Museums, collections, artefacts and strange goings on. When Professor Lloyd Marsden is murdered in the Museum of Victoria, Special Detective Sam Diamond is given the case. Her photographic memory and passion for cryptic crosswords definitely help in the investigation, but then so does archaeologist Maggie Tremaine who not only knows all about the internal machinations of Museums, she can help get Sam from Melbourne to Egypt and Peru as they search for a legendary relic.

Given that this is a book that was released originally on the very new-fangled Internet the author has pulled off a very delicate balancing act in the use of technology. One of the things that instantly ages a book dramatically is the overt use of (or not) of elements that we take for granted these days – mobile telephones, GPS, Internet databases and search engines. Whilst GOLDEN RELIC refers in general terms to searching for information on the Internet and so on, it’s very general, it’s not intrinsic to the story, and the reader can just roll through it without instantly being made aware that this is a story from a past era (seems strange to be calling 1998 a past era – but it definitely is).

Aside from the gotchas of technology and timing, the main point of a mystery story like GOLDEN RELIC has to be the mystery itself. This really is a good, fun read. Woven into the goings on in a Museum sense, the search for answers remains the focus of the book. That’s not to say that you won’t learn quite a bit about Museum roles in the preservation of artefacts and knowledge; the tensions between Indigenous cultures the world over and the holders of “repatriated” collections; and the very human conflicts between staff and colleagues. There’s no obvious pushing of any particular barrows though, so the novel reads ultimately as an entertainment, and the lightness of the banter between Sam, her own police colleagues, Maggie and her museum colleagues, and the sense of good, old-fashioned friendship between Sam and Maggie is really very good. As is the relationship between Sam and her sister, and Maggie and her romantic pursuit of Sam’s colleague.

All in all, this is still a really good story, told with a lightness of touch that’s very engaging and refreshingly Australian. It’s a pity that Sam and Maggie have only had the one outing thus far – they would be a tremendous crime-fighting duo, sort of the Australian Rosemary and Thyme, with just the slightest larrikin streak.