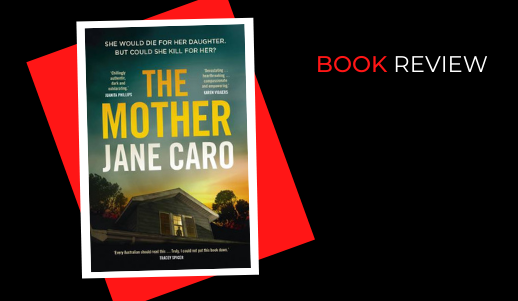 Just like the garden, the fuse box, the bills, bin night and blown light bulbs, this was just something else she’d now have to take care of herself.

Recently widowed, Miriam Duffy is a respectable North Shore real estate agent and devoted mother and grandmother. She was thrilled when her younger daughter Ally married her true love, but as time goes by Miriam wonders whether all is well with Ally, as she moves to the country and gradually withdraws, finding excuses every time Miriam offers to visit. Their relationship has always had its ups and downs, and Miriam tries to give her daughter the distance she so clearly wants. But is all as it seems?

When the truth of her daughter’s situation is revealed, Miriam watches in disbelief as Ally and her children find themselves increasingly vulnerable and cut off from the world. As the situation escalates and the law proves incapable of protecting them, Miriam is faced with an unthinkable decision. But she will do anything for the people she loves most in the world. Wouldn’t you?

First published in The Age on March 11, 2022 and reproduced with permission

It’s not just the young who have had enough of toxic masculinity. Hot on the heels of Debra Oswald’s The Good Doctor published last year comes Jane Caro’s The Mother, in which another successful older woman will decide enough is enough and take the law into her own hands. This is hardly surprising given the powers that be have so spectacularly failed the people she loves. There’s a new vigilante in town, and she’s tougher than she looks.

Jane Caro’s novel is as forthright as we have come to expect from a media personality who has always spoken truth to power as a journalist, podcaster and now crime writer. It may be fiction, but The Mother is rooted in a reality with which we are sadly familiar. In her afterword, Caro acknowledges her indebtedness to fellow journalist Jess Hill, whose devastating analysis of domestic abuse, See What You Made Me Do, won the Stella Prize in 2020.

Ominously, the prologue presents us with Miriam in a gun shop in Wollongong buying a Smith & Wesson nine-millimetre firearm. Apparently, south coast New South Wales is the place to go when you don’t want to be recognised. She’s done the training, filled out the paperwork, and is to all intents and purposes a law-abiding citizen and sporting shooter. But that’s not all.

First and foremost, Miriam is a mother who is concerned about the welfare of her two daughters, in particular the needy Allison who we first meet on the eve of her wedding to Nick, the handsome vet. At this stage, all that’s bothering Miriam is the fact that her daughter plans to change her name and the potential cost of the wedding.

But then things start to go wrong. Miriam’s adored husband Pete dies of a sudden aneurysm. The awkwardness of the funeral and Miriam’s mixed emotions as she struggles with her loss and her new status as a middle-aged widow ring painfully true – “only dessert and alcohol comforted her now”. But she’s determined to get back to her business as a real estate agent, even if it does mean doing up her skirt with a safety pin. Miriam doesn’t give up easily.

And then there’s Allison’s exciting news. She’s pregnant, but oddly reluctant to have her mother visit her in Dungog, the regional town in which she lives. The undeterred Miriam won’t be put off and books an Airbnb. But from here on, it’s a game of cat and mouse as the pregnancy, and what comes next, proceeds.

While Allison tries to keep her mother at arm’s length, Miriam becomes increasingly suspicious that all is not well. Caro takes her time here, allowing Miriam to oscillate between self-doubt and frustration. There’s a lot of ruminating going on.

There’s also an unbearable inevitability about what will follow, and it’s agonising to read. Indeed, I started to speed up as I yearned, like Miriam, for a resolution to the uncertainty. But be careful what you wish for. The second half is even more unsettling as it becomes apparent that the perpetrators of coercive control can outrun and outlast any attempts to legally constrain them.

And that’s the heft of The Mother, a book that goes beneath the surface to explore in ways that only fiction can the depth and complexity of domestic abuse and its emotional impact on families. It’s also a shocking indictment of a legal system that fails to protect the most vulnerable when they are most in need. Read it, be angry and then campaign for change. Just don’t go buying a gun in Wollongong.