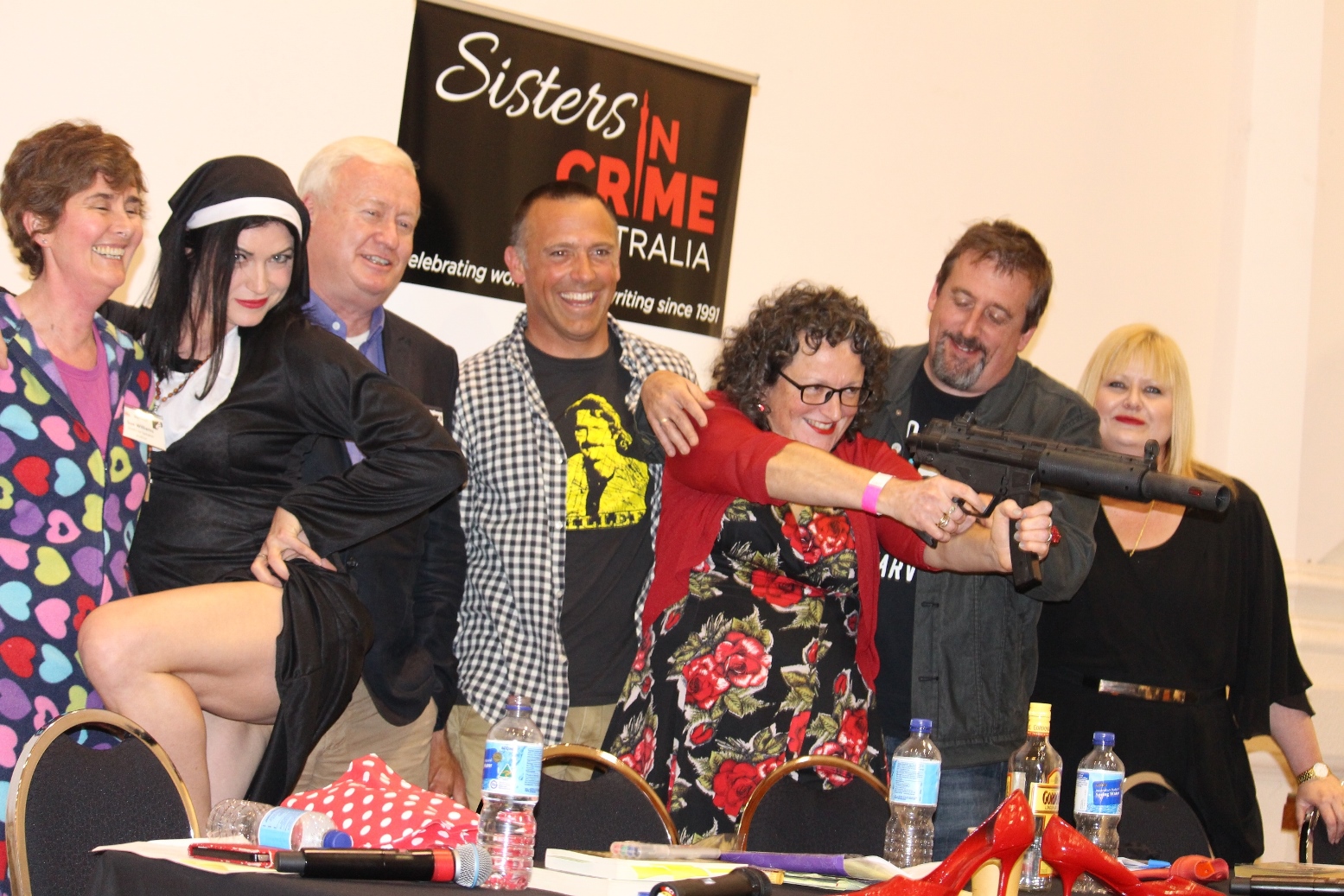 Sisters in Crime Australia is about to celebrate, somewhat belatedly, its 30th birthday on Saturday 23 April.

The party is its first live event in two years and will be held at St Kilda’s fabulous new Victorian Pride Centre.

Jane Clifton will lead the crowd in singing “Sisters Are Writing It for Themselves” (words by novelist Angela Savage and short-story doyen, Cate Kennedy).

“It sounds like we’re a group of women dedicated to robbing banks but we’re just a well-behaved literary society dedicated to crime – and lots of it – on the page and screen. If it weren’t for this outlet, a lot of Australian men might have cause to be nervous,” says Carmel Shute, a co-founder, and a continuing national convenor since 1991.

“Sisters in Crime Australia took its inspiration from the American organisation founded by crime writer, Sara Paretsky, in 1986 at the Bouchercon, the premier US crime writers’ convention. She, and other women, rightly pointed out that women weren’t getting a fair deal when it came to getting published, promoted, and reviewed.”

Shute said that in the eighties she and other crime readers were swept away by the explosion in women’s crime writing driven by Paretsky, Sue Grafton, and Val McDermid and, in Australia by Kerry Greenwood and her now world-famous Miss Fisher Murder Mystery series.

“Sisters in Crime’s origins were rather accidental. During a visit to North America, I decided to interview five women crime writers and produced a program for RN’s Coming Out Show, which went to air on Easter Friday, 1991. Luckily, back then, you didn’t have to be a professional broadcaster to put a show to air. I was actually the ABC union organiser in Melbourne. During the program, we offered a free feminist crime book bibliography – which naturally I hadn’t done – and the ABC was inundated with letters and phone calls (it was pre-internet),” she said.

“It was enough to inspire a group of passionate women crime readers in Melbourne, and on 22 September 1991, we launched our fledgling organisation at the Melbourne Feminist Book Fortnight with a debate entitled ‘Feminist Crime Fiction: Confronting the Hard-boiled Head On’. Greenwood was one of the stars,” she said.

From that unlikely beginning, Sisters in Crime Australia has grown to an organization of 500 members – and 3500 followers – with chapters in Brisbane, Sydney, Adelaide, Perth, and Melbourne, which runs a very busy calendar of events.

Pre-Covid, the Melbourne Chapter held live events most months, featuring authors from all over Australia, or overseas. For the past two years, it has Zoomed events, attracting a national and increasingly international audience.

Since 1991, Sisters in Crime has partnered with a huge number of organisations to present events, including libraries, bookshops, literary festivals, universities, the NGV, the Melbourne Museum, the Police Museum, the Victorian Institute of Forensic Medicine, the National Trust, and the RN Quiz Show.

“In 1994, over a few glasses of wine, we came up with the idea of the Scarlet Stiletto Awards short story competition, to unearth the talent we knew was there. It was in the grand tradition of crime writing awards, such as the Golden Dagger in the UK, and we’ve loved the way the name combines the femininity of the stiletto shoe with the deadly efficiency of the stiletto blade, and the sauciness of scarlet women,” she said.

Over the lifetime of the awards, 4137 stories have been entered with 31 Scarlet Stiletto trophy and category winners going on to have crime books published. It has been a springboard for the literary careers of Kennedy, Savage, Tara Moss, and Aoife Clifford, amongst others. Click here for more info.

In 2001, at SheKilda, the 10th anniversary convention held at St Kilda Town Hall, Sisters in Crime set up the Davitt Awards to provide some much needed – and overdue – recognition for Australian women crime writers. At that stage, women barely got a look in with the Ned Kelly Awards for crime writing. In 2001, only seven books were in contention though the awards then didn’t extend to true crime/non-fiction. This year there are more than 160 books before the judges. (For info, go here and here.)

Shute said that Sisters in Crime doesn’t receive organisational funding and had had its fair share of challenges.

“But our byword has always been fun. We are hanging out for a live event where we can truly celebrate our achievements over three decades. Zoom doesn’t do it when it comes to eating, drinking, and being merry,” she said.

“And we’re thrilled to be celebrating our 30th birthday in Fitzroy Street, just up the road from Leo’s Spaghetti Bar where we met for 16 years in the backroom, just past the men’s toilets.”

Australian women’s crime books are now receiving international recognition, winning awards such as the Gold Dagger (Jane Harper) and the Barry Awards (Jane Harper twice, Dervla McTiernan), and are increasingly making it to the screen e.g.

The crime fans attending the 30th-anniversary bash are invited to bring out the pearls – the pearl being the traditional 30th-anniversary gift. The pearl symbolises purity, honesty, and wisdom (not all of which necessarily apply to Sisters in Crime members). There is a prize for the best Pearly Queen or King.