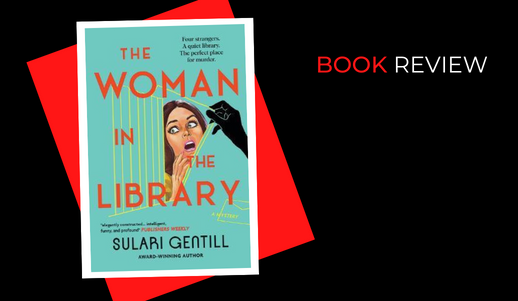 Hannah Tigone, bestselling Australian crime author, is crafting a new novel that begins in the Boston Public Library: four strangers; Winifred, Cain, Marigold and Whit are sitting at the same table when a bloodcurdling scream breaks the silence. A woman has been murdered. They are all suspects, and, as it turns out, each character has their own secrets and motivations – and one of them is a murderer.

While crafting this new thriller, Hannah shares each chapter with her biggest fan and aspirational novelist, Leo. But Leo seems to know a lot about violence, motive, and how exactly to kill someone. Perhaps he is not all that he seems…

First published in The Age on 29 July 2022 and reproduced with permission.

There’s a discussion familiar to crime writers in The Woman in the Library. Australian recipient of the prestigious (fictional) Sinclair Scholarship, Winifred (“people call me Freddie”) Kincaid admits that she is a “pantser”. In other words, an author who flies “by the seat of their pants” when it comes to devising an intriguing plot.

In fact, Freddie thinks of herself as more of a bus driver when it comes to plotting: “there’s a route of sorts, but who hops on and who gets off is determined by the balance of habit and timing and random chance.” The Handsome Man to whom she is explaining her approach is also a writer, but a meticulous planner who has devised an intricate flowchart with radiating themes and subplots: “it’s like a spider’s web spun to catch a story,” Freddie reflects appreciatively.

Whichever Sulari Gentill herself may be, a plotter or a pantser, The Woman in the Library is both a compelling narrative trip and a complex web that captures the heart as well as the head. This is a book about writing fiction that plays with the form of the classic crime novel while also involving a love story, a serial killer, and a nod towards that 18th-century favourite, the epistolary novel.

It begins with an email from Leo (an aspiring American author) to Hannah (a successful Australian crime writer) describing how he has spent the day being distracted by the magnificent ceiling in the reading room of the Boston Public Library. In chapter one we meet Hannah’s character Freddie sitting in that same library admiring the ceiling while quietly observing the people sitting around her. They include the Handsome Man, Freud Girl and Heroic Chin, all of whom will eventually receive names.

Freddie’s contemplation of the ceiling is interrupted by a terrifying, “ragged” scream that initiates a conversation between the four which will develop into an alliance as a body is discovered and everyone becomes a suspect. And so the novel within the novel begins to unfold, much to the delight of fan Leo, who recognises his own contribution to Hannah’s library scenario.

Leo is eager to be of help, offering critique and advice about American culture and idioms. “Americans don’t use the term ‘jumper’ … you may want to switch that reference to sweater or pullover,” he writes. He’s also happy to suggest which Boston district Freddie might live in, the best bus route to get from A to B, at the same time as he notes the progress of his own doomed manuscript: “Yours somewhat despondently,” he closes.

This is the set-up for a layer cake of a plot that affords Gentill umpteen opportunities for commentary on the cultural differences between Australia and the US. “Christmas in Australia is sometimes an exercise in irony,” Freddie explains as the bushfires rage at home. She’s also intrigued by the way Americans smile while they talk. Australians, she reflects, only smile when they are lying.

The Woman in the Library is replete with wry observations, although like Leo I really wanted to know what Freddie looks like. But then we never meet Hannah either since we don’t get to read her responses to Leo. Craftily pulling the strings of both is the real author herself, Sulari Gentill, who proves once again that she is a true master of the genre. The Woman in the Library is a beguiling murder mystery nestled within an epistolary crime novel wrapped up as a metafiction – and it’s a delight.