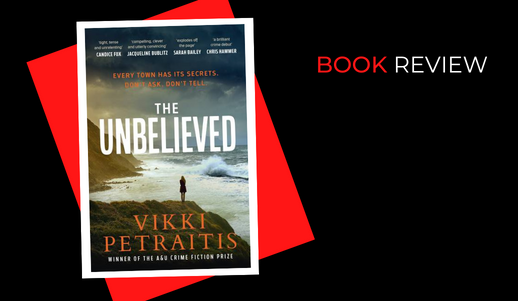 ‘So you believed the alleged rapists over the alleged victim?’ Jane’s voice took on an indignant pitch. ‘Girls lie sometimes.’ I nodded. ‘And rapists lie all the time.’

When Senior Detective Antigone Pollard moves to the coastal town of Deception Bay, she is still in shock and grief. Back in Melbourne, one of her cases had gone catastrophically wrong, and to escape the guilt and the haunting memories, she’d requested a transfer to the quiet town she’d grown up in.

But there are some things you can’t run from. A month into her new life, she is targeted by a would-be rapist at the pub, and realises why there have been no convictions following a spate of similar sexual attacks in the surrounding district. The male witnesses in the pub back her attacker and even her boss doesn’t believe her.

Hers is the first reported case in Deception Bay, but soon there are more. As Antigone searches for answers, she encounters a wall of silence in the town built of secrets and denial and fear. The women of Deception Bay are scared and the law is not on their side. The nightmare has followed her home.

What can Vikki Petraitis not do! Over thirty years, she has produced a formidable body of true crime books including best-seller The Frankston Murders about serial killer Paul Denyer, and The Phillip Island Murder which has been featured in several TV shows and podcasts. Her podcast series with Casefile Presents has been downloaded over three million times. And now her first crime fiction book The Unbelieved is winner of the inaugural Allen & Unwin crime fiction prize – and rightly so.

Petraitis has created a wonderful characters in Antigone Pollard: a kick-arse copper determined to help the terrified women of a small town kick down the walls of deceit, male privilege and patriarchy. The Unbelieved is a must read: gripping to the last page.

A little bird told me a sequel is on its way – the sooner the better.

Entertaining from start to finish

Senior Detective Antigone Pollard, disheartened by the failure of the justice system to support a victim of sexual assault, has left Melbourne and transferred to the station in her hometown of Deception Bay. She has barely started her new role when she becomes the target of a sexual predator, who attempts to spike her drink at a local bar.

Pollard, with the assistance of her partner Wozza, uncovers similarities between hers and an alarming number of sexual assaults in the district. The bulk of the cases have received minimal police attention as the victims have not been believed. The blame has been firmly placed on the victims; being either too drunk, provocative or deliberately lying to cover up their own disgraceful behaviour and embarrassment. Pollard is forced to operate without the support of her immediate supervisor, and her investigation is dogged by the resentment of many senior male residents of the town. Sadly, it takes the assault of one of the daughters of a prominent member of the community, to spark real interest in the case.

Antigone is a strong and amazingly resilient character. Her disappointment, pain and fear are beautifully expressed. She finds the strength to carry on, despite the obstacles, through her belief in justice, the support of her friend and former supervisor, her need to support and nurture the women of the wider community, and most importantly, the love of her dog, Waffles. She is also trying to adjust to a single life, having ending her long-term relationship with a former colleague, Daniel, who failed to understand and support her dedication to the cause of a victim. It is wonderful to take this journey with a realistically flawed woman.

But it is not just Antigone, all of the characters are believable, some likeable and many relatable. I suspect that many readers will have met and been on the receiving end of the unwelcome sexual attention, snide remarks, and general disdain of insecure, small-minded men in their careers and/or lives. Each character, good, bad, and in-between adds realistic colour to the narrative.

The regional, coastal down is described brilliantly. You can feel, smell and hear the sounds of the bay, the atmosphere of the local drinking establishments and the remoteness of the residential locations.

This gripping crime novel will keep you reading. The plot flows and twists at a rapid pace. You won’t want to put this one down. Petraitis’s experience as a true crime author adds an easy feeling of reality to the story. The descriptions of some members of the Police Force’s responses to reports of sexual assault, domestic violence, and general attitudes to women on the Force, ring true and smack of real-life accounts. The depth of feeling expressed in the writing shocks, upsets and engages the reader.

To say that The Unbelieved by Vikki Petraitis is an amazing debut fiction crime novel is an understatement. If you enjoy rural noir, and authors like Emma Viskic, Jane Harper, Garry Disher and Karina Kilmore, you will love The Unbelieved. I hope this will be the first of many novels from this author.