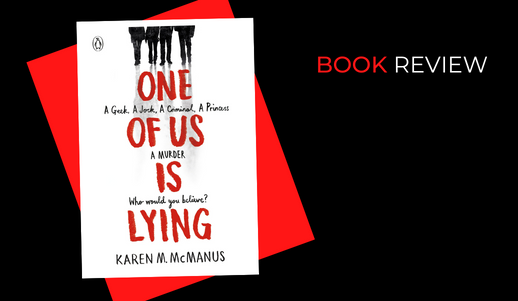 Sports star Cooper only knows what he’s doing in the baseball diamond.

Bad boy Nate is one misstep away from a life of crime.

Prom queen Addy is holding together the cracks in her perfect life.

And outsider Simon, creator of the notorious gossip app at Bayview High, won’t ever talk about any of them again.

He dies 24 hours before he could post their deepest secrets online. Investigators conclude it’s no accident. All of them are suspects.

Everyone has secrets, right?

What really matters is how far you’ll go to protect them.

This is the sort of book that you wish you could clear the rest of your day so you could romp through uninterrupted. One of Us is Lying may be a YA novel, but as someone who is (ahem) considerably older it was a fast paced, engaging, thoroughly enjoyable page-turner with lots of unexpected twists and turns to keep you hooked. The central premise is that five 17-year-old students go into detention but only four come out alive. This is no spoiler as it happens in the first few pages. It’s also quickly revealed what killed them and you have to follow the clues to find out why and how and who actually did it. Here’s a tip: pay attention to the name at the top of each chapter, because each is in the first person of one of those four unlucky students. That’s quite fun as you flip from one head to another and you get to experience a scene in one person’s perspective and then have it retold by another (and through their filters, which reminds me why I’m so glad not to be a teen any more). By around the middle of the book any seasoned crime reader will have likely worked out the ‘who-dun-it’ or at least be suspicious, but that doesn’t spoil anything. There’s lots of teen angst about not being good enough and what you look like and the crazy pressures teens are under as well as lots of vignettes of American high school life with friends falling in and out of friendship and bitchy gossiping. For parents looking for strong role models for the books their kids read, then yes the teen girls have agency and all the brains aren’t male. The brainiest is one of the teen girls who is hoping for Yale. Watch the character arc for the homecoming queen teen which is particularly poignant. In terms of ‘adult content’, yes the kids are all having sex and this is considered par for the course, but the bedroom door is firmly closed and the most that is written is steamy kissing. Talking of which, there’s quite a sub plot of romance, and whilst this book is recommended for 14 years and older that’s might be a bit young for the angsty-ness of the romance elements.