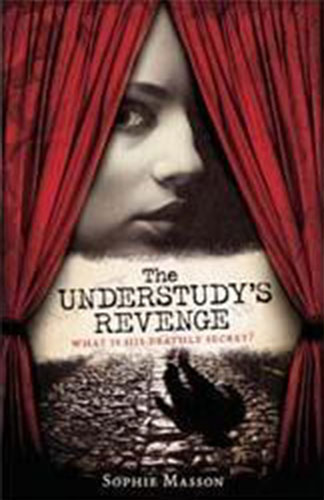 As the title suggests, this book for young adults is set in the world of the theatre. Millie Osborne, the heroine, is the daughter of the general manager of King’s Company which is busy rehearsing a production of Hamlet. We are in nineteenth century London and Millie is an active member of the company. She is the general dogsbody and as such is involved in performing numerous tasks including taking messages. In such a role she is well used to travelling round London on her own and accomplishing difficult tasks on her own.
When the mysterious Oliver Parry walks into the Company’s rehearsal rooms to audition, Millie is curious. At first she does not think he is an actor for he does not seem the type. She begins to wonder why he is so secretive. And why is he so interested in their Company?
James and Lily King, the owners of King’s Company, return from their honeymoon. James has just married his late brother’s widow. When they meet Oliver, Millie sees their reaction and begins to wonder if he is the long lost son of Lily’s first marriage. Is there to be a real life version of the Hamlet story played out before them all?
She senses all is not well, and with the help of her friend and admirer, Seth, she follows Oliver round London. This leads her to attend a séance, and later to a dramatic chase across the town. As they investigate, they uncover a tale of secret identities, betrayal, lies, revenge and perhaps even murder
Seth works as a messenger in the offices of the literary magazine, All the Year Round, and while waiting for him there Millie makes the acquaintance of two of its writers, Mr. Charles Dickens and Mr. Wilkie Collins. This adds much to the atmosphere of the book.
Review by Sue Bursztynski
This is set in the London of Charles Dickens, who was editing a magazine, All The Year Round, at this time and has a walk-on in one scene where the heroine visits the magazine’s offices.
Millie Osborne is the daughter of a theatre manager. The theatre has been her life, but her real ambition is to become a writer and journalist. Now, with the arrival of mysterious Oliver Parry, an actor auditioning for a production of Hamlet, she sees a story in the making, but also finds that there is a mystery in the life of the company’s leading actors and owners, James and Lily King, who married soon after the death of James’s overbearing brother Robert. Lily had lost a son, but is he really dead? And if he isn’t, is there a real-life Hamlet story happening under Millie’s nose, with the danger of a similar ending? Millie and her friend Seth, a courier for Charles Dickens, are determined to find out before a new tragedy can happen.
The novel brings Victorian London to life, with all the dirt and noise and the Victorian passion for seances. Some of it is seen from Seth’s viewpoint, when Millie has been knocked unconscious (but apparently has escaped concussion). Seth is a likeable character who can improvise when in trouble. Millie is also a strong, brave character. It is easy enough to believe she might make it as an investigative writer. There is a touch of fantasy here, but otherwise it’s just good historical fiction with a mystery involved and clues that can be put together.
I have enjoyed Sophie Masson’s historical fantasy before and I was not disappointed in this one.
Recommended.