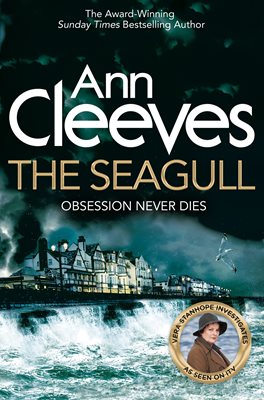 The Seagull is Ann Cleeves’ searing eighth novel in the Vera Stanhope series, about corruption deep in the heart of a community, and about fragile, and fracturing, family relationships.

A visit to her local prison brings DI Vera Stanthorpe face to face with an old enemy: former detective superintendent, and now inmate, John Brace. Brace was convicted of corruption and involvement in the death of a gamekeeper – and Vera played a part in his downfall.

Brace promises Vera information about the disappearance of Robbie Marshall, a notorious wheeler-dealer, if she will look out for his daughter and grandchildren. He tells her that Marshall is dead, his body buried close to St Mary’s Island in Whitley Bay. However when a search team investigates, officers find not one skeleton, but two.

The cold case takes Vera back in time, and very close to home, as Brace and Marshall, along with a mysterious stranger known only as ‘The Prof’, were close friends of Hector, her father. Together they were ‘the Gang of Four’, and Hector has been one of the last people to see Marshall alive. Vera must confront her prejudices and unwanted memories to dig out the truth, as the past begins to collide dangerously with the present.

It seems I may be the only person among my group of friends who had never heard of Vera. Even those who don’t read books are aware of the TV show, which stars Brenda Blethyn as DI Vera Stanthorpe, and has been running for several series.

I opened The Seagull with no expectations and it was a pleasant surprise to meet Vera Stanthorpe. She’s a woman in her 50s, overweight with a preference for tent dresses and velcroed sandals. Vera lives alone, in a house in the hills, is a bit of a maverick and has hippies for neighbours. And eating habits that include a preference for icecream and chocolate digestives. What a brilliant character.

I was enchanted by Ann Cleeve’s storytelling. The Seagull contains a complex plot, ambitious. From the moment Vera walked into the prison and talked to her former colleague, John Brace, it was obvious I would need to pay attention. He wanted Vera to look in on his daughter and her kids and in return he would tell her where the body of one of his friends could be found. But his daughter was relatively new in his life. She was born to the drug-addicted sex worker he was seeing behind his wife’s back, then adopted out at birth. And his dead friend? He was part of a Gang of Four, a group that included Vera’s father.

Confused? Don’t be. The slow and steady build of inter-relationships and the gentle movement of the jigsaw pieces of this story are so beautifully written by Cleeves that the story is easy to follow.

The themes explored in The Seagull are of family and friendship, especially family and what it means when the accepted notions of family are tested. Cleeves also explores adoption, drug addiction, corruption and the cost of keeping secrets. I was fascinated, too, that the crime that bonded the Gang of Four was stealing exotic bird eggs. It’s too easy for authors to imagine the obvious crimes: drug smuggling, people trafficking and cybercrime. It fit the characters, and the setting, that these crimes were different.

The story is set in Whitely Bay and throughout the entire book Cleeves evokes an almost magical sense of place. It’s atmospheric, a little mystical and even away from the big cities, is subject to the dreams of big developers.

Whether you’re already a fan of Ann Cleeves or not I highly recommend The Seagull.