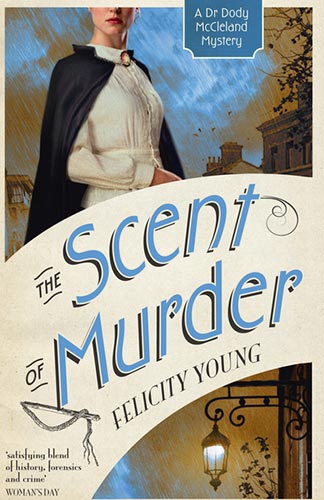 Author: Felicity Young
Publisher: Harper Collins
ISBN: 978 0 7322 9802 9
Review By: Lesley Vick
Book Synopsis: The Scent of Murder, the third book in the historical mystery series involving autopsy surgeon Dr Dody McClelland, is a fascinating exploration of the period as well as a very satisfying crime plot. Set in the time of the suffragist movement there is a significant amount of period and forensic research behind the writing but the information is skilfully woven into the story and never seems didactic. Inequalities of power, class and gender all play a part in both the commission of the crimes and solving them.

medical realities of the time are not glossed over either and one tragic death occurs because of them. The circumstances in which women of the day found themselves – especially the vulnerable children in the workhouses – were terrible and even educated professional women like Dody were at risk.

Author Felicity Young does not make the mistake of casting all men as bad and Dody’s (secret) lover, CI Matthew Pike, is also her respectful and supportive work colleague. Dody somewhat reluctantly has to chaperone her sister Florence, an activist in the suffragist movement, at the country house of Sir Desmond Fitzgibbon, the misogynist uncle of Florence’s suitor, Tristram. The latter’s archeological aspirations lead to the discovery of bones which turn out to be both recent and the subject of foul play. Once Dody discloses this the situation become dangerous for several people, including Dody herself.

The investigation uncovers links to the local workhouse. Rather depressingly, the sort of arrogant, cruel adults abusing the children at the workhouse over 100 years ago are similar to those today, as we are seeing in Royal Commissions investigating abuse of power. Domestic violence and sexual assault are also explored. Dody’s courageous pursuit of the truth, assisted by Matthew Pike, succeeds in the end. She is a really impressive character, the book is extremely well written and there is much of interest to learn through the story.