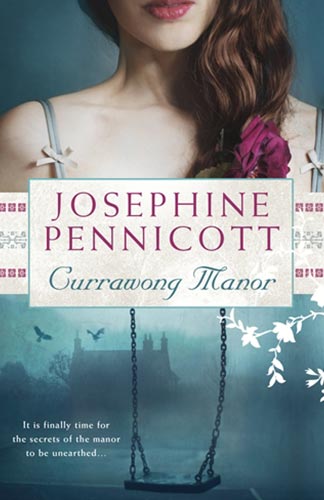 Author: Josephine Pennicott
Publisher: Pan MacMillan Australia
Copyright Year: 2014
Review By: Diana Olsberg
Book Synopsis: This is an enchanting book. Enchanting because of the wonderfully detailed descriptions of life in Sydney and in the nearby Blue Mountains immediately following the end of World War II. But also enchanting because of the carefully unfolding mysteries of the extraordinarily engaging characters who inhabit these pages, and who are entangled in a complex jigsaw of emotional intrigues and personal crises.

I delighted in the pace of the book – an interesting narrative for the first 200 pages which then turned into a breathtaking page turner for the remaining almost 200 pages. I couldn’t put it down, as like peeling the layers of an onion, Pennicott slowly reveals the dark secrets of the household of Currawong Manor – the tangled web of secrets long held and people’s indiscretions affecting what eventually turn out to be four generations of residents.

We are initially introduced to the cast of characters at the funeral of a woman who had been one of the muses of a notorious artist, a funeral attended by present and erstwhile members of the household at Currawong Manor, and newly arrived protagonists whose arrival and probings become the catalyst to unveil the mysterious past. This is a scenario so reminiscent of some of the best Agatha Christie classics. The main setting of the book is the somewhat dilapidated Currawong Manor in the Blue Mountains, where a series of mysterious disappearances and flamboyant residents have long made the Manor the focus of superstitious gossip in the nearby village and community of Mount Bellwood.

Pennicott takes enormous risk in letting the story unfold mainly through transcriptions of tape recordings by Ginger Flowers, one of the most flamboyant central characters of the book. It could have been boring. But instead, the reader becomes immersed in the immediacy of images and emotional responses – one can almost hear the intonations of the character talking and feel the passions, the disappointments and the joys of the imbroglio of the past 70 years. But this is not all. She and the other characters find plenty of action in their present day explorations of past mysteries, thereby avoiding mere sentimentality and rather keeping the reader breathless as the story unfolds.

The author Pennicott reveals herself as a master social historian. I loved the details of day to day life at the end of World War II, the American servicemen, the young US naval men or “doughboys” as she calls them “overpaid, oversexed and over here” – a frequent lament for 1940s Australians. The minutae of household interiors and surrounding gardens and bush woods, conjures up for the reader a feeling of actually being there, even feeling oneself the sense of foreboding and danger which Pennicott draws out so well. The evocative descriptions of food and mealtimes were a delight – one I liked particularly, “simple food grown in nature and transformed by Doris’s irresistible and unforgettable alchemy” – says so much about the power of the character.

The pivotal character of the notorious artist and accounts of his artistic expression allows Pennicott to display a thrilling intimate knowledge of what so many books and documentaries have revealed on the contemporary lifestyles of those now icononic painters, sculptors and potters of the flowering of Australian creativity and bohemian lifestyles of the twentieth century.

I loved the book. I found it to be at times a full blown horror mystery with twists and turns sometimes entirely unexpected, and at other times fascinating in recounting the drama and intimacy of people’s personal relationships. I was sad to finish the book, and Pennicott’s larger than life characters became so real and engaging, I miss them. Maybe a weekend trip to the Blue Mountains is in order. Just walking the streets I can cogitate that some of the locals I pass indeed may have and do themselves inhabit households with intriguing histories such as this !!