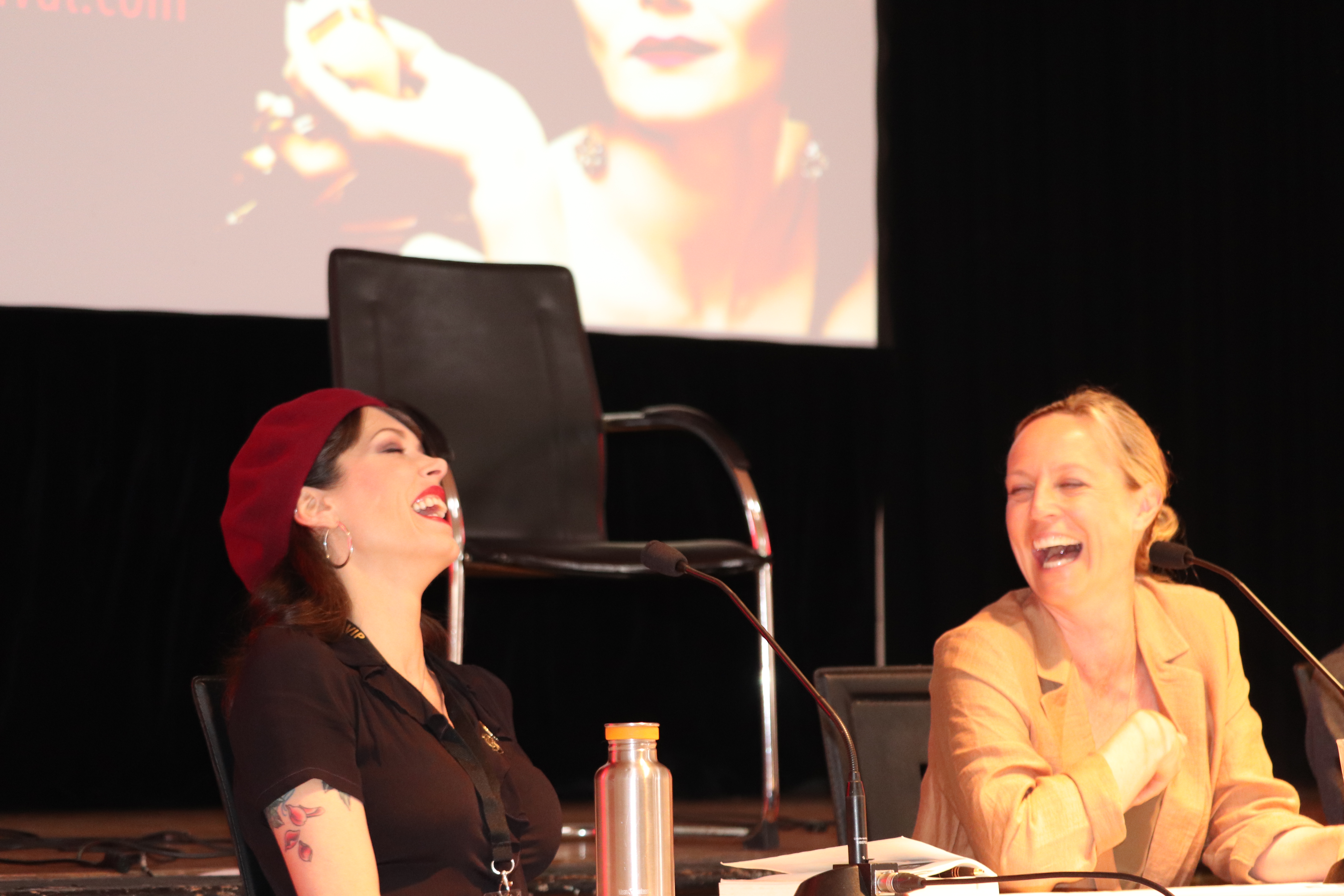 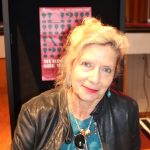 Sydney Sister in Crime, Ann Penhallurick, reports on the Murder She Wrote, part of the festival at the Huon Valley, Tasmania, 31 October-5 November, 2019. 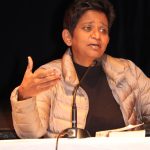 “I have been utterly shameless,” declared Shamini Flint, author of the Inspector Singh series, and shoot-from-the-hip speaker at Murder She Wrote. Flint was referring specifically to sending her somewhat lazy but always insightful Sikh policeman out of his Singaporean home to places Flint herself likes to visit, but there was plenty more shamelessness to be savoured – along with large amounts of delicious food – at the inaugural Terror Australis Festival. 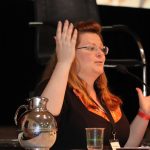 The up to six-day event for writers and readers was held in Cygnet, a small town with a strong community in the beautiful Huon Valley, south of Hobart. Archaeologist, author and fabulous festival organiser, L.J.M. Owen and the similarly fabulous and relentlessly energetic team of volunteers – many from the local community – put together a festival that was alternately spine-chilling and laughter-inducing, always thought-provoking and reasonably often secret-shattering. 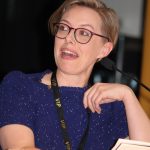 No individual author revealed all, but in two days of masterclasses and workshops (Thursday 31 October-Friday 1 November), developing writers of all ages had the chance to learn about the usually cleverly hidden mechanics of literary, short story, screen, and above all, crime and mystery writing from the authors themselves. While, in a nearby venue, others grabbed the opportunity for some training with Jack Heath (Hangman, Hunter), and then on to pitch to three publishers – Lindy Cameron of Clan Destine Press, Lucy Bell of Pantera Press, and Angela Meyer  (pictured left) working with Echo Publishing, Bonnier Zaffre.

Saturday and Sunday (2-3 November) brought together various thoroughly engaging authors – and one star actor – for panel sessions on and around topics such as ‘Picking your poison’, ‘Motive’, ‘Means’, ‘Opportunity’ and ‘Marple vs Holmes’. 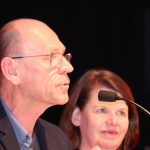 Each panel session was more of a conversation, with pleasingly blurred lines between interviewees and interviewers/mediators, and a good amount of audience question time. This was enabled in part because so many crime and mystery writers have had and still have other lives – for example, authors Meg Keneally (the Monsarrat series of historical crimes,  pictured left with David Owen) and Debi Marshall (true crime) unobtrusively demonstrated the power of their journalistic practice, while DI ‘Pufferfish’ Heineken creator David Owen quietly showed his skills in diplomacy (his day job is with the Governor of Tasmania). With such well-run sessions, and such entertaining speakers, a great deal was covered. So, here’s a few tasters… 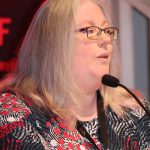 The question of what triggered authors’ story-telling, and their chosen themes, came up several times. Responses differed – Tansy Rayner Roberts/Livia Day (pictured left) wanted to leave aside the stereotypical dark history and explore her home-town, Hobart, in its contemporary and ‘cheerful’ (albeit body-splattered) manifestation, while Shamini Flint started writing to complicate a life of full-time mothering. Flint is also inspired by themes, such as terrorism versus murder. “Terrorism,” she says, “breaks the nexus between victim and perpetrator.” 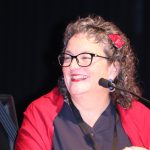 Angela Savage began to write crime, after years of working overseas, knowing “no-one … was interested in my travel stories”. Her sassy PI, Jayne Keeney tangles, however, with the dark side, the Thailand behind the bright travel posters. 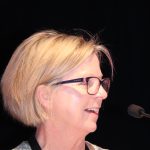 Scene and setting emerged as deeply considered – and well-researched –  scaffolds for stories. Joanna Baker  (pictured left) spoke of Hobart as “an absolute gift to a writer, multi-layered, pressed in between two enormous emptinesses”. The conception of landscape as a character came up from audience and panellists alike, and Shamini Flint explained that, in her way of thinking, the motive for each crime in the Singh series is peculiar to, a product of, the particular setting.

Meanwhile, L.J.M. Owen noted the need for more complexity in victims – “every person who suffers in life responds differently,” and Marta Dusseldorp (a.k.a. television’s Janet King), demonstrated this clearly in talking about the difficulties of representing a Holocaust survivor against the grain of current expectations; presenting her authentically as tearless, rather than overtly emotional.

In all this, the lady never vanished, although the gendering of characters, plot, writing and reading were discussed in a conversation that touched on how she had done so, more than once, in the dark, Hitchcockian past. 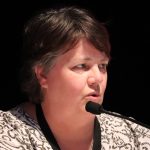 At Murder She Wrote, however, inclusivity was key – we had lesbian heroes (Sisters in Crime’s own Lindy Cameron’s Kit O’Malley), ordinary Sikhs, who become people of colour in another country (Flint’s Inspector Singh), heroes with disability (Emma Viskic’s Caleb Zelic, although Viskic herself was only present at TAF in spirit), ageing women (Miss Marple, natch), drug addicts (Holmes is only the beginning), men with strange obsessions (Jack Heath’s Timothy Blake, FBI agent is a cannibal), and many more. Crime is genre plus possibility. 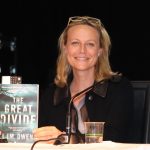 There was plenty more to wet, and satisfy, appetites – a highly entertaining conversation with Tara Moss and Angela Meyer, on Tara’s new book (and start of series) Dead Man Switch; the launch of L.J.M. Owen’s latest, The Great Divide by Marta Dusseldorp; book signings with all the authors who graced the stage, as well as a whole day book and author mini-fest, the Hall of Writers, on the Friday. Not to mention everyone getting out the feathers for Noir at the Bar (Friday) and the murder mystery dinner (Saturday).

Finally, it’s well worth noting that integral to this particular festival were events which brought local community and visitors together. Your intrepid reporter, for example, got to play a grumpy witch, keeping the huge, enthusiastic crowd in a literal line so they could safely enter the community hall for the Halloween party. Four hundred people frocked up for that event, the winner of the Children’s Writing Comp was announced, and the free community program of book launches and writing events was kicked off in style (with thanks to the doyen of décor, Susie Mannigan and her team).

And there’s more – the main program was followed by two days of food (including cooking classes), art and culture, (including book-binding classes), showcasing the local region.

All in all, the inaugural Terror Australis Festival was an absolute treat for any crime aficionado. Bring on 2021 and the next one!